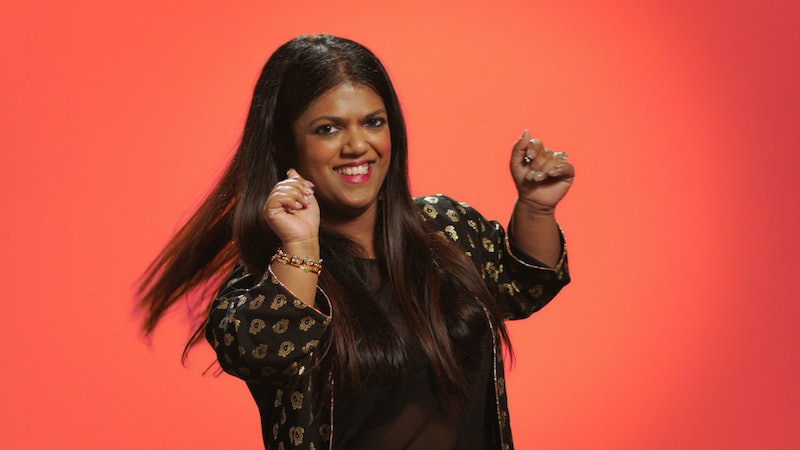 Ruksana Carroll isn’t featured prominently in The Circle’s Season 3 trailer, but what she lacks in screen time, she certainly makes up for in energy. “I am here!” she announces loudly as she strolls through her private Circle apartment. The next time we see her, she’s sitting on a couch in a basketball jersey and shades, arms raised and — once again — screaming.

The 35-year-old’s infectious personality is evident from the first time she shows up onscreen, reminding producers they have her Bollywood playlist and that she wants an epic song played during her entrance. “If I could be the lead girl in a Bollywood movie, I would die,” she says later.

As Ruksana explains, she’s 4’4” and has a condition called achondroplasia, which is a form of dwarfism. “It’s not that big of a deal. I’m short. Hey, I bet you can’t hop up on a speaker in a club and dance. I can,” she laughs.

Heading into The Circle, Ruksana plans to be “100% authentic,” because “real recognize real at the end of the day.” Here’s what else to know about the mom of one.

Ruksana says on the show that she’s from Union, New Jersey, but she seems to spend a lot of time in nearby New York City. Her Instagram shows her galavanting through Times Square, Central Park, and across the bridge in Brooklyn.

Her page also gives some insight into her family. She recently posted her daughter Yaara’s school pictures with the caption, “Angels are often disguised as daughters.” And when she came across a billboard in Times Square that was playing the trailer for The Circle Season 3, she took a photo of it paused on her face, writing, “The look when you made it. this is for my daughter.”

In April 2020, Ruksana launched a YouTube channel, where she posts videos about topics including interracial marriage and life as a little person as well as shares TikToks of her and her daughter talking about their relationship.

Ruksana Has Been On Reality TV Before

If Ruksana seems pretty comfortable in front of the camera, it’s because The Circle isn’t her first reality TV appearance: she’s competed on Family Feud twice before. “Our family was recently selected to be [a part] of a special tournament on Family Feud again,” she captioned an Instagram photo from the Family Feud set with Steve Harvey in November 2019. “Unfortunately we didn’t win this time around but we were blessed for this second opportunity and honored to be apart of the Family Feud Family.” At least we know she can take an L if it doesn’t go her way on The Circle.