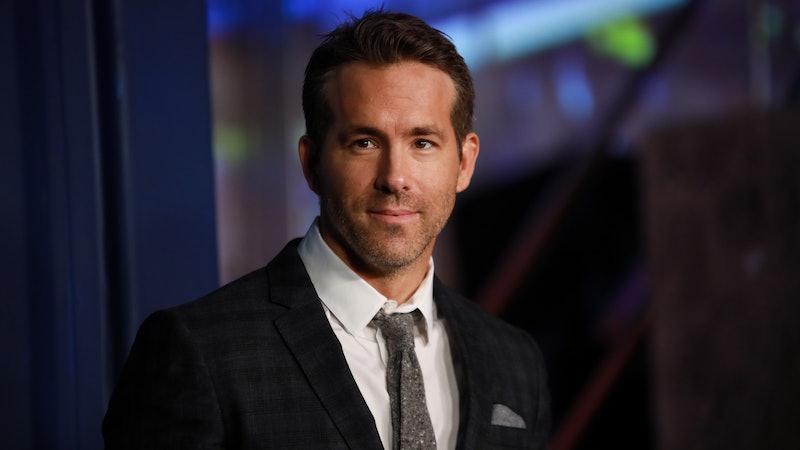 In hopes of convincing young people in his home country of the dangers associated with not social distancing, Ryan Reynolds asked young Canadians to stop partying during a pandemic, so they hopefully won't continuing spreading COVID-19 and, you know, kill his mom in the process (his words). His message is serious, but, of course, in typical Reynolds' fashion, he took more of a joking tone in hopes of getting his important point across to young individuals, specifically those in his home province of British Columbia.

After British Columbia Premier John Horgan asked Reynolds and Seth Rogen on Aug. 12 to help him persuade younger individuals to stop going to large parties, the Deadpool star rose to the occasion and recorded a voice memo that he tweeted on Aug. 14 and captioned, "Called your office. Left a message." He began by clarifying he's not the best person to get "medical advice from," except if it's for "plastic surgery," since he "used to be Hugh Jackman."

Reynolds continued, "Young folks in B.C., they’re partying, which is of course dangerous. They probably don’t know that thousands of young people aren’t just getting sick from coronavirus, they’re also dying from it too." He added, “It’s terrible that it affects our most vulnerable. B.C., that’s home to some of the coolest older people on Earth." He included both his mom and environmental activist David Suzuki in the mix of those "coolest older people."

Then, he really hit the jokes hard by discussing his mom. "My mom, she doesn’t want to be cooped up in her apartment all day," he said. "She wants to be out there cruising Kitsilano Beach looking for some young 30-something Abercrombie burnout to go full Mrs. Robinson on. She is insatiable. I hope young people in B.C. don’t kill my mom frankly. Or David Suzuki. Or each other."

He didn't stop there, either. Reynolds also added a bit about his wife Blake Lively's 2007 drama Gossip Girl. When referencing how much he loves parties, Reynolds joked, "My favorite thing to do is sit alone in my room with a glass of gin and the first 32 seasons of Gossip Girl. That’s a party."

Horgan retweeted Reynolds' audio message and wrote, "You with your mom jokes, me with my dad jokes, just trying to keep people safe. Thanks, Ryan. xoxo." Rogen also followed in Reynolds' footsteps by tweeting on Aug. 15, "People of British Columbia! Please do not go out to parties and BBQs and other large gatherings! The COVID is still out there! It’s more fun to hang out alone and smoke weed and watch movies and TV shows anyway! Do that instead! Thank you!"

At the time of publication, the most recent government data reports British Columbia has over 4,300 coronavirus cases, and Canada has a total of 121,889 cases compared to the United States topping five million cases. In the words of Reynolds, "Let’s not kill anyone. I think that’s reasonable."