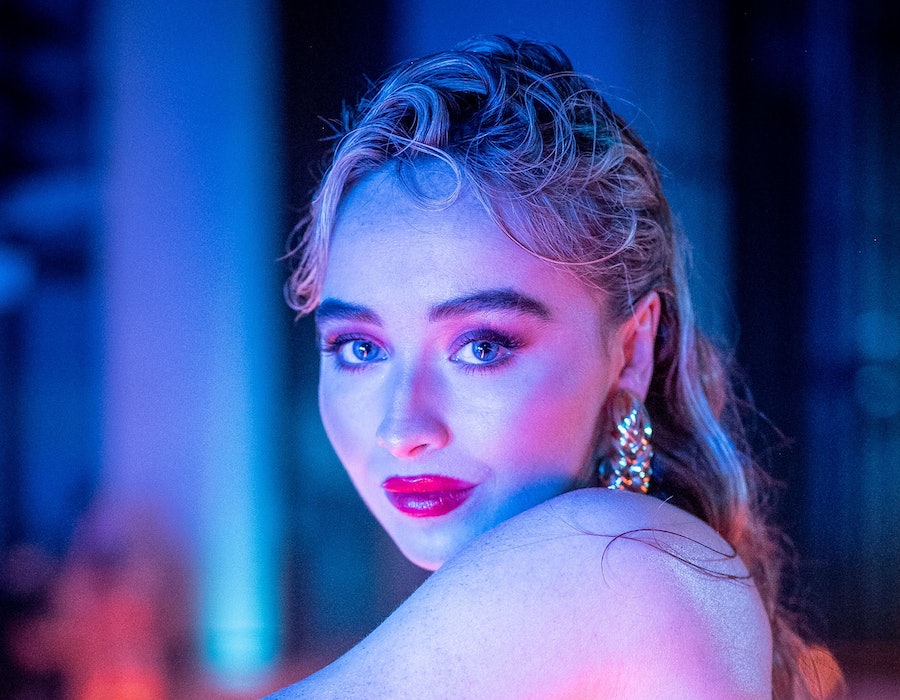 Sabrina Carpenter is here for a good time, a fast time, and hopefully a long time. “Fast Times,” Carpenter’s boppy new single — a “driving-in-the-car-with-your-friends kind of song,” she tells Bustle — arrives on a plate already piled high with projects. That includes her forthcoming album (which she swears is “coming soon”) and at least two feature films: The comedy-thriller Emergency, in which she plays a college girl searching for her lost sister, debuted to favorable reviews at this year’s Sundance Film Festival and hits Amazon Prime Video in May; a musical based on Lewis Carroll’s Alice in Wonderland, which Carpenter will produce as well as star in, is in early stages. The latter, which she pitched and sold to Netflix via video chat (“I had to sing for them over Zoom!” she says), takes place at a Coachella-like music festival called “Wonderland.” And while her lips are sealed on further details, she guarantees the final product will be something “no one’s ever seen before.”

The 22-year-old has been booking acting gigs since 2011, but it was three years later, when she nabbed a part in Disney Channel’s Girl Meets World, that Carpenter’s career really began gaining steam. Since then, she’s been releasing music and landing acting gigs at a steady clip, taking full advantage of the Disney pipeline. Not that she’s just like every other actor who’s stopped by the House of Mouse on their way to superstardom. “There’s so much more than the Disney blanket,” she says. “I think it’s very easy to compare where I came from with others, but we’re all on our own journeys.”

And it’s not all work and no play, either. Carpenter still finds time to be a 22-year-old, even if she’s not the party animal she often plays onscreen. “I recently went to my first party party in a while and I was like … how do people do this anymore? It was so loud and I couldn’t even hear or see anyone,” she laughs. “Intimate gatherings are so much more fun for me, especially with the right group of people.”

After performing a private concert at New York City nightclub Le Bain tied to the launch of Samsung’s first Galaxy Creator Collective, Carpenter spoke with Bustle about her new projects, her love of Hall & Oates, and wanting to chase people with a chainsaw.

I read that the writing process for “Fast Times” began with “sampling a tequila bottle and playing drums with some pencils.” I feel that mood reflected in the song. How do you imagine your fans listening to the single?

My producer John Ryan, who produced this song and a few others, was like, “The best thing is to picture your fans getting ready to your music.” Obviously, there are songs I’d want them to listen to when laying in bed and crying over heartbreak, but I think this song is beautiful and motivating, but also fun. It encourages you to take life a little less seriously. So I picture my fans listening to this song while getting dressed and pumping themselves up, or even screaming it in the car with their friends. That’s the way I’ve experienced the song, so hopefully they’ll do the same thing.

I think the kind of music a person listens to when getting dressed says a lot about them.

Totally, you’re right! I love playing Hall & Oates when getting ready in the mornings. I feel like that’s pretty niche, so I wonder what that says about me.

When can fans expect a new album? How will it be different from your past music? Are there new sounds or themes you’re tackling?

It’s so hard to describe music without listening to it, so keep that in mind as I’m about to describe it [laughs]. I think the main difference is that I focused on the idea that no one is who they were when they were 18 or 19 years old. And no one is the same person when they were 22 years old, which is how old I am now. We’ve all been through a lot of extremes, and that was helpful in a lot of ways for my growth, not only as a person, but also as an artist. So I used that idea and put it into my music.

A common thread I’m noticing in your recent work, like “Fast Times,” Emergency, and even the new Alice in Wonderland, is partying and having fun — not taking yourself too seriously. Would you say that’s true to where you are in your own life right now?

I think that’s the mentality that you almost start to grasp at 20 or 21 years old. So that’s definitely what I try to do, just accept things as they come to me, and find the beauty in all of it and use it to inspire me. With partying, I’d say yes and no. I hate parties, but I do think there’s something about exciting nights and creating memories with people, or nights that make you feel alive and connected to yourself, that I have been experiencing a lot, and I think has been cool to use that to tell stories through my work.

Totally. I was just talking about this today, but I was a fan of just about all of them. They all had such an impact on me wanting to do what I ended up doing, which is so crazy that I got to do it. But yeah, any performer that has come from this place and has had the opportunity to grow and become the artist they are now knows how hard it is, and how tricky it can be. A lot of people have preconceived notions of [child stars], but so many of them are still successful today. Christina Aguilera was one of my first inspirations, so she’s a huge one for me.

As it's been discussed at length, some former Disney stars, like Britney Spears, had a rough go of it after their time on in the public eye. Do you feel any camaraderie with people like Britney, who’ve also had to grow up in the spotlight, and struggled?

I can’t really compare anyone’s journey to mine, especially Britney’s; she’s had such a different journey than mine. I think she’s incredible. I would say if anything, it just gives me perspective. I’m so grateful to have a support system around me, and to be able to do what I love. Like I said, it’s not easy. We’re met with so many different obstacles along the way, and we’re all just trying to understand life and make it through in the ways we can.

You’re a singer, actor, and you dance. What’s one thing you haven’t done yet that you’re dying to try?

Honestly, just for one day, I’d love to be a character for Halloween Horror Nights at Universal Studios and scare the sh*t out of people. That’s like a secret thing I’ve always wanted to do, for no reason other than to entertain myself on a weekday night. I just want to rev up a chainsaw and chase people … a fake chainsaw, though.