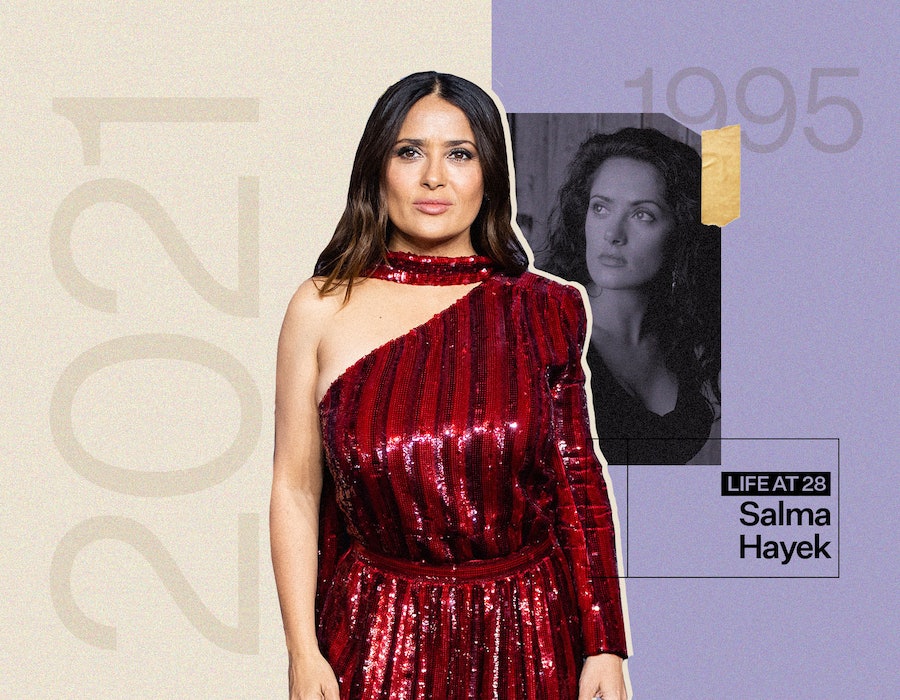 In Bustle’s Q&A series 28, successful women describe exactly what their lives looked like when they were 28 — what they wore, where they worked, what stressed them out, and what, if anything, they would do differently. This week, sidle up to Salma Hayek, whose stateside career was just getting started.

You couldn’t pay Salma Hayek to go back to being 28. “I'm very comfortable with my age now, and I was very comfortable in my 40s,” says Hayek, who’s 55. “But I have to say, getting closer to 30 was extremely hard.” At the time, the Mexico-born actor had wrapped her first major movie, Desperado, an action extravaganza with Antonio Banderas, but her schedule felt eerily empty. She was living in Los Angeles with no follow-up on deck, no partner, not even a home of her own.

“I put a lot of pressure on myself, but also, the way the world operates puts a lot of pressure on women,” Hayek tells Bustle over Zoom. “We enter our 20s with a lot of stamina, with dreams that we want everything, and we want it fast: ‘I will find love, my career will be established, I will be getting ready to have babies by the age of 30.’ You get to your late 20s and your stamina begins to deflate, because it’s just not realistic. We’re afraid that if we don’t make it by a certain time, it gets harder and harder, or that we might never make it at all.”

Many of her dearly-held accomplishments and accolades have happened in the decades since: producing and starring in Frida, which earned two Academy Awards and a Best Actress nod for Hayek; meeting her husband, the French business tycoon François-Henri Pinault; having her daughter, Valentina, who’s 14. Now, Hayek says, she’s working more than ever and getting the roles she fantasized about in the ’90s.

“I wanted to be an actress, and at the time, they told you your expiration date was 28 — that if you didn't make it by 28, you weren’t going to make it because your career was pretty much over around 30, which was true for that time,” she says. “It’s not true now.”

We speak on the eve of her latest film, Marvel’s Eternals, in which she plays Ajak, the matriarch and spiritual leader of the superhero crew. Hayek shares stories of late-20s angst, the best advice she’s ever gotten, and her “very naughty and illegal” Friday night ritual.

“I got all this attention, but nobody was offering me jobs.”

Take me back to 1994, when you were 28. How were you feeling about your life and career?

At 28, I had already done Desperado, and I thought, “I've made it.” They paid me very little money and I spent it really fast.

What did you spend it on?

Banana Republic, The Gap. This was the ’90s. I figured, they’re going to be throwing movies at me. It didn’t happen. I got all this attention, but nobody was offering me jobs. So by the time I was getting closer to 30, I was depressed. I had broken up with my boyfriend. Everybody knew who I was, but I was not getting respect from the industry.

How did you cope with that?

I didn’t cope with it well. I was sad. I was also very famous, so would get recognized on the street. I didn’t have privacy anymore, but I also didn’t have the career, or the money, or the respect. I put a lot of pressure on myself: “I’ve gotta get a house, I’ve gotta get a roof, I’ve got to get a child.” There was just so much pressure.

What was your escape? What did you do for fun?

I used to do something very naughty and illegal. I think I can say it now, it’s past the statute of limitations. I can confess. I used to go to the multiplex at noon and get a half-price matinee movie ticket. I had a chart of all the movies playing that weekend. They line them up so you can’t see many of them back to back, but I would hide in the bathroom, read my scripts, put on a hat or change my top, and go to another one.

Sometimes, I would watch the beginning of one movie and then go to another movie that had just started. The next Friday, I’d go back to the original movie I hadn’t seen all the way through — I’d work out the math so I’d finish what I started. I’d watch, like, four movies on a Friday night for the price of [a matinee] ticket. I’d bring snacks and water, because you don't want to draw attention to yourself at the theater. Plus, the theater snacks are expensive.

I loved it. I loved watching the movies alone. I loved the mischievousness of breaking the system.

Is there a movie that sticks out from that time, that made a lasting impression?

There was one that made an impact but not because of the movie itself: The Mirror Has Two Faces with Barbra Streisand. It was an almost empty theater. I sat in the row in front of the one couple that was there, not right in front, one seat on the side. The guy behind me started kicking my chair and screaming, “Hey, Mexican. How dare you sit so close to me? Go back to your country, get out of this movie theater.” I said, “I paid my ticket.” This time I had actually paid for the ticket. I stood my ground and said, “I'm not moving.”

I thought he was going to hit me because he just kept kicking my chair. I was alone, I was shaking, terrified, but I didn't move. I sat through the movie, although I was not even paying attention. I was so scared. But I’m very proud that I didn’t move.

You’ve been vocal about the harassment and discrimination you’ve faced in the entertainment industry. Do you think Hollywood is a better place now than it was when you were 28?

It’s a much better place in terms of diversity. We’re very far away from equality, but at least we're moving. I think it’s a lot better for women now.

Knowing what you know now, what do you wish you could tell yourself at 28?

Somebody once said to me, “Being a late bloomer is the best thing that can happen to you.” I had my child when I was 41. I found love in my late 30s, and he was so worth the wait. We’re madly in love with each other. And my career has never been better.