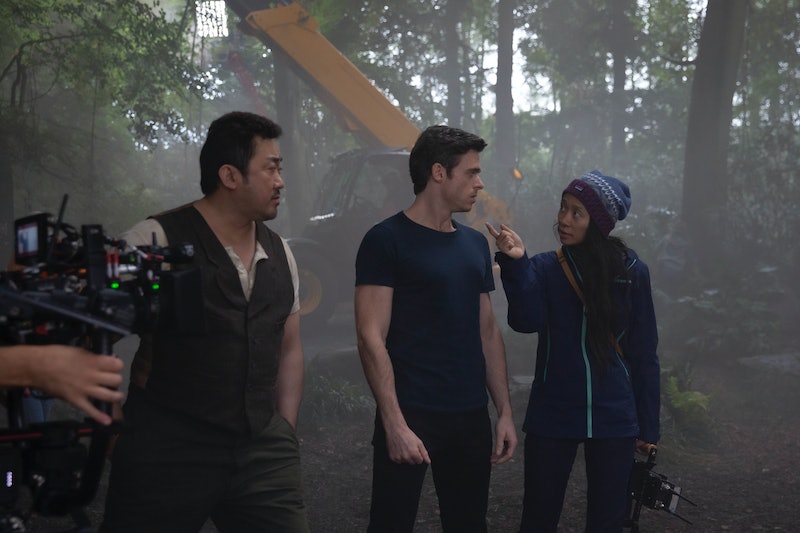 The details of Marvel Studios’ upcoming film Eternals have been largely kept under wraps. But with less than a month before the movie’s Nov. 5 premiere, Bustle can finally reveal what we learned during a visit to the set, back in early 2020.

In many ways, Eternals is a departure from most Marvel Cinematic Universe movies. Director Chloé Zhao, whose status as an indie darling was cemented after she took home the Best Director (and Best Picture) Oscars for her feature Nomadland, is usually known for her minimal, hyper-realistic approach to filmmaking. Tapping Zhao to helm a multi-million dollar superhero blockbuster might seem like a strange choice, but according to Nate Moore, Eternals producer and Marvel Studios’ Vice President of Production and Development, it was the right one.

As Moore told Bustle during the set visit, “In talking to her early on, we realized this was a true storyteller: a writer and director who had a very strong vision of what the movie could be. She pushed us, I think, as a filmmaker to make Eternals feel aesthetically different than any other Marvel movie.”

Based on what was revealed at the set visit, that’s definitely going to be the case. Below, an overview of what Bustle learned on set, from the contours of the movie’s plot to the Eternals’ individual personalities.

Moore was careful to avoid too many spoilers, but teased some elements of the film’s plot, including its source material. Moore said that the story is based more on Jack Kirby’s original Eternals comics, as opposed to the run that writer Neil Gaiman helmed.

“I think there’s the expectation that this movie will probably borrow a lot from [Gaiman's Eternals]. But the truth is we actually are more inspired by the Kirby stuff, so we're going back to the old stuff both mythologically and how the movie lays out,” Moore said. “But we do change some of the Kirby mythology, and our movie takes place over two time periods. There's a past storyline and a present storyline.”

The Eternals are immortal aliens from the planet Olympia, who’ve been asked by the Celestials to come to Earth to rid the planet of creatures called the Deviants, whom Moore explains “are these parasitic aliens who go from planet to planet. And as they kill the apex predators on a given planet, they take the characteristics of those predators and wipe out intelligent life.” One of the “past” storylines shows the Eternals arriving on Earth to begin their mission of exterminating the Deviants. While they are initially successful, over time the Eternals begin to drift apart as a team.

When the story jumps to the present, the Eternals, now separated, are shocked when they learn that the Deviants have reappeared — and evolved. “The present is very much a mystery of why the Deviants [are] back,” Moore adds. “Why are they different, and can [the Eternals] get the band back together — for lack of a better term — in time to stop this new threat?”

The screenplay, co-written by Zhao and Patrick Burleigh from a story by Ryan and Kaz Firpo, was finalized late in the pre-production process; much of the cast signed onto the film without even reading the script.

Salma Hayek plays Ajak, whom both Hayek and Moore describe as “the matriarch of the Eternals.” Hayek feels that Ajak is a benevolent and maternal leader, but is quick to point out that she’s by no means “the boss” — instead, Ajak uses her authority to guide her subordinates, not dominate them. “She's the leader of this group of people that have a mission, and it is my responsibility to make sure that it's accomplished and that they behave,” Hayek said. “There are levels of love, of caring, and empathy, not just the mission, but more so the family that is doing this mission. I have a different relationship with each one of [the Eternals], like you do with your kids.”

Hayek went on to describe her “kids”: “Kingo [played by Kumail Nanjiani] is the most vain of them all, and the attention seeker ... And then, Thena [played by Angelina Jolie] is the mysterious and — she's mysterious and you never know what's going to come out in her, because she is the strongest and in some ways, the more fragile. And that's the beauty in her, and this is why I watch out for her ... And then Ikaris [played by Richard Madden] is the perfectionist. He has to do everything perfect, you know, he's very almost like the obsessive compulsive one of the family. And then Gilgamesh [played by Ma Dong-seok] is the one with the good heart, the kindest one with the good heart. And I know my Sprite [played by Lia McHugh] has an attitude, and is sarcastic, and a little bit of a smart-ass sometimes ... Druig [played by Barry Keoghan] is the dark one that is always overthinking everything, that asks a hundred questions. And then Makkari [played by Lauren Ridloff] is the one that has to know everything. Has to know all the facts ... [Phastos, played by Brian Tyree Henry] might have to limit the technology time because if I don't pull him out of that, he can just stay there until he dies ... Sersi [played by Gemma Chan] is my sweet, lovely girl.”

Eternals’ production design could best be summed up as an intersection between old and new — that is, a mixture of inspirations pulled from both 5,000 B.C.E. and the present day.

Eternals used natural landscapes as much as possible — a novel approach for a Marvel film, which typically rely heavily on greenscreens and CGI. Moore credits this decision to Zhao, whose previous films employed similar techniques.

“[Zhao] likes to shoot a lot of natural locations with natural light. Actually, this film has shot outside exteriors more than any other Marvel film. And I think it's lent a look that's unlike anything we've ever done,” said Moore.

Eve Stewart, Eternals’ production designer, said that Zhao’s preference for real sets helped the cast. “Because [Zhao] comes from independent filmmaking, she felt very strongly that a lot of the sets should be physical,” Stewart said. “And the actors loved that. A lot of them said they felt much more able to focus on the story rather than constantly thinking, ‘oh, what's behind me?’ It's all here, so they're in the zone. That really helped.”

Stewart also recalled how she and Zhao worked to create a look that was distinct from previous MCU projects. For a spaceship used by film’s heroes, Stewart said Zhao pulled from geometric motifs. “The Celestials are Gods and they’ve created the Eternals, so we wanted to look at sacred geometry, and look at the symbolism from every religion across the world that kind of means something,” Stewart told Bustle. “We found out that triangles and circles are a particular shape that come up in every single religion around the globe. So that was our starting point.”

The team also looked to natural, celestial materials. “I went for weeks to the science museum here, looking at meteors and moon rocks and all sorts of stuff. In the end, we decided to go with the kind of dust that trails meteors. And what was really exciting is that only a few weeks ago, it was revealed in the press that stardust was found from a meteor that just landed,” Stewart said. “It’s a very new kind of material, and it was exactly the same color. It was like we had a premonition.”

Unlike Captain America or Wonder Woman, who have well-known, signature looks, Zhao, Moore, and Eternals costume designer Sammy Sheldon Differ had more room to experiment with the Eternals’ costumes.

“We did a complete redesign,” said Moore. “We wanted to have the costumes feel like they’re both ancient and timeless, and had some technology to it. We also wanted to pay homage to Jack Kirby in the circular designs of his original artwork, but also felt like something that could be their own.”

Like the production designers, the costume team also looked to the cosmos for inspiration. “We looked into the universe, and nebulas, and minerals, and earth, and galactic, and tried to pull some texture together that gave it a surface that didn't look like it was just a fabric,” said Sheldon Differ. “Everything is hand-painted and hand-printed. For the fabrics, we started off with some paintings that we made out of oil paint and metal powders to try and recreate paintings that look like the universe.”

Eternals will premiere in theaters on Nov. 5. Tickets are available now.