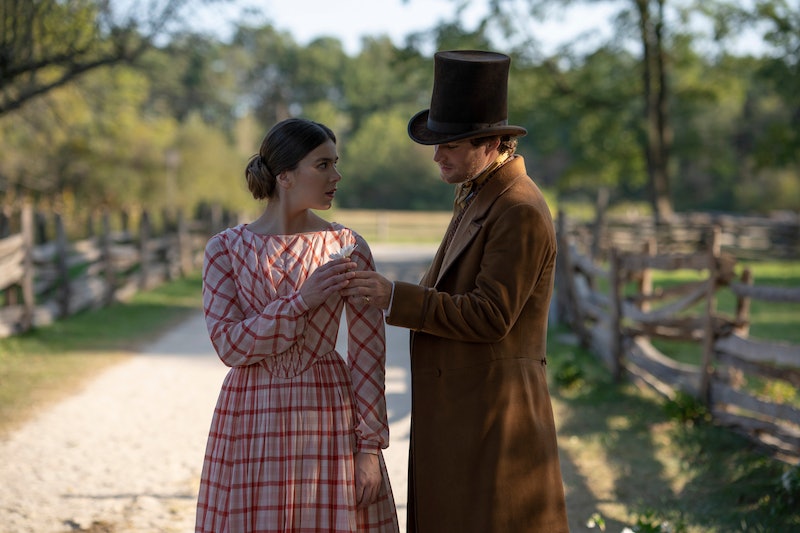 In Season 2 of Dickinson, Emily Dickinson (Hailee Steinfeld) wants to do more than just write poetry; she wants to publish her work and be established as a poet. The opportunity to be published comes in the form of Samuel Bowles, the editor of the Springfield Republican and a man who loomed large in the real Emily Dickinson's life.

Introduced in the first episode of Season 2, Bowles (played by Iron Fist and Game of Thrones star Finn Jones) is all ego and charm, eager to indulge Emily in her art, and a bit opaque in his machinations. Much of what we know of him is filtered through his professional career, much like the real Samuel Bowles, who was born in 1826, about a year after his father founded the Weekly Republican newspaper in Springfield, Massachusetts. That newspaper quickly became his life: when he was 17, his father made him an office boy in the Republican offices instead of sending him to college.

While he didn’t have the skill to be a printer, he did — like Dickinson’s Samuel — have the gift of charm and persuasion. At 18, he convinced his father to make the Republican daily, on the condition that Bowles would be the one to run it.

Under Bowles’ guidance, the Republican became a paper of note. As his biographer would write in 1885, “The editor [Bowles] conquered his environment. He did it by making so good a newspaper that people had to buy it. By industry and skill he won the opportunity for independence.”

Through his work on the paper, he became “the first guest in [the] newly married home” of Austin and Susan Dickinson, dubbed The Evergreens. It was on one of his visits that he met Emily Dickinson, and became her good friend and frequent recipient of her writing.

As Susan notes in Episode 1, Bowles liked to publish women, and actively advocated for both women’s suffrage and the abolition of slavery. Dickinson is thought to have sent him some 40 poems personally, and he ultimately published seven separate poems in his newspaper. Although they are often at odds in the show, Dickinson believed Bowles could see what others could not, stating that "his nature was Future."

Although Emily in Dickinson appears to be attracted to Samuel, in real life the exact nature of their relationship is still hotly debated. Bowles is believed by some Dickinson scholars to be the subject (or intended recipient) of the so-called “Master letters,” a series of deeply emotional letters Dickinson never sent that were addressed to someone only called “Master.” At the very least, the two enjoyed a close friendship, with Bowles being the only person outside the family whom Dickinson would speak to after the 1860s, when she rarely left the house or entertained guests.

Unlike in the show, in real life Emily Dickinson was quite close with both Bowles and his wife, Mary (who is only sparsely featured in Dickinson Season 2). When Bowles died in 1878, Dickinson wrote in a letter to Mary that: “Dear ‘Mr Sam’ s very near, these midwinter days. When purples come on Pelham, in the afternoon, we say ‘Mr Bowles’s colors.’ … Not that he goes—we love him more who led us while he stayed.”

More like this
Maxim Baldry Plays This Pivotal Role In 'The Lord Of The Rings' Universe
By Maxine Harrison
'Firefly Lane' Season 2 Will Be The Show's Last — But There's A Twist
By K.W. Colyard and Grace Wehniainen
'The Rings Of Power' Episode 7 Will Feature An “Unlikely Pairing Of Characters”
By Grace Wehniainen
Rhaenyra's Sons May Not Last Much Longer On 'House Of The Dragon'
By Grace Wehniainen
Get Even More From Bustle — Sign Up For The Newsletter