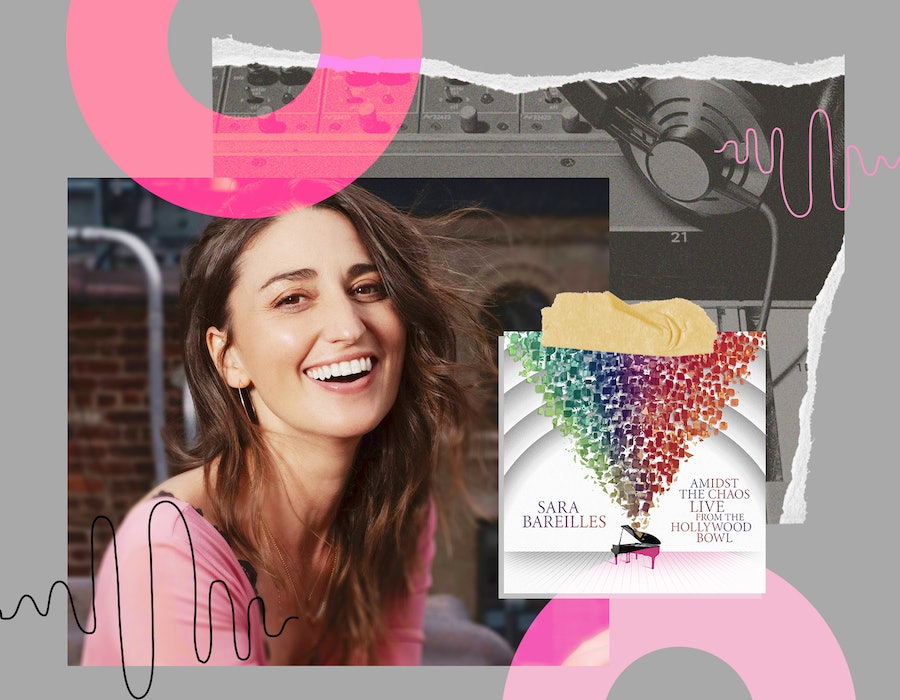 Before Sara Bareilles was a household name, she spent her days rehearsing in a rented storage unit and shuffling between open mic nights with her keyboard wrapped up in her bedding. She sang anywhere that would have her; at bars, tiny venues, even a Chinese restaurant. “People were eating egg rolls while I was singing my heart out,” Bareilles tells Bustle of her nights performing at the LA restaurant Genghis Cohen. “Another place I performed at had a stripper pole in the middle of the stage. It was a very, very long slow road [to today].”

The Northern California native first skyrocketed into fame in 2007 with her near-ubiquitous hit “Love Song.” “It was a complete shock to me and to the label that it was successful,” Bareilles says. “I don't think anybody was expecting the song to resonate in the way it did.” It took the singer-songwriter a few years to get her bearings after rising to fame. “I was so worried that somehow I was going to ‘sell out’... I spent a lot of time [in my early 20s] with my dukes up and it was a little bit exhausting.”

Eventually, she found her own rhythm. Then came the Grammy nominations, the cross-country tours, and a foray into theater writing the music for the smash-hit Broadway musical Waitress. Now, she’s simultaneously releasing her live album Amidst the Chaos: Live from the Hollywood Bowl while making her TV debut with Peacock’s Tina Fey-produced comedy Girls5Eva.

Days on the set of Girls5eva, which follows members of a ‘90s girl group now in their 40s attempting a comeback, were a blur of singing and laughing with her fellow cast members. You’d never know this was Bareilles’ first time acting for television from her portrayal of Dawn, the show’s anxious, beating heart. “I immediately saw similarities between Dawn and myself. She comes to the realization that there might be more for her and that is worth expressing,” Bareilles says. “I related to that myself.”

Below, Bareilles discusses her musical theater phase, her love of ABBA, and the song she’s most proud of.

On Her First Open Mic Night & the Catharsis of Girls5eva

Your new live album was recorded at the Hollywood Bowl. What about that venue was special to you?

I moved to Los Angeles from Eureka, California, a very small town that I grew up in, in Northern California. As a freshman at UCLA my roommates and I went to see a show at the Hollywood Bowl, so that was one of my first live music experiences in LA. I was mesmerized. For anyone who has never seen a show at the Bowl, it’s a cathedral set in the mountains — so staggeringly beautiful. The design of the bandshell is extraordinary, there’s just a warmth that emulates from that venue.

What were your early days as an aspiring singer-songwriter like before you were playing these huge venues?

I went to UCLA and by my senior year I knew I wanted to be playing music. I had been a part of an a capella group, singing with people, that’s how I met my first bandmates. My very first show was an open mic at Molly Malone’s on Fairfax. I did not invite a single soul — I went by myself with my keyboard because I just wanted to prove to myself that I could do it and I did. Then I played hundreds and hundreds of shows over the years in Los Angeles.

Was there a moment you felt like you really made it as a musician?

I always felt really uncomfortable referring to myself as a musician until the day I bought a case for my keyboard. I used to wrap my keyboard around in my bedspread and take it in the back seat of my car and put it back on my bed [later] and fall asleep. It was disgusting! The day I got myself a zipped case with a wheel I was like, “Wow, I'm a musician now,” but I was still playing tiny venues. When I quit my waitressing job because I was making enough money from my shows... that was a really big deal, to realize that I could make ends meet and pay my rent with music alone.

Now you’re combining music and TV in Girls5eva. What strikes you most about Dawn and this story of a girl group reuniting?

I, like so many people, experienced a lot of loss during the pandemic. I lost a very dear friend and I went into production [on Girls5eva] not long after he had passed. I was so grateful for the catharsis of laughter, I couldn’t believe the great fortune of getting to work on a comedy after going through so much loss and grief. I saw a lot of similarities between myself and Dawn but also Dawn and Jenna, the lead character of Waitress — both Jenna and Dawn find themselves inside a life they don't feel like they exactly chose. It was sort of [that] life happened to them, and I think that is a really incredible crossroads to encounter in a character. There’s so much fear of being flawed in front of people that sometimes I think we take ourselves out of the running. It’s really nice to see women taking a big swing and knowing it’s not going to go perfectly.

I really wanted You Can Call Me Al by Paul Simon, but I was a little too young to go to the record store, so my mom went to the store and came home with the wrong record!

What were your biggest musical influences growing up in small-town California?

I really am prone to phases. I had a really strong musical theater phase that was one of the early ones for me. I got very interested in Phantom of the Opera and Les Mis and Chess and The Secret Garden. There were a lot of Broadway cast albums. Then I got into a bit of a country phase in high school because we are up in the sticks where I grew up and there were a lot of country music fans out there. I really loved the pop country like Faith Hill, Deana Carter, and Shania Twain. Then I took a left turn to alternative music and Fiona Apple blew my mind and rocked my world. Radiohead was the same. I was just flipping out over OK Computer and The Bends, but the through line was the singer-songwriter troubadour types: Paul Simon, Elton John, Carole King, people like that who I still listen to all the time. I think those records are so timeless.

What is your current musical idol?

Split tie between two friends: Madison Cunningham and Emily King. I have girl crushes on both of them and they occupy very different spaces. I love their records and I'm a deep fan of both of them.

ABBA. I don't know if they would think it’s out of character, but I just love them. You could put them on any time, day or night. I think I consumed a lot of them at a certain age. It’s a nostalgic joyful time.

“Son of a Preacher Man,” by Dusty Springfield.

What’s the song you’re most proud of?

I think that writing music for Waitress was such a shift for me in terms of being able to widen my perspective to tell someone else's story. “She Used to Be Mine” was the first song I wrote for that show and there was just something really special that happened in the writing of that song, in the glue that it formed between myself and the project, the channeling of [late Waitress writer and director] Adrienne Shelly. This is going to sound new-agey, but she had passed away and I did a lot of speaking to her spirit and inviting her to come through the writing. I really feel like she did. “She Used to Be Mine” felt like a song that landed for me personally in a really unique way. To see how it resonated with others was a real surprise, and it has remained really really special to me.

More like this
Linda Ronstadt’s “Long Long Time” Plays A Pivotal Role In The Last Of Us
By Brad Witter
Here's Everything You Need To Know About The 2023 Grammys Runtime
By Grace Wehniainen
Hilary Duff's Husband Matthew Koma Has Her Name Tattooed On His Butt
By Jake Viswanath and Stephanie Downs
This 'Emily In Paris' x Blackpink Crossover Is Beyond Iconic
By El Hunt
Get Even More From Bustle — Sign Up For The Newsletter
From hair trends to relationship advice, our daily newsletter has everything you need to sound like a person who’s on TikTok, even if you aren’t.