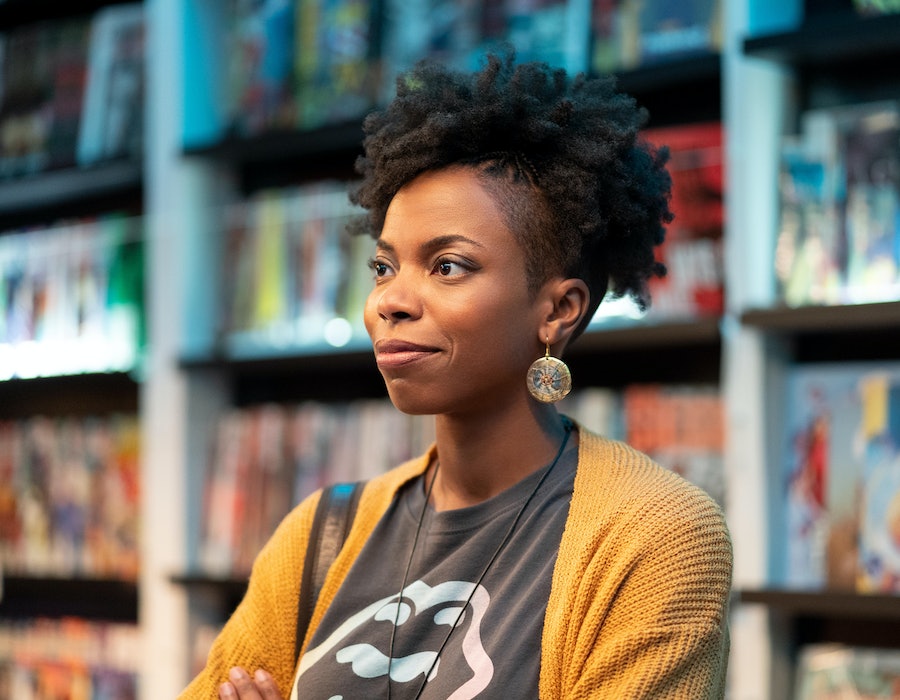 Hulu’s new series Woke centers on Black cartoonist Keef (Lamorne Morris) whose social consciousness comes to him in the form of talking inanimate objects after he’s the victim of racial profiling and police violence. But while the shooting of Jacob Blake, the death of Daniel Prude, and the deaths of countless other Black people at the hands of police make the show’s premiere feel especially timely, star Sasheer Zamata maintains that Woke would be just as relevant if it had come out last year — or the year before that, or the year before that. “These are not new issues we’re dealing with,” the comedian and actor tells Bustle. “I hope we're in a place where people are able to absorb this information and talk about it with their families, communities, and friends.”

In Woke, created by cartoonist Keith Knight about the real-life aftermath of a violent encounter with police, Zamata plays Ayana, a progressive, self-assured newspaper editor who commands a room and never shies away from confrontation. In many ways, it’s exactly what Zamata does through her own comedy. “I try to use my voice to show people where I stand on issues,” Zamata says. “People have labeled me as a political comic… I don't talk about politics specifically, but I do talk about myself. I am a Black woman and I can't imagine not talking about my Blackness. To some people that is political.”

"I am a Black woman and I can't imagine not talking about my Blackness. To some people that is political."

The Indiana native didn’t consider a career in comedy until a volleyball coach took her to see an improv show in Indianapolis. In the years following, she quickly came up through the ranks of the New York improv circuit, performing with the Upright Citizen’s Brigade and eventually landing a spot on Saturday Night Live in 2014. She was supposed to film her first stand-up comedy special in May — but then the coronavirus pandemic and its consequent quarantine happened. So, too, did a wave of protests against police brutality following the death of George Floyd. All of it compelled Zamata to rethink what she wants to say when the time comes to finally film it. “Do I want to tell all these jokes this way?” she muses. “Because the world is so different [now] and I am so different.”

While racial injustice is currently at the forefront of the national conversation, for Zamata, it's still important to find some semblance of balance and laughter. It’s part of the reason she was drawn to Woke, a project that’s about serious issues but would never be described as somber.

“You can have a conversation about race or injustice and also talk about what you just watched on Netflix,” Zamata says. “You can incorporate [social justice] into your lexicon; it doesn’t have to be weird.”