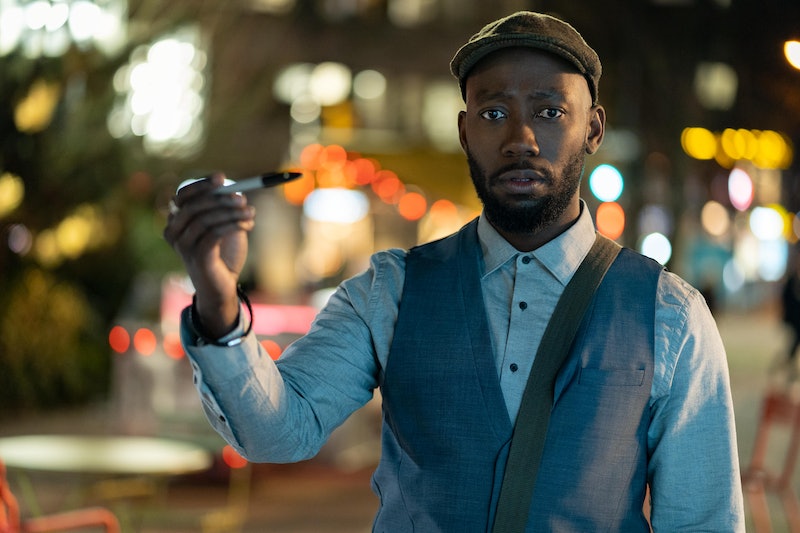 Identity, culture, and cartoons collide in Hulu's new dramedy Woke, in which Keef (Lamorne Morris) is a Black cartoonist who's comfortable "keeping it light" with his apolitical "Toast and Butter" comic strips until he's randomly accosted by cops. Then he essentially becomes "woke," noticing sociopolitical injustices everywhere, nudged along by animated talking objects. It's an experience that's directly inspired by Woke co-creator and cartoonist Keith Knight, an award-winning artist whose comic strips include The Knight Life, (th)ink, and the K Chronicles.

As Knight explained to NPR, he really was racially profiled in real life in the same way Keef is in the show's first episode. Knight was putting up playbill posters for work in San Francisco when cops mistook him for another Black suspect they were looking for. "It was a circus how many cops showed up," Knight said, noting the only description they had was "a 6-foot Black male." He was only let go because his white roommate happened to see the incident from the bus, jumped off, and yelled at the cops for detaining the wrong man. "It was a wake-up call to me because if he had been Black or brown, the way he was up in the cops' faces screaming at them and all that stuff, he would have been beaten or tasered or even worse," Knight said.

And similar to Keef, Knight's comics weren't always embedded with social commentary. Per The Washington Post, Knight was born in Malden, Massachusetts, outside Boston, and got into comics drawing Mad magazine style cartoons. He drew about being a teenage Michael Jackson impersonator, and worked as a caricature artist for hire at Boston’s Faneuil Hall Marketplace. He only headed to San Francisco after an artist friend suggested he check out the indie comics community there. Reveling in the creativity of the 1990s Bay Area, he documented aspects of his time there in The K Chronicles, a strip that ran until 2010 and mostly explored, at first, sex, drugs, and music.

“I would do a cartoon about race or racism, and then three about other things,” Knight explained. But that ratio started to reverse after his experience with the San Francisco police. “It was unique and I was not seeing it anywhere. That got me to where I am," he said.

Since then, Knight has been creating comics about police brutality for more than two decades. In 2015, he released They Shoot Black People, Don't They?, a book compilation of 20 years of Knight's police brutality cartoons. He publishes comics about the ongoing Black Lives Matter protests on The Nib, and continues to capture his experiences in his comic strip The Knight Life.

Knight moved to Los Angeles in 2007, andThe K Chronicles was eventually turned into an enormous 500-page comics anthology, The Complete K Chronicles. It's with that hefty book in tow that Knight began to pitch the idea for a TV show based on his comic strips. “When the meeting was wrapping up, I would pull that book out, chuck it up the air and have it slam in the middle of the table," Knight explained to KQED. "This thing was like the size of a phone book — I’d slam it down and then as I was walking out I would say, ‘There’s your first 10 seasons.’" It's a move that impressed Hulu executive Rob Gati, and Woke got the green light in 2016.

Though Woke's release is being heralded as timely, Knight notes that it tends to be white people who say that. Black people, on the other hand, have told him, "What took you so long?"

As Knight explained to Washington Post, “Racism is evergreen.”