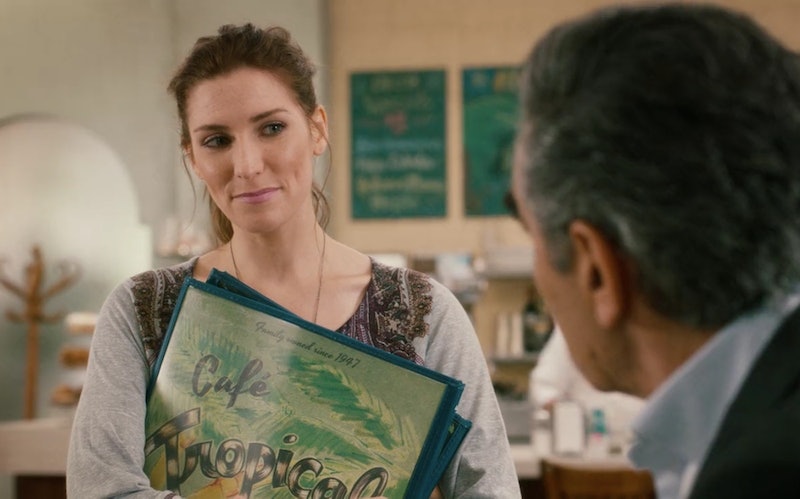 One of Schitt's Creek's most underrated couples is getting a second shot — on a brand new show. According to The Hollywood Reporter, Schitt's Creek alums Tim Rozon and Sarah Levy will star in The Surrealtor, an upcoming SyFy series about a real estate firm that specializes in haunted houses and supernatural occurrences.

The pair, who played fan favorites Mutt and Twyla on the beloved Canadian comedy, are set to begin filming the new series in Newfoundland in mid-September, as Canada begins to restart productions in the wake of the ongoing coronavirus pandemic. Rozon will play Nick Roman, a real estate agent who specializes in in "metaphysically engaged" properties, according to THR, and leads a team of specialists that investigate and eradicate the things that go bump in the night in order to sell properties — all while battling their own demons.

Levy, meanwhile, will play the opposite of her kooky Café Tropical waitress, Twyla, as Susan Ireland, a no-nonsense realtor who doesn't believe in ghosts or hauntings, but is incredibly successful at her job. Both Levy and Rozon celebrated the news on Instagram, where they each pointed out the Schitt's Creek connection. "VERY excited to be reuniting with an oldie (friend) but a goodie," Levy wrote, while Rozon described her as one of "the best costars in the world."

It's unclear whether Nick and Susan will get together on the show — though nothing spells romance like a supernatural believer and a skeptic. Rozon and Levy's characters Mutt and Twyla briefly dated on the first season of Schitt's Creek, though they were eventually broken up by Alexis (Annie Murphy), who moved in on the Schitts' estranged son herself after ending her engagement with Ted (Dustin Milligan). In 2015, Levy pointed out that the reason why Twyla wasn't particularly upset at seeing her good friend begin dating her ex, when she wrote on Twitter that "For the record, Twyla broke up with Mutt," along with the hashtag, "#girlpower."

Despite having dated the same guy, Twyla remained a supportive friend to Alexis throughout all six seasons of the show, while Rozon mostly left Schitt's Creek after Season 2, when he and Alexis decided to break up. He reappeared in the first episode of Season 3, and once more in the Season 4 finale; sadly, fans never got an update on whether or Mutt and Twyla ever reconnected and rekindled their brief romance.

The Surrealtor is the first big project for Levy since Schitt's Creek ended in April 2020. And while she is excited, the actor has noted that it's hard to imagine any other show having the kind of impact on its audience like Schitt's Creek did. "We’ve had such an incredible time together and it’s not lost on me that it’s an experience that I’ll never have again, most likely," Levy told Elite Daily in 2019. That said, if anything has a chance at recreating that kind of impact, it's a haunted take on House Hunters.

More like this
'Bridgerton's Regé-Jean Page Is The World’s Most Handsome Man
By Darshita Goyal
'RHOSLC' Star Jen Shah Refuses To Do A Post-Sentencing Interview With Andy Cohen
By Brad Witter and Jake Viswanath
At 28, Rosie Perez Risked Her Career To Stop Playing Stereotypes
By Gabrielle Bondi
'The Crown' Season 6 Has Suspended Filming "Out Of Respect" For The Queen's Death
By Bustle Staff
Get Even More From Bustle — Sign Up For The Newsletter
From hair trends to relationship advice, our daily newsletter has everything you need to sound like a person who’s on TikTok, even if you aren’t.