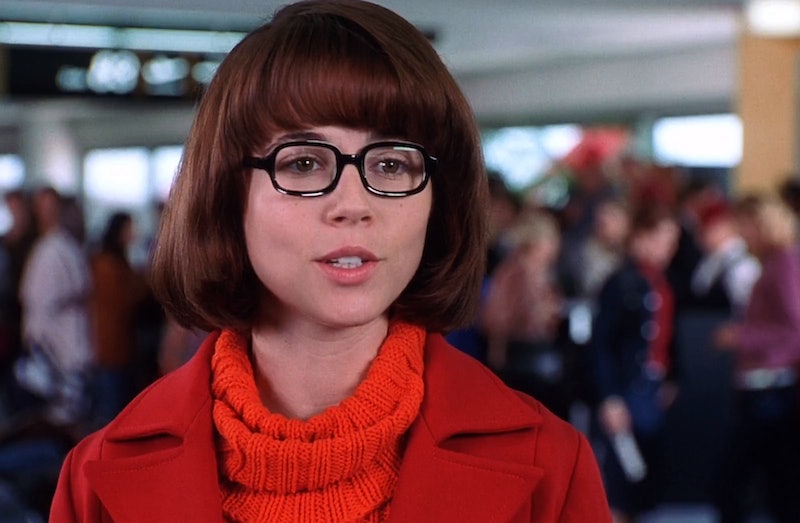 The brilliant, skeptical crime-solving icon that is Velma in Scooby Doo was supposed to be gay in the 2002 live-action movie, revealed the film's screenwriter James Gunn on Twitter. The Guardians of the Galaxy director confirmed the fan theory by sharing that he never meant for the character's sexuality to be ambiguous — he claimed he wrote her as explicitly gay, but ultimately Warner Bros. changed to the script and the film until all suggestion of Velma's sexuality was left on the cutting room floor. The reported cuts also included sexual innuendo between Daphne and Fred, and a kiss between Velma and Daphne, which Gunn previously tweeted about in January.

On Sunday July 12, a fan tweeted to Gunn asking him to write a third Scooby Doo film and make "our live-action lesbian Velma dreams come true." The director responded, "I tried! In 2001 Velma was explicitly gay in my initial script. But the studio just kept watering it down & watering it down, becoming ambiguous (the version shot), then nothing (the released version) & finally having a boyfriend (the sequel)."

Velma, who was played by Linda Cardellini in the films, has long been embraced as a queer icon by fans of the movies and animated series. Gunn isn't the only Scooby Doo creative who has had his intentions to make the character canonically gay derailed by the studio. Tony Cervone, who produced the 2010 animated reboot Scooby Doo: Mystery Incorporated for Cartoon Network, shared his thoughts on the discussion about Velma's sexuality in June.

The producer intervened when fans began arguing about Velma's relationship with Shaggy in the comments of his post featuring the character alongside her intended girlfriend Marcie Fleach against the backdrop of a Pride flag. "I've said this before, but Velma in Mystery Incorporated is not bi. She's gay," he wrote, per Out. "We always planned on Velma acting a little off and out of character while she was dating Shaggy because that relationship was wrong for her and she had unspoken difficulty with the why."

As for Gunn, his intention to write Velma as gay in the live-action movies has been documented since before the film's release. In a 2002 interview with The Seattle Times, Cardellini acknowledged that Velma's sexuality had been in the scripts. "There were a few scenes where Velma comes out of her shell. I wouldn't say she comes out of the closet," Cardellini said. "I thought more along the lines that maybe her sexuality is a little ambiguous." Gunn added that he was "pretty sure she's gay."

To that end, the movie's original script included a scene of both Fred and Velma staring at Daphne's butt as she leaned over the seat in the Mystery Machine (not the most progressive way to discuss Velma's sexuality, but it was 2002), as well as the cut kissing scene, per the newspaper. Despite Velma's sexuality not being overtly expressed in the film, knowing that Gunn and Cervone consider Velma to be a queer character is heartening to fans who hope that in these more progressive times Velma will one day be allowed to fully express her true self on the big screen.

More like this
The 'Scream 6' Trailer Shows Off Hayden Panettiere's Return & Ghostface In NYC
By Jack Irvin and Jake Viswanath
Adam Lambert Called Out The George Michael Biopic Over Potential Casting
By Sam Ramsden
Alicia Silverstone Revives Her 'Clueless' Character In This Super Bowl Commercial
By Jake Viswanath
12 Years Ago, Austin Butler Manifested His Oscar Nom In This Disney Movie Scene
By Jake Viswanath
Get Even More From Bustle — Sign Up For The Newsletter
From hair trends to relationship advice, our daily newsletter has everything you need to sound like a person who’s on TikTok, even if you aren’t.