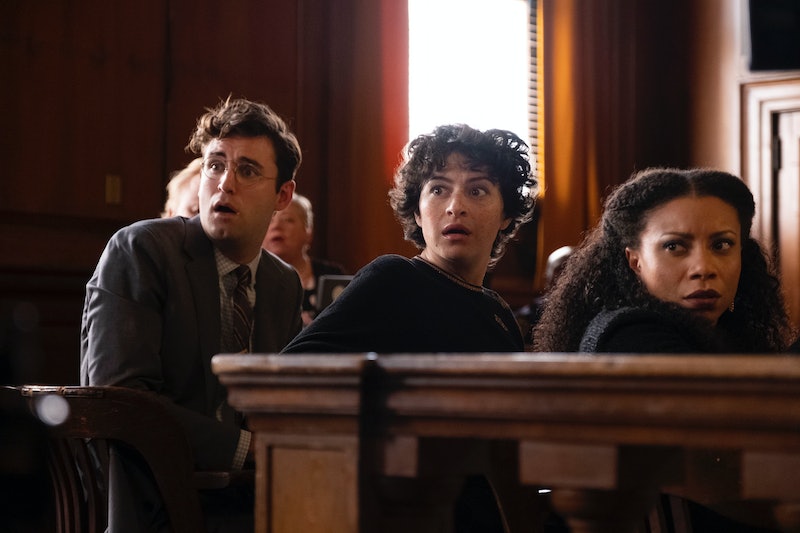 After a three-year hiatus between Seasons 2 and 3, Search Party is back with new episodes mere months after it left — although you could be forgiven for thinking it’s been longer; Season 3’s June premiere was ages ago in this pandemic.

So where did we leave Dory and the gang at the end of last season? This recap of Search Party Season 3 will help you remember what happened to our favorite group of miscreant millennials.

Drew and Dory got (very publicly) booked for murder

Dory starts Season 3 in police custody after police arrest her for Keith’s murder; Drew gets arrested shortly after while trying to outrun the cops. After Dory's fabulous mugshot goes viral, they both become “viral sensations” and the case gains a huge amount of publicity. Suddenly, all four members of the gang — that includes Portia and Elliott — are under a microscope.

While Drew shies away from the spotlight whenever he is able, Dory seems to blossom in it; the public eye is one of the only places she’s able to outrun the ghosts of the people she’s killed. Still, that doesn’t mean she wants to go down for this killing. Together, Drew and Dory pull out all the stops to keep themselves out of prison, doing everything from reaching out to Dory’s estranged parents, to threatening people, and to pretending to be star-crossed lovers even though the romantic aspect of their relationship is long over.

After some consternation (read: briefly attempting to flee the city with Portia, dye his hair, and start a new life somewhere), Elliott comes to the aid of his friends as much as he’s able. Of course, Elliott being Elliott, his time on the stand brings to light another major lie about his life: He does not come from money, but rather was born in the boonies as "Eldad Tupper."

That reveal causes a rift between him and his fiancé Marc, who calls off their wedding after learning the news. Unfortunately, Marc calls it off at the actual wedding, allowing time for a stalker of Dory’s to sneak in and cause mayhem (more on that later). All the attention lands him on the radar of a Tomi Lahren-stand-in, Charlie Reeny (Chloe Fineman), who offers Elliott a job as co-anchor of a political talk show.

Portia feels guilty and gets saved

Without access to a good lawyer after she gives in too early during questioning, Portia agrees to testify against Dory and Drew in exchange for immunity. This makes her feel incredibly guilty, so she turns to a hip group of Christians to repent, and also make a new group of friends.

Ultimately, both the religious awakening and the bad blood between Dory and Portia gets dropped once Dory’s stalker tries to kill Portia at Elliott and Marc’s wedding. The stalker gets hit by a car and ends up in a coma, and Portia joins Elliott in sitting behind Dory and Drew for their final days in court.

Dory and Drew get off … barely

As the trial comes to a close, tempers boil over and Drew fears Dory’s lies built up so far that she can’t even remember they are actually guilty. After the not guilty verdict is read, Drew walks away from Dory, leaving her alone.

Once she’s back in the safety of her home, she finally has a moment of peace … right before her stalker kidnaps her and chains her up in a basement.

Luckily for all of us, Season 4 picks up right where Season 3 ended, meaning we don’t have to wonder about Dory’s fate for too much longer.