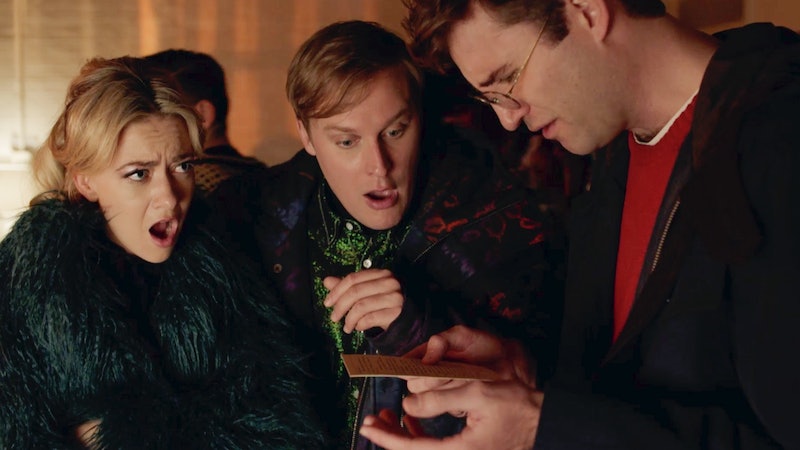 via the Time Warner press site

Season 3 of Search Party ended with an alarming image: Dory (Alia Shawkat) chained up in the basement of her stalker Chip (Cole Escola). That’s exactly where Season 4 picks up, with Chip attempting to convince Dory that not only are they best friends, but it’s actually her other friends who are ruining her life.

Elsewhere, Dory's friends are attempting to move on in their own way, with new work opportunities: Portia (Meredith Hagner) has been cast in the film based on last season’s trial — but because producers thought she’d be too close to the role, she’s not playing Portia; she’s playing Dory. Elliott (John Early) is anchoring a conservative talk show on a Fox News-analogue, while Drew (John Reynolds) is a costumed cast member at a theme park.

And like past seasons, their exploits are aided and hampered by a few key guest stars. Here are all the new guest stars you'll meet on Season 4 of Search Party:

The Handmaid’s Tale’s Ann Dowd pops up as Paula Jo, a townie near Chip’s hideout who's eager to make sure his Christmas decorations are on point. In addition to Handmaid's Tale, Dowd has had prominent roles in The Leftovers, Hereditary, and the 2020 Rebecca remake, among many others.

Dunne, who was recently seen in I Love Dick and This Is Us, pops up as Richard Wreck, the CEO of a pastry company that might just be vital to tracking down Dory’s whereabouts. Although you might recognize Dunne from his recent television turns, Dunne is widely known for his work in An American Werewolf in London and After Hours.

Dory’s predicament isn’t the only way the past is catching up with our quartet. Wilma, a talk show host who has an obsession with Chantal and her story, will also feature into Season 4; Wilma is played by Tony Award-winning actress Lillias White, who’s been in Broadway productions like The Life, Dreamgirls, Cats, and Chicago. Her TV and film credits include projects like Hercules and The Get Down.

Busy Philipps plays Donna DiMarco, the actor playing Portia in the film version of Season 3. She makes a lot of acting choices in her portrayal that Portia is less than thrilled about.

Philipps is no stranger to TV, starring in shows like Dawson's Creek, Freaks and Geeks, Cougar Town, and her own short-lived talk show Busy Tonight.

R.L. Stine as himself

Keep your eyes peeled for a late season cameo from R.L. Stine — yes, that R.L. Stine, the author of the Goosebumps books. All told, his books have sold more than 400 million copies, inspired TV and film adaptations, and made quite a mark on '90s kids.