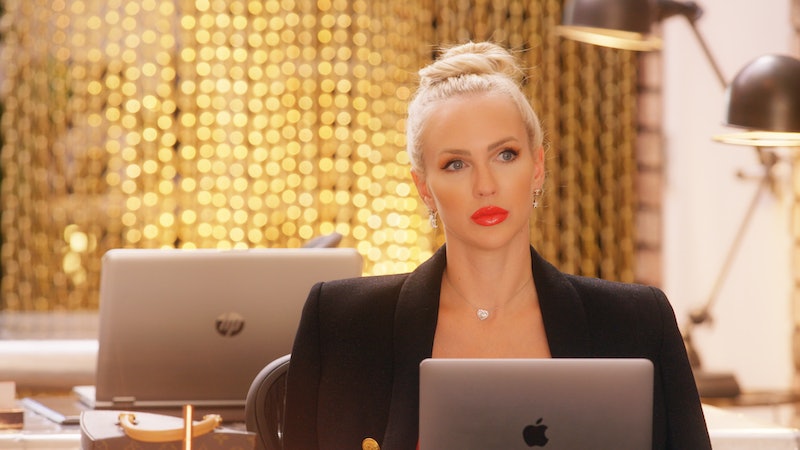 Thanks to her then-fiancé Christian Richard, Christine kicks off Selling Sunset Season 2 with a new ring and a new house. According to Mary, Christine met Christian because he was her client; even though he'd been dating someone else at the time, they "just clicked." But Christine has a different story: she says on the show that she didn't start showing Christian houses — including the $5 million one they now live in together — until about a month and a half after they started dating, and he definitely wasn't with another woman when they got together.

In any case, the two got engaged so quickly that when the season picks up, no one at the Oppenheim Group has even met Christian, a retired software engineer and MIT grad who's "big in the tech world," Christine explains. He pops up occasionally on the show, but otherwise seems to be pretty private; a Google search doesn't yield much more information, and Christine doesn't even post about him on Instagram. But there has been one big development: since filming Season 2, Christine and Christian have tied the knot.

In a January interview with People, Christine explained that she met Christian through a mutual friend, and he proposed on Valentine's Day 2019. They got married on Dec. 15 in a gothic winter wonderland-themed wedding at a downtown Los Angeles cathedral in front of 75 friends and family, including some of her Selling Sunset costars. Never one to follow tradition, she wore a black Galia Lahav couture gown and walked down the aisle to a string quartet playing Ava Max's "Sweet but Psycho."

"We wanted to get married in December to start off the New Year [as husband and wife]," Christine told the magazine. "We're so similar in all the ways that matter. We are both creative, driven, entrepreneurial, and have always lived by our own rules."

She added that they were eager to keep "pushing each other forward into the best versions of ourselves while traveling the world," though for now, they'll have to do so from inside their $5 million home.

More like this
Only 3 Of The One That Got Away Couples Seem To Still Be Together
By Brad Witter
Move Over, 'Sunset'! The Drama-Filled Trailer For 'Selling The OC' Is Here
By Nola Ojomu
What That Ominous 'Selling Sunset' Season 5 Finale Could Mean For Season 6
By Orla Pentelow and Brad Witter
‘RHOBH’ Star Sutton Stracke’s Ex-Husband Helped Her Get Very Rich
By Brad Witter
Get Even More From Bustle — Sign Up For The Newsletter