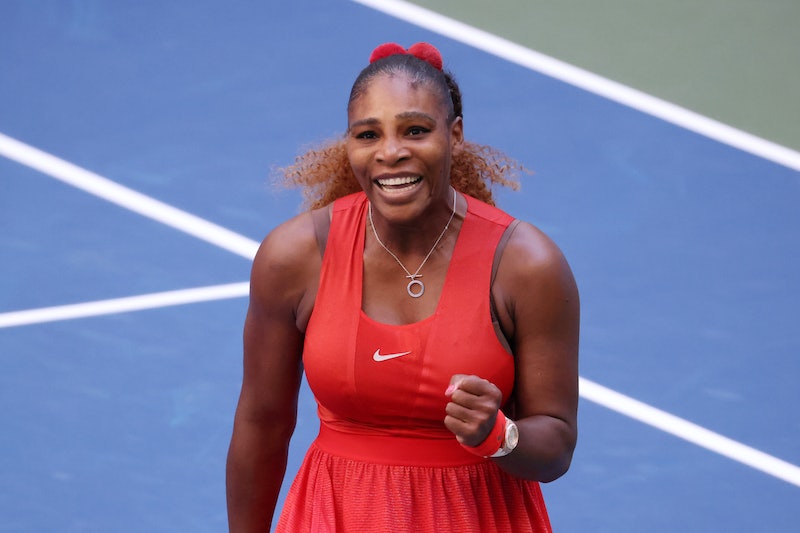 After husband Alexis Ohanian brought little Olympia to the U.S. Open on Saturday, Serena Williams said she hopes her daughter remembers her "fighting" for her latest tennis win, following her victory against Sloane Stephens. While outside fans are not permitted to attend the event, which is taking place at the Billie Jean National Tennis Center in New York City, close family members are permitted inside the venue. As a result, Ohanian and Olympia were seated in the stands during the pivotal match.

The official U.S. Open Twitter account shared an interview with Williams following the match, writing, "Olympia closely watching mom get the win?" When the interviewer asked the tennis legend what she hoped her daughter saw during the match, Williams responded, "Well, I forgot she was coming out, so I hope that she saw her mama fighting." Then she joked that her daughter might have bigger concerns, adding: "I don’t think she was paying attention, between you and me. She may have been playing with some princesses upstairs."

Williams' daughter might not always be the most attentive audience member, but she was definitely rooting for her mom this weekend. On Saturday, Ohanian posted an adorable video with Olympia on Instagram, capturing the moment the tennis star realized her family was watching the match. Olympia pointed out at the court and mouthed "Mama!" after Williams waved at the two in the bleachers.

Williams' win against Stephens represented a comeback victory for the tennis star, who will move on to compete against Maria Sakkari in the fourth round of the U.S. Open on Monday, as per The New York Times. If Williams wins, she'll take home her 24th Grand Slam title and achieve a historic tie with Margaret Court, who holds the record for the most titles. The final match and record-breaking moment could be an uphill battle, as in 2018 and 2019, Williams made it to the final match, but then lost to Naomi Osaka and Bianca Andreescu.

It's not yet clear if Ohanian and Olympia will both be in the stands to support the tennis star on Monday, but the two have thus far been her biggest cheerleaders. Ohanian, who wore a mask reading, "Girl Dad" over the weekend, posted another sweet video of Olympia at the match on Instagram, writing, "Happy feet!" Last month, the pair masked up for the Top Seed Open in Kentucky, writing on Instagram, "Mama back at work in Kentucky." While Olympia might not be laser focused on the match, the little clearly always makes time to give her mom a mid-game boost when she needs one.

More like this
The 2023 Super Bowl Commercials Feature A 'Breaking Bad' Reunion & Missy Elliott
By Alyssa Lapid
'Love Island' Has Added Yet Another Bombshell To The Villa
By Bustle UK
Who Is Allison Williams Dating After Her Divorce? She’s Engaged With A Child
By Jake Viswanath
Blake Lively Is Trolling Ryan Reynolds Again – Over Wrexham FC
By Sam Ramsden
Get Even More From Bustle — Sign Up For The Newsletter
From hair trends to relationship advice, our daily newsletter has everything you need to sound like a person who’s on TikTok, even if you aren’t.