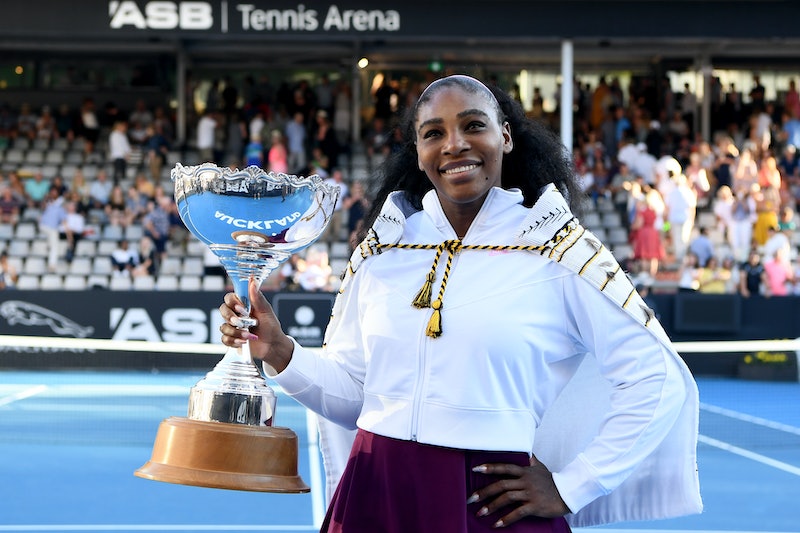 Record-breaking tennis player Serena Williams won her first title since the birth of her daughter at the ASB Classic in Auckland, New Zealand on Sunday. She defeated fellow American Jessica Pegula in the women’s single with a 6-3, 6-4 win. Williams, whose last win came three years ago while pregnant at the Australian Open in January 2017, will donate her $43,000 prize to Australian wildfire relief. On the court to collect her trophy, Williams was joined by daughter Alexis Olympia Ohanian, Jr., whom she welcomed in September 2017 with husband Alexis Ohanian.

Williams said after the match, as per CNN, "It feels good. It's been a long time. I think you can see the relief on my face... I played an incredible opponent today in Jessica, and honestly, it was a great match, and I couldn't have played anyone better in the final."

Williams' win comes after a contentious return to the courts in March 2018, six months after the birth of her daughter. In a CNN op-ed published in 2018, Williams revealed she almost died during childbirth and highlighted the racial disparities that exist in health care. She wrote, “Every mother, everywhere, regardless of race or background deserves to have a healthy pregnancy and birth.”

Since her return, Williams has made it to various final tournament rounds but failed to take home any of the wins. She said of her overdue win on Sunday, "You have to be your biggest cheerleader, especially if you're feeling you're not doing everything right — or even if you are doing everything right but things aren't working out for you.”

Sunday’s game comes a week before the Australian Open, set to begin on Jan. 19. Prior to the tournament, however, Williams will join tennis all-stars Roger Federer and Rafael Nadal for the charity match Australian Open Rally for Relief to raise funds for the catastrophic fires blazing across Australia. Set to take place a few days prior to the open on Jan. 15, ticket proceeds will be donated to fire relief organizations.

“This unprecedented bushfire crisis is devastating people, properties, communities, livestock and animals across the country and our hearts go out to all those affected," Craig Tiley, director of the Australian Open, said in a statement, per the New York Times. “We felt it was vital we use all our events across the summer to make a meaningful contribution to help these people and communities rebuild their lives.”

At the tournament next week, Williams — a record-breaking 23-time Grand Slam winner — will compete for her 24th Grand Slam.

More like this
'Breaking Bad' Duo Walt & Jesse Are Back — In This Super Bowl Commercial
By Jake Viswanath
15 Photos Of 'The Last Of Us' Star Pedro Pascal That Cement His Zaddy Status
By Radhika Menon
Who Is Pete Davidson Dating? He & Chase Sui Wonders Got Caught Kissing
By Jake Viswanath
'Bachelorette' Vet Clare Crawley Unveiled 2 Special Wedding Day Accessories
By Stephanie Topacio Long
Get Even More From Bustle — Sign Up For The Newsletter
From hair trends to relationship advice, our daily newsletter has everything you need to sound like a person who’s on TikTok, even if you aren’t.