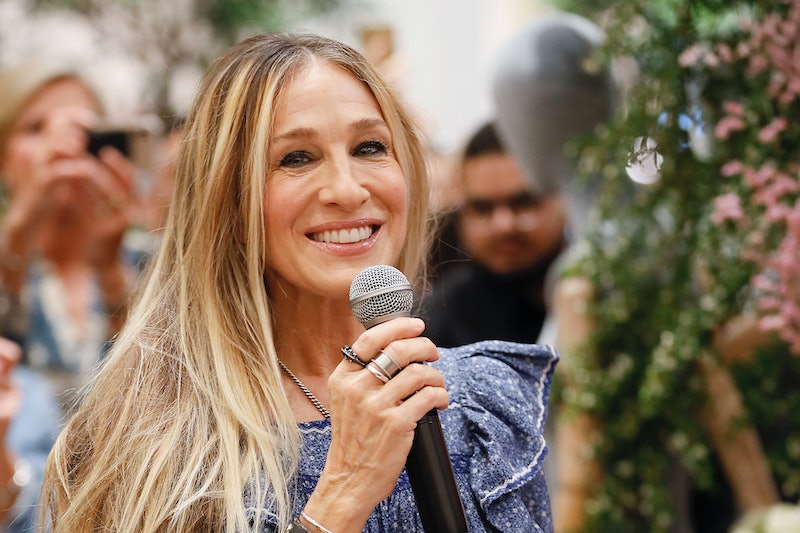 While eagerly waiting for the first scripts, Sarah Jessica Parker discussed storylines for Just Like That, HBO Max's upcoming Sex and the City revival, with Vanity Fair, and she couldn't help but wonder what Carrie Bradshaw will be up to. Although the actor still doesn't know plot specifics for the limited series' 10 half-hour episodes — which will follow best friends Carrie (Parker), Miranda Hobbes (Cynthia Nixon), and Charlotte York (Kristin Davis) as they navigate their 50s in New York City — she has some ideas about what the writers should tackle. One of those topics is the COVID-19 pandemic's impact on the trio.

The pandemic will "obviously be part of the storyline, because that’s the city [these characters] live in," Parker told VF. "And how has that changed relationships once friends disappear? I have great faith that the writers are going to examine it all."

We already know that Kim Cattrall's Samantha Jones will not be in the revival, but where the storylines will go beyond COVID is anyone's guess — including Parker, who added she's "so curious and excited to see how the writers imagine these women today." She also went on to imagine everything from the women's relationship to social media, wondering if Carrie has written more books or perhaps even has a podcast. She also noted that both Miranda and Charlotte are now mothers of teenagers.

Of course, Parker's hypotheticals didn't stop there. Also among her laundry list of questions: "Where have they fallen short as women, as friends, and how are they finding their way? Did they move with momentum? Are they like some people who are confused, threatened, nervous [by what’s happening in the world]?"

The story will bring in some new actors, but none to step into Kim Cattrall's role. Parker previously shut down speculation that Samantha would be replaced in Just Like That. (Jennifer Coolidge was one name floated by fans, but the Legally Blonde actor later said on Watch What Happens Live with Andy Cohen that she doesn't "see anyone being able to replace" the star.) "We're not looking to create a fourth character," Parker told TMZ on Jan. 12. "We have New York City as the fourth character. There will be lots of interesting, new characters we are super excited about."

Regardless of who may be part of the revival and where the plot may lead, Parker says the "incredibly diverse" all-women writers room (save for showrunner Michael Patrick King) will infuse the series with new "life experience, political world views, and social world views."