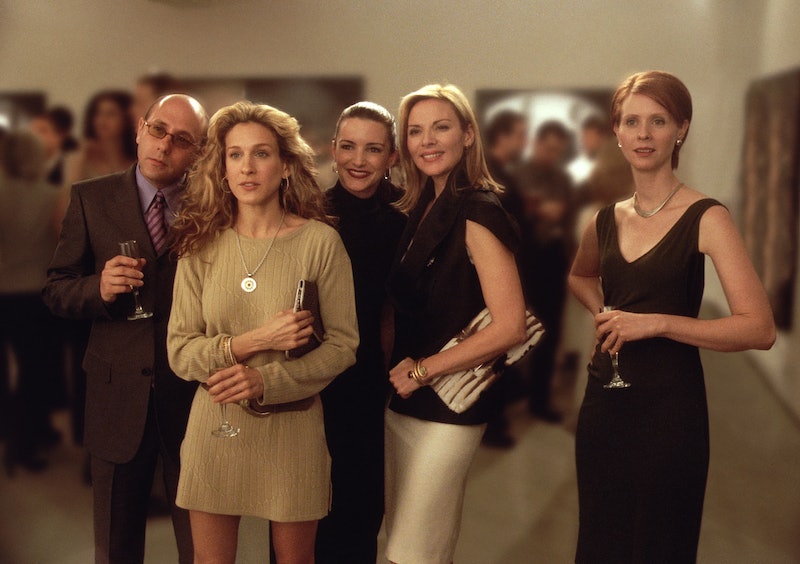 Samantha Jones and her iconic sex positivity will not be featured on HBO Max's upcoming Sex and the City reboot, And Just Like That..., after Kim Cattrall declined to return to the role. However, her presence will be felt in spirit both on and off-screen. In a new interview, an HBO Max executive hinted that Samantha's absence from the Sex and the City reboot will mirror the cast's friendships (or lack thereof) in real life.

Speaking to TVLine on Feb. 10, HBO Max content chief Casey Bloys said that the intention of the new series was not to have Carrie, Miranda, and Charlotte revisit the adventures of their 30s, as in the original show. "It is very much a story about women in their 50s, and they are dealing with things that people deal with in their 50s," he explained. For these girls, part of that growth includes evolving relationships with once-close friends.

"Just as in real life, people come into your life, people leave," he said, without mentioning Cattrall by name. "Friendships fade, and new friendships start. So I think it is all very indicative of the real stages, the actual stages of life. They're trying to tell an honest story about being a woman in her 50s in New York. So it should all feel somewhat organic, and the friends that you have when you're 30, you may not have when you're 50."

As fans will remember, Cattrall has repeatedly declined to participate in anything SATC-related, including the new series and a planned third film in 2017, citing her fraught relationships with former castmates Sarah Jessica Parker, Cynthia Nixon, and Kristin Davis and backlash she's received for refusing to reprise Samantha as reasons. "It’s quite extraordinary to get any kind of negative press about something that I’ve been saying for almost a year of 'no,'" she told Piers Morgan in a 2017 interview. "And this is really where I take to task the people from Sex and the City, and specifically Sarah Jessica Parker, in that I think she could have been nicer."

However, the feelings are not reciprocated by her castmates. After And Just Like That... was announced, Parker dismissed rumors of a feud between her and Cattrall in her Instagram comments and said that she would be missed on set. "Samantha isn't part of this story," she wrote. "But she will always be part of us. No matter where we are or what we do."

More like this
A New 'And Just Like That' Table Read Pic Confirms A Key Character's Return
By Jack Irvin and Grace Wehniainen
24 Years Ago, 'Friends' Dropped Its Most Underrated Ross & Rachel Episode
By Grace Wehniainen
Netflix Reveals First Look At Wednesday In The 'Addams Family' Spinoff Series
By Bustle Editors
Lindsay Lohan & Jonathan Bennett Celebrated Mean Girls Day Very Differently
By Jake Viswanath
Get Even More From Bustle — Sign Up For The Newsletter