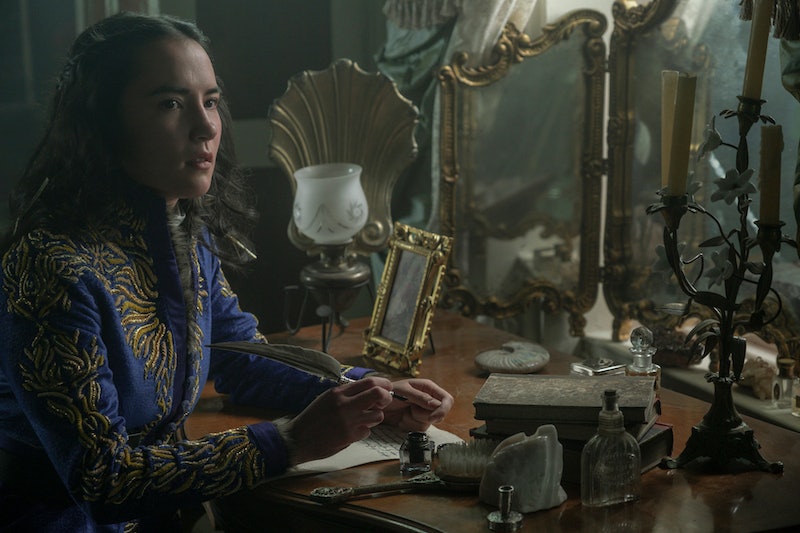 Ravka is a country divided. Four hundred years ago, the Black Heretic opened the Shadow Fold: a wide scar, full of nothing but monsters and darkness, that stretches from one side of Ravka to the other. With the Ravkan capital separated from its major port and trade cities — and Ravkans unable to go around it, due to poor relations with their neighboring nations — the Fold leaves Ravka with no choice but to build strong armies to defend itself from hostile forces and escort goods and people across the darkness.

Enter Alina: a 17-year-old orphan from a border village, now working as a cartographer in Ravka’s First Army (non-magical folk serve in the First Army, while Grisha make up the Second Army forces). When the fearsome creatures known as the volcra attack her team on their first trip through the Shadow Fold, Alina explodes with a burst of light, saving her only childhood friend, a fellow orphan named Mal, from certain death.

Book One: Shadow and Bone

Word of Alina’s latent Grisha powers travels fast. Most Grisha — Ravka’s word for magic users — are identified as such in early childhood, and none of them have exhibited the powers that she’s just put on display. Separated from Mal for the first time in years, she’s brought before the Darkling, the leader of the Second Army, and labeled a Sun Summoner: a never-before-seen kind of Grisha. Her ability to control the light means that Ravka might have a hope of destroying the Shadow Fold forever, making her a valuable asset.

She immediately moves into the Little Palace — the home of Grisha-in-training — and begins honing her abilities under the supervision of her mentor, Baghra. When Alina displays difficulty using her Sun Summoner powers unless she’s around an amplifier, the Darkling — who is both a Shadow Summoner and a living amplifier — orders a team of First Army trackers to hunt down an ancient and powerful creature, Morozova’s Stag, whose antlers can be used to enhance Grisha powers.

Mal is among the trackers who set out to hunt the stag, and he’s the sole survivor of an attack from enemy forces. When he returns to Os Alta to report the team’s findings to the Darkling, he’s overcome with jealousy upon seeing Alina perform with the other man for the entertainment of the Ravkan court. He confronts her and leaves Os Alta angry and hurt.

Alina doesn’t have long to stew on their argument, however. Baghra pulls her aside that night and orders her to leave Ravka. Alina’s mentor reveals that she is the Darkling’s mother, and tells the girl that her son will use the stag’s antlers to make an amplifier... one that will allow him to control her. The Darkling is actually the Black Heretic, the one who created the Fold hundreds of years ago, and he has no intention of destroying it. He plans to expand it and use it to take over Ravka, but he needs Alina to first kill the volcra so that he will be safe within its bounds.

Alina flees Os Alta and goes in search of the stag by herself. She’s soon joined by Mal, who began tracking her the moment he learned she was missing. Their feelings for one another come to the fore, and they soon manage to locate the stag... just in time to lead the Darkling straight to it.

Kidnapped and hauled back to the Shadow Fold, Alina and Mal find themselves in mortal peril. The Darkling has fitted Alina with Morozova’s Collar — the amplifier made from the stag’s antlers — and he’s finally ready to take over the Shadow Fold. When he orders Mal’s execution, however, Alina breaks free from his control and uses the amplifier for herself. She attacks their vessel twice with the Cut — the Darkling’s signature Grisha attack — and rescues Mal.

They flee the Shadow Fold and board a ship to cross the sea, leaving the Darkling to be eaten by the volcra in the darkness.

Siege and Storm picks up where Shadow and Bone leaves off. Alina and Mal are living undercover in Novyi Zem, but the Darkling is hot on their trail. Not only did the Shadow Summoner survive his time in the Shadow Fold, but he also emerged with a new ability: the power to create even more fearsome creatures, the nichevo’ya, using merzost — dark magic that greatly taxes its wielder.

The Darkling kidnaps Alina and Mal again and takes them aboard a ship captained by the privateer Sturmhond. The Shadow Summoner wants to make another amplifier, the Sea Whip’s Fetter, but he needs scales from another of Ravka’s mythical creatures to do so. This time, his target is Rusalye: a sea serpent who hunts young women and drags them to their deaths in the icy water. He tasks Mal with tracking the monster down, and imprisons Alina, who narrowly avoids being tortured when Sturmhond intervenes on her behalf.

Mal finds Rusalye and the Darkling launches his planned attack, just as the vessel meets another ship. Having been paid much more handsomely by someone else in Ravka, Sturmhond mutinies, leaving the Darkling aboard the ship to die, yet again. The pirate and his crew, including Mal and Alina, make off with Rusalye’s scales on their new vessel.

Aboard the new ship, which is crewed by Grisha, Mal and Alina befriend the twin Heartrenders, Tolya and Tamar, and Sturmhond has one of the Fabrikators on board shape the sea monster’s scales into the Sea Whip’s Fetter. The Sun Summoner now has two legendary amplifiers in her possession, and she soon learns of the existence of a third: a phoenix-like creature known as the Firebird. She and Mal return to Ravka with Sturmhond, who turns out to be a much more important figure than he seems at first blush.

As it turns out, the privateer is actually Nikolai Lantsov, the younger son of Alexander III, King of Ravka. He’s planning to return to Os Alta and ask his older brother, Vasily, to abdicate and allow him to become their father’s heir. What’s more, Nikolai wants to marry Alina and put her in charge of the Second Army, a plan both she and Mal oppose. Instead, Alina suggests that she lead the Second Army, garnering support for Nikolai’s coronation among the Grisha, and he agrees.

Despite some early resistance from the Grisha, Alina settles quickly into her new position over the Second Army and takes Mal, Tolya, and Tamar as her personal guards. She’s also reckoning with her new identity as a saint with a cult following, which she only discovered upon her return to Ravka. In the capital, Alina learns that the Apparat, a priest in the Little Palace, has helped to build belief in her among the people.

The transition back to life in Os Alta is not as easy for Nikolai, whose plan to civilly unseat his brother is met with resistance. Sensing a threat to his future reign, Vasily takes a new interest in politics, and begins arranging a trade deal with one of his country’s enemies — a decision that has devastating consequences.

The Darkling returns to Ravka through the newly opened border. He storms Os Alta, just as Nikolai learns of his brother’s folly, and kills Vasily with the nichevo’ya. The surviving prince gets his parents to an escape vessel and attempts to rescue the Sun Summoner as well. Alina will not abandon the Second Army, however, and insists that Nikolai take Baghra — who was blinded by the Darkling for helping the Sun Summoner — with them instead.

In a last-ditch effort to save Ravka, Alina goes toe-to-toe with the Darkling. She uses merzost to defeat him, draining her own health and turning her hair white in the process. The dark magic does not kill the Darkling, but it does buy Alina and the other Grisha time to escape Os Alta before the nichevo’ya kill them all.

As Ruin and Rising opens, Alina, Mal, the Apparat, and what remains of the Second Army are living in hiding underground, while the Darkling controls Ravka. Although their new home is safe for most of the Grisha, Alina suffers from the lack of sunlight, and she still wishes to find the Firebird and complete her set of amplifiers.

Mal and the others escort her to safety, where they meet up with Nikolai once more. Together, they travel to a mountaintop hideaway where Baghra, Nikolai’s parents, and other survivors of the Os Alta siege are waiting for them.

Alina and Nikolai hatch a plan to win Ravka back from the Darkling, but he’s one step ahead of them again. He invades their new home and attacks Nikolai, turning him into a nichevo’ya-like creature with a taste for blood. Like the nichevo’ya, Nikolai’s new form is unaffected by Alina’s Sun Summoner powers. Realizing that his friend cannot save him, the prince flies to the Shadow Fold to live among the volcra.

Baghra sacrifices herself to create a diversion, giving Mal and Alina time to escape. With nowhere else to go, the teens set out in search of the Firebird. They locate it using Mal’s tracker skills, but a strange encounter reveals that Mal, not the bird itself, is the actual amplifier. Not only that, but, as a descendant of Baghra’s sister, he’s related to the Darkling. Alina would need to kill Mal to access the full power she could gain from the Firebird amplifier, but she refuses to do so.

Alina gathers a small contingent of soldiers, the Soldat Sol, and marches off to the Fold for her final showdown against Darkling. Nikolai flies in with a flock of volcra under his command, which he uses to attack the Shadow Summoner. Mal convinces Alina to kill him, at which point she comes into her full powers as Sun Summoner. Ascended in this way, she bestows her powers upon every non-Grisha in the vicinity, but loses all of her Grisha abilities in the process. The sudden realization that Alina isn’t a Sun Summoner stuns the Darkling, and Alina seizes upon the chance to kill him — using the same blade that ended Mal’s life.

Since Alina is no longer a Grisha, it’s up to the new Sun Summoners to put an end to the Shadow Fold. Nikolai turns back into a human, and Tolya and Tamar manage to revive Mal, rebirthing the Firebird into his new life, one he will spend with Alina by his side.

At Alina’s insistence, her Tailor friend, Genya, makes another corpse look like hers, and burns it on the funerary pyre with a number of other bodies, including the Darkling’s. With most of Ravka believing that their beloved Sankta Alina is dead, the former Sun Summoner assumes a new identity. She marries Mal, and together they reopen the orphanage that was their childhood home.