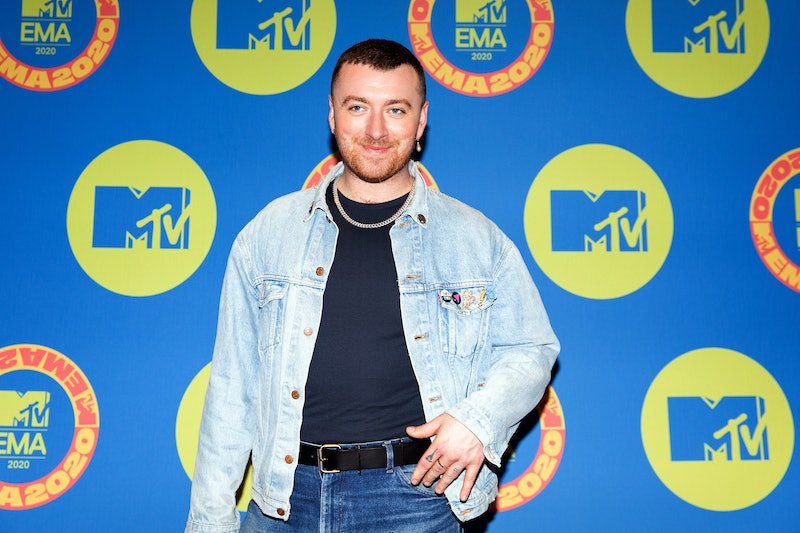 After using the wrong pronouns for his fellow musician, Shawn Mendes publicly apologized to Sam Smith for misgendering them during an introduction at the iHeartRadio Jingle Ball 2020 on Thursday, Dec. 10. Mendes — and fans keeping an eye on the situation — didn't have to wait long for a response. Smith graciously accepted the "Wonder" singer's apology via their Instagram story on Friday, Dec. 11.

Mendes erred while introducing Smith's performance at Jingle Ball, accidentally referring to the singer — who identifies as "nonbinary/genderqueer" and uses "them/them" pronouns — as "he," rather than "they." However, once fans pointed out Mendes' mistake on social media, he addressed it on his Instagram story and promised that he wouldn't do it again in the future. "Oh @samsmith I'm so sorry for refferring [sic] to you as a ‘he' for your jingle ball introduction," Mendes wrote. "It absolutely slipped my mind. Wont happen again." He concluded his post by "sending [Smith] so much love" and praising Smith as "one of the funniest people I've ever met."

While it's unclear whether it was Mendes himself who misgendered Smith or whether it was an issue with the script he was reading as part of the introduction, he accepted responsibility. And Smith responded positively to the message. "We're all learning together," they wrote on their own Instagram Story, along with two heart emojis. "Happy holidays, all my love xx."

Smith has long been open about their gender identity and the process of publicly coming to terms with how they identify. "I am not male or female. I think I float somewhere in between," Smith told Jameela Jamil in March 2019 as part of her iWeigh series. "I've always been very free in terms of thinking about sexuality, so I’ve just tried to change that into my thoughts on gender as well. ... When I saw the word non-binary, genderqueer, and I read into it, and I heard these people speaking, I was like, "F*ck, that is me.'"

A few months later, Smith told GQ that the process of discovering their identity was a long one, but that it allowed them to finally feel free and comfortable with who they are. "Ever since I was a little boy, ever since I was a little human, I didn't feel comfortable being a man really. I never really did," Smith revealed. "Some days I've got my manly side and some days I've got my womanly side, but it's when I'm in the middle of that switch that I get really, really depressed and sad. Because I don't know who I am or where I am or what I'm doing and I feel very misunderstood by myself. I realized that's because I don't fit into either."

Smith told GQ at the time that they were still using "he/him" pronouns as they got more comfortable with finding the right way to identify themselves, and then in September 2019, the singer announced on Twitter that they were officially changing their pronouns. "Today is a good day so here goes. I've decided I am changing my pronouns to THEY/THEM," Smith wrote. "After a lifetime of being at war with my gender I’ve decided to embrace myself for who I am, inside and out..."

"I’m so excited and privileged to be surrounded by people that support me in this decision but I’ve been very nervous about announcing this because I care too much about what people think but f*ck it!" they continued. In addition to promoting several "activists and leaders of the non binary/trans community that have helped me," Smith noted that they were finally in a place where they felt free to be themselves.

"I am at no stage just yet to eloquently speak at length about what it means to be non binary but I can’t wait for the day that I am. So for now I just want to be VISIBLE and open," they wrote, later adding, "I’m scared sh*tless, but feeling super free right now."

Thanks to Smith's visibility and openness, Mendes and likely many others had a learning moment.

More like this
Stormzy Made A Passionate Speech About The Importance Of Diversity
By El Hunt
Pro Footballer Zander Murray Is "Blown Away" By Support After Coming Out
By Sam Ramsden
Everything To Know About Taylor Swift’s 10th Studio Album, 'Midnights'
By Grace Wehniainen and Jake Viswanath
Beyoncé’s Special Tribute To Sister Solange Was Both Touching & Hilarious
By Stephanie Topacio Long
Get Even More From Bustle — Sign Up For The Newsletter