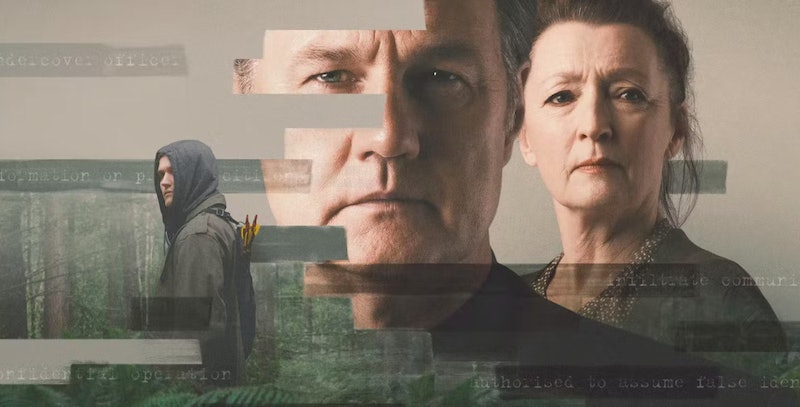 Based on true events, BBC’s Sherwood revisits a 2004 double-murder case that occurred in the Nottinghamshire village of Annesley Woodhouse and rocked an already-fractured local community. As the drama wraps up its critically-acclaimed Season 1, fans have naturally begun to wonder about the show’s return. In a press release to Bustle, the BBC confirmed that Sherwood will return for a second series. Keep scrolling for everything we know about Sherwood Season 2 so far.

Penned by award-winning playwright and dramatist, James Graham, Sherwood season two will again take inspiration from the Nottinghamshire mining village in which Graham grew up. Although exact plot details for the show’s second outing are yet to be revealed, an early synopsis confirms that season two will again examine “the lives and legacy of those governed by Britain’s industrial past” with stories from the communities of “red wall” towns.

Sherwood series two will also explore the “controversial deployment of so-called ‘spycops’” and how “seismic ripples from the past can come back to haunt the present.” As mentioned, the show’s first series was based on the real-life murders of ex-miner Keith Frogson and Chanel Taylor, who were slain in village of Annesley Woodhouse back in 2004.

Casting details for season two are yet to be announced by the BBC. The cast of Season 1 was led by David Morrissey as Detective Chief Superintendent Ian St Clair, Lesley Manville as Julie Jackson, and Robert Glenister as Detective Inspector Kevin Salisbury. Meanwhile, Joanne Froggatt, Alun Armstrong, Kevin Doyle, Claire Rushbrook, Adam Hugill, and Alun Armstrong, among others, also starred in the hit drama.

Speaking ahead of the next series, the show’s writer Graham praised the drama’s “incredible cast,” revealing that he “can’t wait to show audiences more.”

“I’ve been so deeply moved by the response to Sherwood. These stories come from my home, and I want to specifically express gratitude to my community for whom I know these subjects can be difficult but, I hope, important ones to explore,” he added.

Elsewhere, the Acting Director of BBC Drama, Ben Irving, said in a statement, “We are thrilled that James Graham and the team at House have agreed to return to the world of Sherwood a second time. This series has been met with an incredible reaction from audiences on the BBC thanks to the amazing work of all involved.”

Filming is scheduled to begin in 2023. However, an exact release date for season two is yet to confirmed.

More like this
Fans Of 'Scenes From A Marriage' Will Be So Into The BBC’s New Drama
By Bustle UK
'The Timewasters' Creator Is Back With A New Boarding School Dramedy
By Darshita Goyal
The Bestselling Novel 'The Doll Factory' Will Be Adapted Into Thrilling TV Series
By Catharina Cheung
WAGatha Christie The Series Is Officially... Coming To TV
By Maxine Harrison
Get The Very Best Of Bustle/UK