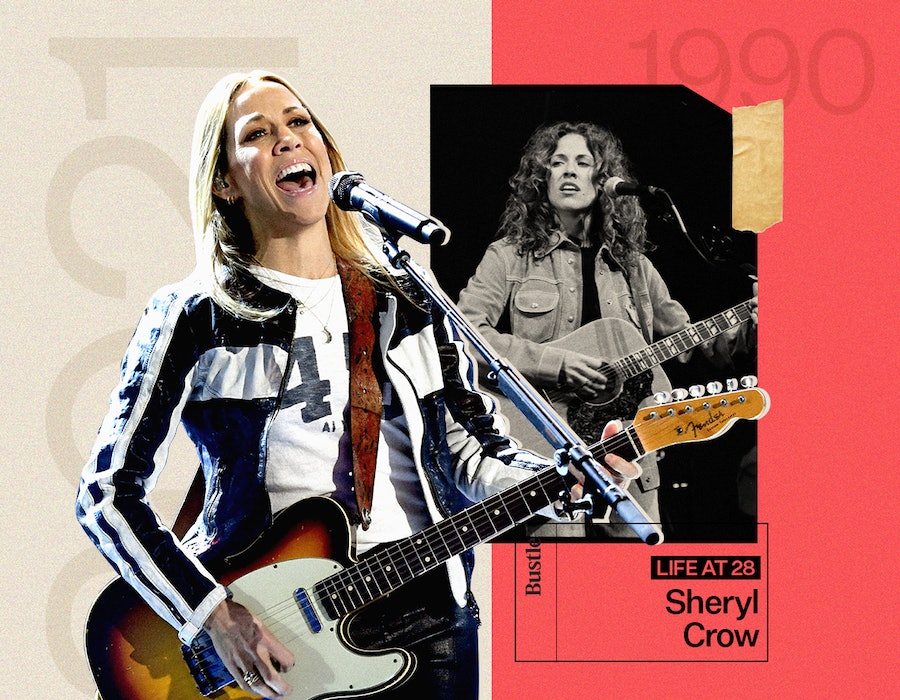 In Bustle’s Q&A series 28, successful women describe exactly what their lives looked like when they were 28 — what they wore, where they worked, what stressed them out most, and what, if anything, they would do differently. This time, Sheryl Crow reflects on the time she spent trying to hit it big.

In 1990, a 28-year-old Sheryl Crow was still four years away from her breakout hit, “All I Wanna Do.” But she enjoyed being, as she puts it, “young and poor in LA”: spending her days waiting tables and her nights working on music, when she wasn’t out on the town. “We’d go to the China Club and I would jump up on stage,” she tells Bustle. “Or we would go places where people hung out, [like] The Cat and the Fiddle, and hang out with Robert Plant.”

Crow had already written songs for Tina Turner and Celine Dion, and toured as a backup singer for Michael Jackson and The Eagles’ Don Henley, but was still struggling to break through. She says the sexual harassment she endured from Jackson’s manager, Frank DiLeo, lead to a “rude awakening” about the realities of the music industry. A bout of depression followed.

It was Henley who set her on the right track. She remembers his advice: “Stay home, write, and get a publishing deal ... You got good songs, now you need to sing them, and you need to get people to hear you sing them.” Nine Grammys, 11 studio albums, and 50 million album sales later, it’s safe to say her hard work paid off. These days, she’s still jumping up onstage to sing at a moment’s notice — but now she performs alongside her longtime heroes, like Stevie Nicks and Emmylou Harris.

That’s just what her new live album, Sheryl Crow Live From the Ryman and More, gave her a chance to do. It was magical “to be able to play with Stevie Nicks, who was my champion as a young artist, my role model as a kid from 9 years old on.” Crow says. “And then these young artists who've meant so much to me as well: Brandi and Jason Isbell.”

Below, Crow discusses why being 28 was really like being 20, her big ’90s hair, and the state of the music industry today.

Take me back to 1990, when you were 28. How were you feeling about your life and career?

I was in between tours. I got off of the Michael Jackson tour in 1989 and then I went on the road with Don Henley as a backup singer, so I had just gotten home and was waiting tables in Los Angeles at a place called Le Cafe. I put together a band and was doing showcases at age 28, trying to get my own music heard, playing in different clubs, and trying to get a record deal. It was a very humbling time, needless to say, of wondering whether I was gonna wind up moving home and becoming a schoolteacher again or if somebody would actually, ultimately, sign me to a record deal.

What were you wearing?

As I recall, I was still wearing a lot of vintage. What was happening with girls during that time in the pop scene was obviously Madonna, wearing lingerie on the outside and ripped-up mesh stockings, and Lisa Lisa and Cult Jam, [wearing] short skirts, and Paula Abdul. I was still wearing jeans and vintage leather, suede Western-looking jackets, and I had very long curly hair. I remember distinctly a record A&R guy saying, “We don't know what to do with a blue-eyed soul-country singer.” I think part of that probably was because of my clothes. At the time they were probably like, “Who is this person?”

I saw that 1987 headshot you posted on Instagram. A lot of big hair!

Yeah! It was a commitment, but that was the look.

Pre-1994, when you had your first big hit, how were you feeling about the music industry?

I didn’t really have much knowledge about how it all worked, with the exception of having been on the Jackson tour, and having had an unpleasant situation with Michael’s manager. It was then that I learned that the record industry wasn't all about great songs and talent and hard work, that there were other elements that could definitely sway how and how many times you got played. It was kind of a rude awakening and for somebody who was from a small town in Missouri, with parents who were like, “Look, you gotta work hard, be a good person.” It burst my bubble. A lot. So when I came home from that experience and put together a band and put my nose to the grindstone, I just tried to hope for the best and stick with it.

Lately we’ve been reevaluating how famous women, particularly in the music industry, were treated in the ’90s. From your perspective, what was the industry like at that time?

The music industry was, and I think even still is to a certain extent, very male-centric. The heads of record labels were all male, with the exception of maybe one woman who was at the top of a record label. But for the most part, the agents were men, the music program was for men, the promoters were men — and we've not come that far. But because it was structured that way, they had say into what you would sound like and what you would look like, and where you would appear. It was — and still is — very frustrating for me. My perception of art was based on credibility, and at that time in particular it started to become all about image.

Now, of course, image is even more glorified. But back then, it seemed like the very thing you didn’t want to do was undermine your art by trying to be sexy and trying to look like a supermodel.

I will say the other thing that was frustrating as well was that it seemed like every woman was put with a male producer. There was only one female producer that I knew of, Susan Rogers, who Prince was forward-thinking enough and confident enough to allow to produce him. There weren’t women producing themselves. It was a lot of mountain-climbing.

Did you find ways of getting fulfillment outside your art?

I pretty much was concentrating on the one thing: getting my music heard. Now, that being said, I had a lot of fun doing that. When I think about some of the stuff that I did — like crashing a party at Tropicana [where] Sting was having a listening party, and giving my tape to his producer — I did some pretty ballsy maneuvering. I met a lot of people. I used to show up at this place called the China Club, and I would sit in with the band, made up of great players like Steve Lukather and Steve Entwistle from The Who. And I would sing covers just to get myself heard and known. I guess when you're young —and 28 doesn't sound that young but for somebody who came from a really small town and led a pretty sheltered life, I would say 28 was probably about 20 in my emotional development — I just was ballsy, man. I would go up and talk to anybody that was well-known.

What are you most proud of from that time?

As many times as I was told, “We don't know what to do with you,” or “We'll give you money to develop you but we're not ready to give you a deal,” as many times as I was told “No,” that was even more fuel to keep me going. I'm proud of the fact that I was raised by people, [for whom] Puritan work ethic was so paramount and that the hard work was the thing that I really enjoyed. I enjoyed getting better, I enjoyed working on my craft. And I did it ad nauseam. I would come from waiting tables, and I would get on my 4-track [recorder], and I would practice and write until 3 in the morning. It was crazy.

I would probably tell myself to not be so hard on myself. And that is a lesson that took me 20 years to learn. By [my late 40s] I had breast cancer, I'd been in this business for a long time. And it wasn't really until then that I figured out that the voices that exist in my head, that tell me I'm not good enough, are based on myth. I think I would have just told myself, “Have more fun. And take it a little less seriously.”