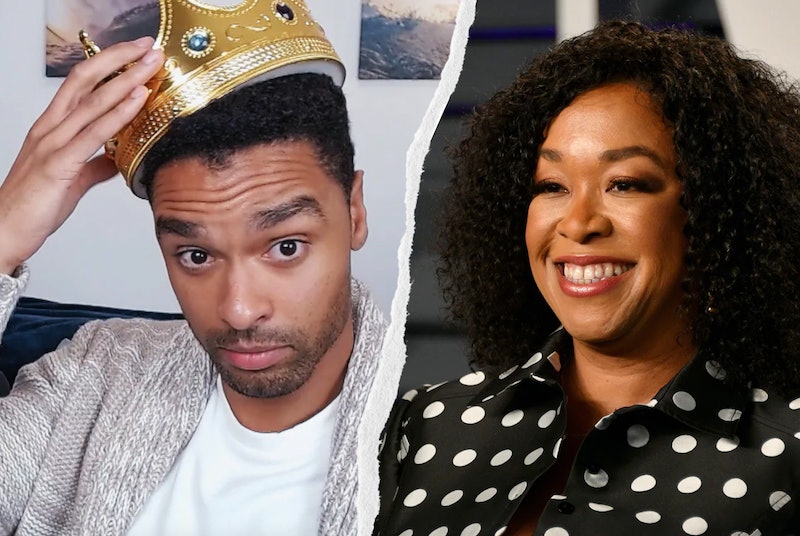 Nobody was prepared for Simon, Duke of Hastings, to depart the world of Bridgerton. Even executive producer Shonda Rhimes was shocked by Regé-Jean Page’s Bridgerton exit, but she was even more surprised by the intense mourning from fans, as she told Vanity Fair in a new interview on Tuesday, April 12. “I was really shocked, because usually that happens when I’ve killed off somebody that’s been around for a while,” she said. “Like, we didn’t kill him, he’s still alive!”

Bridgerton’s Twitter account announced on April 2 that Page would not return for its second season—in Lady Whistledown’s voice, of course. “We bid adieu to Regé-Jean Page, who so triumphantly played the Duke of Hastings,” the note read. “We’ll miss Simon’s presence onscreen, but he will always be a part of the Bridgerton family.”

Page later addressed his departure on Instagram, paying tribute to the people he worked with. “It’s been an absolute pleasure and a privilege to be your Duke,” he wrote. “Our incredibly creative and generous cast, crew, outstanding fans - it’s all been beyond anything I could have imagined. The love is real and will just keep growing.” Speaking to Variety, Page explained that his one-season arc drew him to the show, and he remains proud of his work. “I have nothing but excitement for Bridgerton continuing to steam train off and conquer the globe,” he said. “But there is also value in completing these arcs and sticking the landing.”

However surprised everyone may be, Rhimes still kind of saw it coming. Rhimes clarified that they had only signed a one-season deal with Page and offered him the opportunity to return for cameos in Season 2, which he declined. Page reportedly chose to focus on his burgeoning film career, leading fans to speculate which roles the dashing actor will choose in the future. But she still didn’t expect this level of outcry, given how Simon wouldn’t even be a major focus if Page had returned.

“I mean, really: What would Regé-Jean do, you know what I mean?” she asked. “We gave them their happily ever after. And now we have this next couple coming. And so yeah, I was like, whoa!” Rhimes went on to describe Page as “a powerful, amazing actor,” and she and her fellow Bridgerton crew realized how successful their first season was. “That meant we did our job,” she said. “Every season, our job is finding the right people and putting together this incredible, world-shifting romance.” Consider that box checked.

More like this
Twitter Is Burning As Phoebe Dynevor Reveals Daphne’s 'Bridgerton' Exit
By Sophie McEvoy
Netflix Shut Down 'Bridgerton' S3 Rumours About A “Very Dark” Storyline
By Bustle
Everything To Know About Schwartz & Sandy's, Vanderpump Rules' Newest Bar
By Brad Witter
Everything To Know About 'And Just Like That...' Season 2
By Jack Irvin and Grace Wehniainen
Get Even More From Bustle — Sign Up For The Newsletter
From hair trends to relationship advice, our daily newsletter has everything you need to sound like a person who’s on TikTok, even if you aren’t.