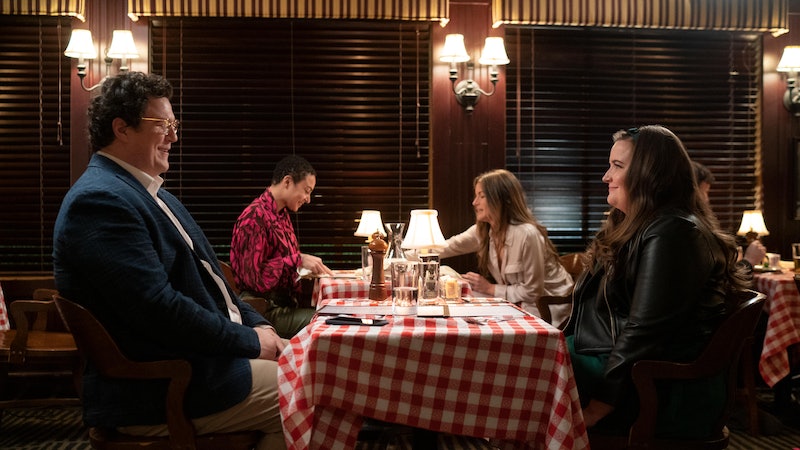 Casual dating can be both empowering and destabilizing. Add the societal pressures of navigating romance as a fat woman, and it can dredge up a host of insecurities. In Shrill’s final season, out now on Hulu, Aidy Bryant’s Annie wades into the exciting yet perilous waters of casual sex and lackluster flings and is forced to examine her own failings and preconceived judgments.

When we last saw Annie at the end of Shrill Season 2, she had just broken up with Ryan (Luka Jones) and was lighting fireworks into the Portland sky to celebrate her freedom. In Season 3, Annie is single and ready to make her mark in the dating world — but it quickly does not go according to plan.

“It is horrifying and humiliating in different ways,” Bryant tells Bustle. “[But this depiction] feels kind of compassionate to me.”

Annie gets entangled with a varied collection of men. There’s the horrifying one-night stand (played with an expert cringe factor Whitmer Thomas), who tries to pleasure her with barbecue sauce-covered hands; the blown-out-of-proportion crush Nick (Anthony Oberbeck), who can’t possibly live up to Annie’s expectations; and the tragically overlooked nice guy Will (Cameron Britton). Dating each of them, Annie must confront the bitter realities of rejection and unrequited feelings as well as her own internalized fatphobia in order to figure out what she really wants in love. “That was something we had on [on our minds while writing]: what it is to be fat and dating, and putting yourself out there and feeling like you have this thing that people might instantly reject you for,” adds Bryant, who also writes and produces Shrill.

While many of Annie’s experiences are less than ideal, the most tender and devastating one is her blind date with Will, a sweet divorcé. She walks into the restaurant, sees that he’s fat, and immediately rejects him. “Annie actually does the thing that she’s most afraid of to someone else — she gets set up on a date with a fat guy, and she instantly feels really uncomfortable,” says executive producer Lindy West, whose memoir the show is based on.

Will is a catch, yet all Annie can see is his weight and what this pairing would look like to everyone else. Instead, she decides to relentlessly pursue her season-long crush, Nick. On paper Annie feels that Nick is way more her speed: He’s in a vaguely creative field, he has some style, and he’s sociable. But in reality, he’s boring — and most importantly, he’s not actually that interested in Annie. “The way that women fall for the most mediocre, bare minimum guys,” West sighs. “Nick is not dazzling.”

Annie turns to Nick in hopes he will be the solution to her problems, but the experience only illuminates Annie’s unhealthy patterns and deeply rooted insecurities. “That felt most familiar to me,” says Bryant. “The feeling of this is happening, this is happening until it isn't.”

Annie completely overlooks the fact that Will is a grown up, with past relationships and healthy boundaries that he communicates openly and in a healthy way. We’re used to seeing Annie as a lovably flawed protagonist with a huge heart and lots of ambition, but through Will we see the real harm she’s capable of causing even when she thinks she means well. “This experience actually humbled her and made her able to see how she actually treated someone badly,” says Shrill showrunner Ali Rushfield.

In this relationship, it’s Annie who’s the immature one. It’s Annie whose inability to grow up and trust causes the problems. “She is so much less evolved than [Will] is,” says Rushfield. “In the adult world, she ends up kind of being the Ryan of their relationship.”

In the season’s best episode, Annie and Will and her best friend Fran (Lolly Adefope) and her partner Em (E.R. Fightmaster) spend a couples weekend at a beach house. Annie has apologized to Will, and we watch as they discover each other sexually and genuinely enjoy each other's company. While Fran and Em are taking their bond to the next step, Annie and Will are too. It feels like a real celebration of moving at your own pace. It only took a season for Annie to figure that part out.

More like this
'Ramy' Will “Probably” End With Season 4, According To Ramy Youssef
By Brad Witter
UK Viewers Will Have To Wait To Watch The Handmaid’s Tale S5
By Maxine Harrison
'Reservation Dogs' Season 3 May Finally Mend Bear & Willie Jack’s Relationship
By Gretchen Smail
18 Principal Ava Quotes That Prove She's The Queen Of Shade On 'Abbott Elementary'
By Grace Wehniainen
Get Even More From Bustle — Sign Up For The Newsletter