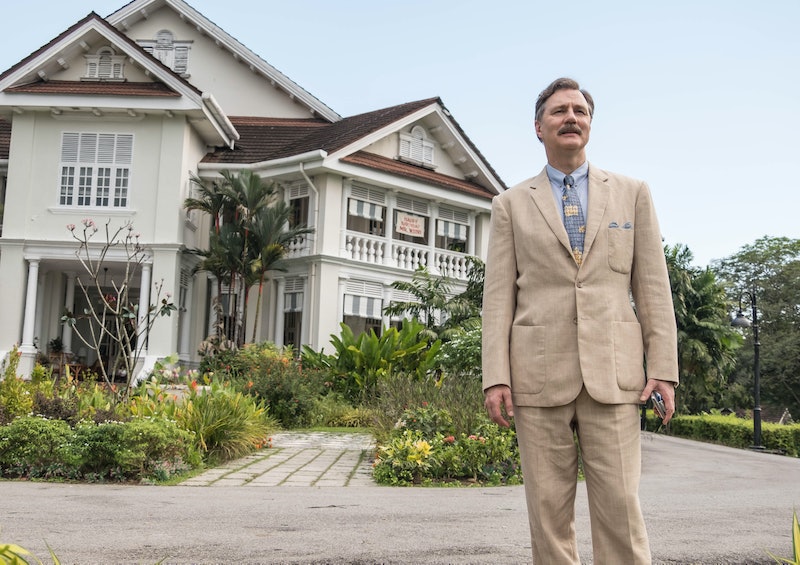 Based on JG Farrell’s satirical novel of the same, ITV's The Singapore Grip follows the story of a British family residing in Singapore during the second World War. Olivier Award-winning actor Luke Treadaway leads the drama's cast, which also includes Ab Fab's Jane Horrocks, In the Flesh star Luke Newberry, among others. But what else is there to know about ITV's latest adaptation? And where is The Singapore Grip filmed?

As the Radio Times reports, the series began filming in March 2019. Although set in Singapore, the drama was actually filmed across Malaysia, in locations such as Kuala Lumpur and Penang, due to the country's architecture — which per the Express producers felt better matched the 1940s time period in which The Singapore Grip is set.

Penned by Oscar-winning screenwriter Christopher Hampton, the six-episode period drama centres around the British Blackett family, who, whilst living in Singapore, become embroiled in conflict at the time of the Japanese invasion. The deterioration of the British Empire will also be a running theme throughout the new series, which touches upon colonialism and racism rife during this particular era.

However, the series has received criticism for its portrayal of British colonialism, with the British East and Southeast Asian media advocacy group BEATS telling Variety the series was an example of harmful "(non)representation" and "deeply upsetting."

Their statement read: “In a landscape where our creative industries are decimated, the Black Lives Matter movement has placed this country’s problematic view of its own colonial legacy firmly under the microscope. In this context, an expensively mounted TV adaptation of J.G. Farrell’s satirical novel, with colonial Singapore as its exotic backdrop, is a kick in the teeth to the U.K.’s East and Southeast Asian community. This is especially concerning at a time when anti-East and Southeast Asian hate crime has dramatically increased during the coronavirus pandemic.”

It continued: “The television adaptation could have taken a more enlightened perspective in keeping with the progress that has happened in the half century since the novel’s publication,” the organisation said. “Instead, even the cynical desperation and callous decadence of Farrell’s Caucasian characters is bled out in favor of jauntily-forced, comedic indulgence, presenting this traumatic period of Singapore’s history as little more than breezy and inconsequential.”

The show's writer Christopher Hampton responded with his own statement, given to Variety. It read: “any fair-minded viewer will easily understand that [‘The Singapore Grip’] is an attack on colonialism — and is indeed based on the last of a trio of books known as the ‘Empire Trilogy,’ which constitute perhaps the most celebrated attack on colonialism by a British novelist in the 20th century.”

He added: “Its very subject is possibly the greatest catastrophe to befall the British Empire during its decline, a disaster the colonists were themselves squarely responsible for.”

Hampton also addressed concerns about the lack of representation the show provides, with a cast of mostly white actors, despite the its setting. “The most sympathetic and resourceful of the central characters is a Chinese woman, a member of the Resistance against the Japanese, who is able to educate our hero and open his eyes to what he is already becoming aware of, namely the corrupt practices and casual racism of the ruling British elite,” Hampton said.

However BEATs countered this, arguing that both the show and book: “feature only one Asian character who remotely resembles a protagonist: Vera Chiang, ‘a mysterious Chinese refugee’ (‘Eurasian,’ according to the story, although this nuance is seemingly lost on ITV’s publicity department), whose main dramatic function is to cast a ‘spell’ over the story’s white male conscience, ‘Matthew.’ In the first episode, her every appearance is announced by keening erhu music while, despite her supposed refugee status, she models impeccable cheongsams and enigmatic smiles.”

BEATs are not the only critics of Singapore Grip, the show has also been met by backlash on social media with several prominent industry professionals sharing their thoughts on the show's failings.

Director Mingyu Lin wrote: "This does to Singapore what most Vietnam war films did to Vietnam - relegate a country who suffered through a horrific war into a backdrop for a foreign, white narrative where the only BESEA characters are portrayed as exotically sexual options or nameless aggressors."

While actor Siu-see Hung posted: "How can you justify doing this kind of colonial sh*t in this day and age @ITV? Focus is still completely on white bodies while I've yet to see British East Asians represented at all on our screens. #singaporegrip"