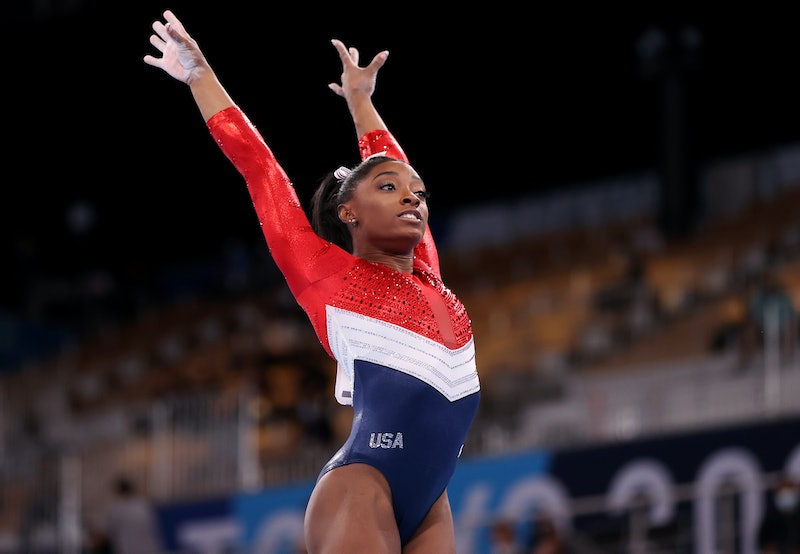 In a stunning shock for Team USA, Simone Biles pulled out of the women’s gymnastics team finals at the Tokyo Olympics on Tuesday, July 27 due to an apparent injury. USA Gymnastics issued a statement on Twitter confirming Biles’ removal from the team finals but clarifying that her participation in later events has yet to be determined. “Simone has withdrawn from the team final competition due to a medical issue,” the tweet read. “She will be assessed daily to determine medical clearance for future competitions.”

After the round was complete, Biles addressed the media and explained that she withdrew from the finals to preserve her mental health. “Whenever you get in a high stress situation you kind of freak out,” she said, according to CNN. “We have to protect our body and our mind. It just sucks when you’re fighting with your own head.” The gymnast said she was physically fine, but wasn’t sure if she would keep competing this week. “Physically, I feel good, I’m in shape,” she said. “Emotionally, that kind of varies on the time and moment. Coming to the Olympics and being head star isn’t an easy feat, so we’re just trying to take it one day at a time and we’ll see.” In light of Biles’ withdrawal, the team will now use July 28 as a “mental rest day.”

After talking to the press, Biles took to Twitter to issue a sweet response to fans who are supporting her decision to withdraw from the competitions: a simple white heart emoji.

According to reports, Biles, a four-time Olympic gold medalist, competed in her first rotation on the vault. However, according to the New York Times, she opted out of the twist she had planned, then stumbled on the landing. Afterwards, Biles was seen huddling with a trainer and then exited the competition floor with team doctor Marcia Faustin. She reportedly returned to the floor with a heavily strapped foot. USA Gymnastics have not commented on the nature of the injury, but according to MSNBC reporter Chris Jansing, the injury is not serious. “Physically she is fine,” Biles’ coach reportedly told NBC. “But she is done for tonight.”

Upon returning, Biles hugged her teammates Grace McCallum, Sunisa Lee, and Jordan Chiles and removed her bar grips, indicating that she would not be moving forward in the uneven bars competition. Chiles took her place as Biles cheered on her team from the sidelines. Team USA ended up winning the silver medal after her removal, with a score of 166.096 points, while Russia took home the gold with 169.528 points. Speaking to TODAY’s Hoda Kotb, Biles expressed gratitude for her team and praised their performances. “I'm OK, just super frustrated how the night played out but super proud of these girls that stepped up and did what they needed to do,” she said. “Now we're Olympic silver medalists so it's something that we'll cherish forever.”

Just a day before the women’s gymnastics team finals, after competing in the preliminary rounds, Biles opened up on Instagram about the mental toll of competing, admitting that the pressure can get to her. “It wasn’t an easy day or my best but I got through it,” she wrote. “I truly do feel like I have the weight of the world on my shoulders at times. I know I brush it off and make it seem like pressure doesn’t affect me but damn sometimes it’s hard hahaha! The olympics is no joke!” According to E! News, as of now, Biles is still scheduled to compete in the individual all-around competition on Thursday, July 29.