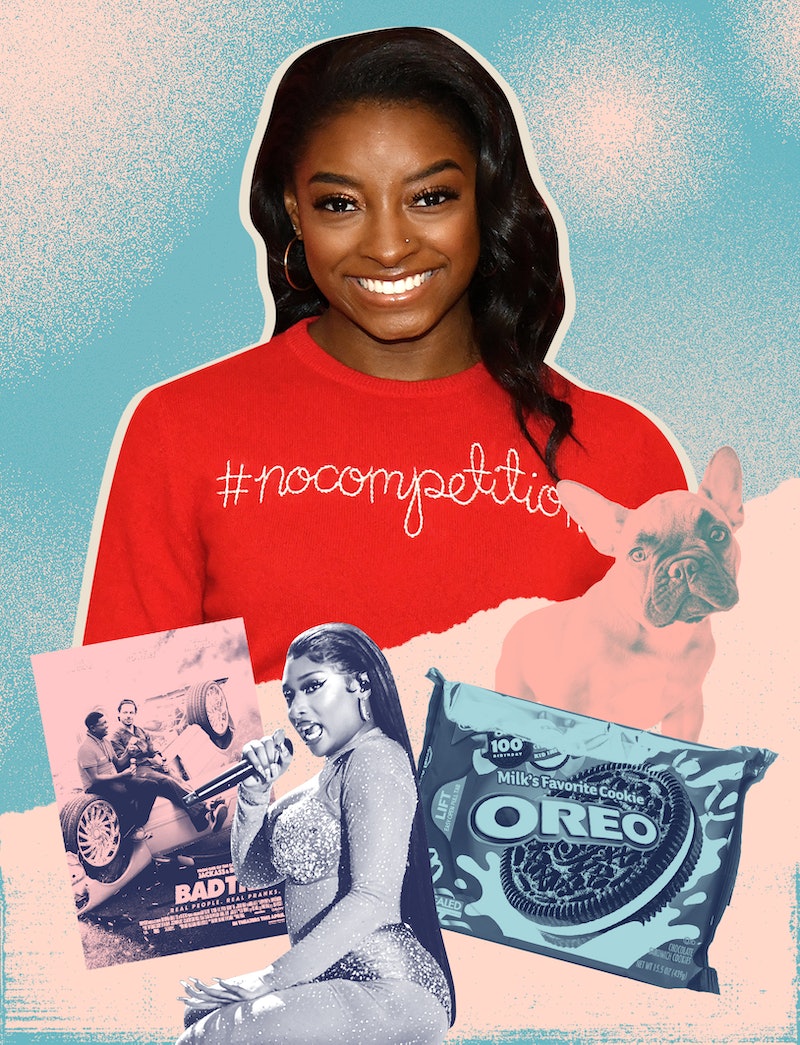 In “Pep Talk,” Bustle chats with celebrities about finding levity in a year of loss. This week, hear from the peerless Simone Biles as she prepares for next month’s Summer 2021 Olympics in Tokyo.

Simone Biles loves her French bulldogs. “Bulldogs,” plural, as in Lilo and Rambo, the latter of whom was adopted during lockdown. Adopting another puppy was the only quarantine “hobby” she was actually successful at, says Biles, who spent the past year in Houston, Texas. “They’re so small, but they’re mighty.” It’s a remarkably appropriate statement coming from the 4-foot-8 Olympian.

Last week, Biles won her seventh U.S. title, and last month, landed the most challenging vault in women’s gymnastic history. She claimed the crown of the most decorated world-champion gymnast of all time in 2019 after her fifth all-around international win. The 24-year-old is in a league of her own. But in the past year, fortunately, she’s had company, courtesy of Lilo, Rambo, and her boyfriend, NFL football player Jonathan Owens.

Ahead of the 2021 Summer Olympics, which begin July 23 on NBC, she talks to Bustle about being a “quaran-couple,” the benefits of therapy, and her go-to Nabisco snacks.

“I tried painting, I tried reading, I tried makeup, I tried this, I tried that, and they weren’t my craft — and that’s OK. God gave me one thing and said, ‘You’re going to be really good at it.’ I'll take that.”

When the Olympics were postponed in March 2020 and gyms shut down, how did you react?

We took seven weeks off before we got the all-clear, [meaning] we could go back to 20%-30% capacity in the gym. The seven weeks off were really refreshing. Spending time with family and friends released a lot of stress because you don’t really have to worry about anything. You can talk, laugh, and be yourself. You don’t have to think.

Did you pick up any hobbies in lockdown, like making sourdough?

Besides getting more animals? [Laughs.] Absolutely not. I'm so bad at everything. I tried painting, I tried reading, I tried makeup, I tried this, I tried that, and they weren’t my craft — and that’s OK. God gave me one thing and said, “You're going to be really good at it.” I'll take that and leave the rest.

As viewers, we’re used to seeing you in competition uniforms. What’s your favorite thing to wear outside of the gym?

I like to dress up, even if it’s jeans and a crop top, or a dress when I go out to dinner. When we compete, our leotards are a little fancier. I love that. I love the sparkles. But [it’s] different being able to wear something beautiful without the stress of competing with it on.

Before competing, do you have any rituals?

No, I’m not very superstitious, but I do love to listen to music while I get ready. I love Megan Thee Stallion, Beyoncé, and Rihanna. I like good vibes.

Thinking about team dynamics, is anyone the consistent “goofball”?

Zoe Miller. We have the same humor. She’s 15, and I see my younger self in her, [which] is why we click so well. She can make a joke out of anything. She’s just a good person to be around. She keeps my spirits high whenever I'm not in the mood to go to the gym.

Do you have any favorite memories from the past year?

I got to move in [to my new house] and pick the interior design. I got to spend quality time with my boyfriend, my friends, and my family, which I never would have had time to do if the Olympics were last year.

When did you meet your boyfriend?

Right before lockdown, literally two days before, and we’re still together — we’re a “quaran-couple!” If quarantine didn’t happen, I wouldn't have met him. We got to spend a lot of quality time to see if we really liked each other, and we did!

Was it hard to keep in touch when you weren’t able to see him?

Not necessarily, because we had FaceTime. [Jonathan] was training with his team, [the Houston Texans], during that time. It was like, “OK, we have to be careful.” I would go to his house one weekend, and he would come over to my house the [next].

And you mentioned adopting another French bulldog, too.

It was amazing to bring Rambo into my little Frenchie family. I honestly think — and I hope Lilo, my other Frenchie, doesn’t hear me — [Rambo] is my favorite. He’s such a little baby, but so spicy, so the name “Rambo” works perfectly for him. He’s the sweetest little pup. Oh, do you hear him? [Rambo makes noises off camera.] He’s making noises for you!

And in terms of other things that have brightened your past year, did you have a favorite TV show or movie?

I just watched Bad Trip. That was absolutely hilarious. Oh my goodness. I love Tiffany Haddish. She’s so outspoken, she’s funny, and she’s really down to earth.

Nabisco is the official snack sponsor of Team USA this year. Do you have a favorite snack?

Yes! I love Oreo cookies. My favorite kind, Oreo Heads or Tails, is actually discontinued, so sometimes I’ll actually make them myself.

Amazing. My sister [Adria] was included, which was especially fun. Growing up, we loved Ritz Crackers, the Oreo Cookies, the belVita Breakfast Biscuits, and Chips Ahoy! So we were all hands in — we did so many activities with different content.

A final question: The past year has been really tough. What advice do you have for someone who’s having a hard time right now?

Check on your mental health. Make sure you put that first. If you’re not mentally right, you won’t have the motivation to do anything and move forward. I used to see a therapist, and that has always been a great resource for me because it’s an outside ear. If you don’t want to really explain or vent to anybody else, [a therapist] is a good outlet. I’m not saying it works for everybody, but it helped me.