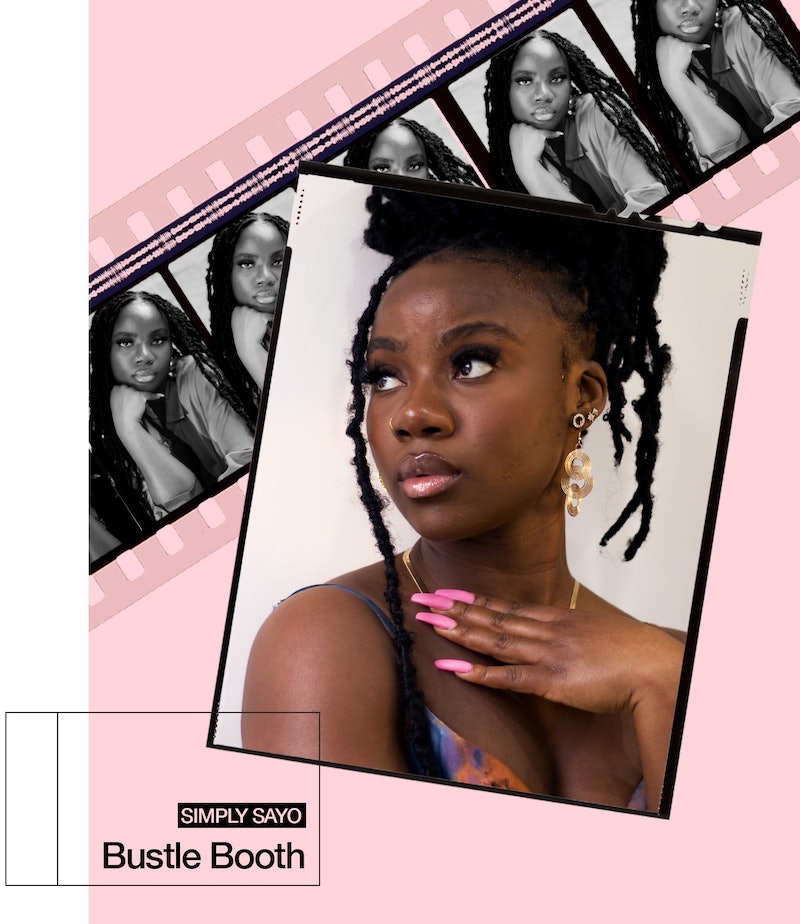 When 25-year-old Adéṣayọ̀ Tàlàbí (aka. Simply Sayo) uploaded her first “kpoetry” video on Instagram, she didn’t expect it to go viral. “I posted ‘When Will I AAYYEE Again?’ during the 2021 lockdown when everybody was fed up and missed being able to go out,” she tells me. “Once I posted it, my phone stopped working because of the engagement I received. Like myself, the video was short, witty, relatable, and evocative of emotion.”

Sayo, who lives in London, has loved writing poetry since she was a child. Prior to becoming a full time creator, she was working as a psychiatric health care assistant, a hospital cleaner, and completing her Masters. After her first video went viral, she had a “lightbulb moment” and “kpoetry” was born. She’s now skyrocketed to social media stardom, amassing over 400k followers across Instagram and Twitter thanks to her quick wit, lovable charm, and hilarious poetry skits soundtracked to Beethoven’s “Moonlight Sonata”.

Why such a solemn piece? “He’s my G! I’m honestly a classy babe and classy babes listen to classical music,” she says, adding, more seriously: “I chose it after experimenting with other classical tracks because I wanted a dichotomy and to juxtapose the seriousness and tone of the accompanying music and the playfulness of the poetry.”

Her themes range from commentating on Netflix’s Tinder Swindler and having “sneaky links” to spotting red flags, to that Matt Hancock scandal. But it was mainly old-school Nollywood films that gave her the idea. “I was always amused by the fact that the music [in the films] would often not be compatible with what was happening in the scene, and saw that it actually added comedy. So I adopted this in my work.” And it was a hit. Now it is difficult to scroll through social media without coming across Sayo’s videos, all of which she is dressed head-to-toe in traditional Nigerian wear, preaching classic aunty philosophy.

So where does she find inspiration from? “It’s very varied and broad, as I find inspiration in both the mundane every day annoyances, like men, as well as the more nuanced things in life, like advocating for sickle cell awareness,” she says. “Yorùbà Nigerian culture, Jamaican culture, and meme culture are all very important to me, so I pay homage to the various cultures I appreciate and love in my work. Culture, for me, is the foundation of identity and so incorporating it into my work is effortless and very natural.”

The satirical performance kpoet has been so successful that she was named one of Instagram’s rising stars to follow in 2022, and as a result, has made content creation her full time job. “Now, I don’t work hard, I hardly work,” she says. “Okay, I work for myself using Instagram and don’t consider what I do as work because I love it.”

Get to know more about Sayo – including her favourite karaoke song – in her Bustle Booth questionnaire below.

London, Greece, Maldives, and Tanzania. I belong in the beautiful heat and peace of the last three countries. I have London by default and geographical circumstances, tragically.

This is hard because I grew up during the golden age of cartoons. It’s hard to choose between Shaman King (it’s an anime, but I was obsessed); Sonic Underground; You-Gi-Oh; Samurai Jack; The Cramp Twins; Codename: Kids Next Door; Grim Adventures of Billy and Mandy… what was the question again?

Yeen Yuhs, Netflix’s Kanye documentary. I love how much self belief he had in himself even when others didn’t see this potential as naturally.

Probably I’m A Celebrity, Get Me Out of Here. Bit of kangaroo genitalia never hurt anyone.

I would pick “So Mi Like It” by Spice. I don’t know all the words, but it speaks to me on a spiritual level.

The woman I am becoming. Seeing my own growth this last year, and the growth of other creatives like Madame Joyce – an amazing podcast host; Elsa Majimbo, an icon; Enioluwa Adeoluwa, a beautiful soul and creative; Salem King, who is a powerhouse of talents; Dreya Mac, a super talented musician; Tega Alexander, an aspiring actor and your favourite brands’ favourite content creator; Victor Kunda, a model and content creator; and many more Black talents forging careers on Instagram by showcasing their skillset, personalities, and creativity is a beautiful thing.

This is one of the things I already love the most about what I do. By just freely behind myself through my content and sharing it with the world, I now have a fast-growing and incredible community around me who feel encouraged to completely embrace themselves too. When I get messages like these, especially from Black women, I just feel really privileged to be a part of that journey because I’m just being me. I want people to watch my performances, both on and offline, and say “wow, what a mess. I love it!”