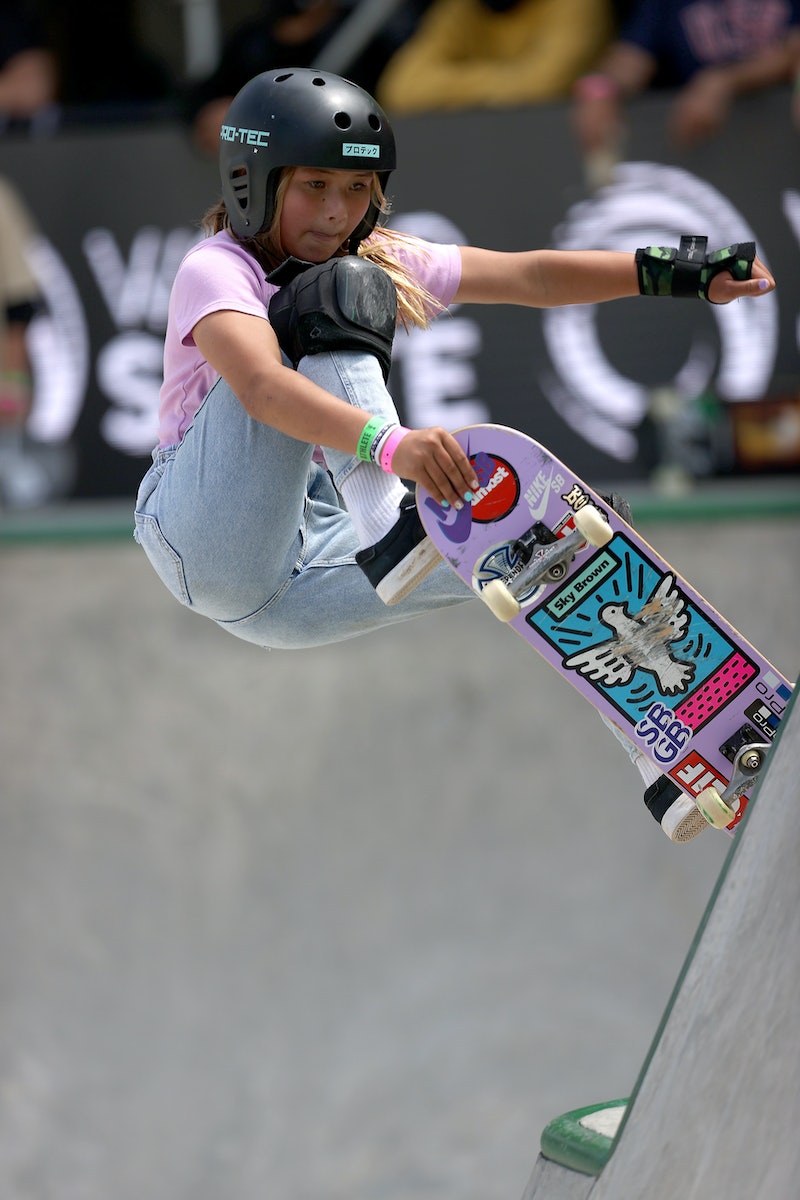 Sky Brown has been hitting headlines and breaking records even before stepping onto the plane to the Tokyo Olympics. The 13-year-old Team GB skateboarder is currently ranked third in the world and while some athletes have parents who push them, Brown’s ambition to compete has come from within.

“My parents thought it would be too much pressure, so we weren’t going to do it,” she told the Guardian of her decision to compete in the Olympics. She revealed that Team GB told her to “‘Come be on our team, there’s no pressure, just get out there and have fun.’ That made my parents feel a little better. But I begged and begged.”

Brown’s dad is from England and her mum is Japanese. For half the year she lives in California and the other half in Japan with her parents and younger brother Ocean who is nine and also a super promising surfer and skater.

Brown will be competing in the Women’s Park event at her debut Olympics. It’ll see 20 skaters go up against each other for a podium place. Her age may be the thing that's hitting the headlines right now but Team GB skateboard manager Darren Pearcy told Sky, “she's got this! She's a natural talent. But I'm always careful about how I talk about that because I know how hard she works as well."

Here’s everything you need to know about Sky Brown.

Like most teenagers, Brown is an avid social media user. She shares her skating and surfing escapades with her 838k followers on Instagram.

Brown also runs a YouTube channel with her younger brother named Sky and Ocean, after themselves. The pair post vlogs of their day-to-day life and adventures, including surfing in Hawaii and skating at Venice Beach.

You can also follow Brown on TikTok where she shares some seriously cool skating tricks and dances with her friends.

Brown’s talent isn’t the only thing that’s caught people’s attention in the run-up to the Olympics. When she steps out in her event the pro-skater will only be 13 years old. Sky News explains that there are only two other Olympians to have competed at such a young age. In 1928, 13-year-old swimmer Margery Hinton represented Team GB at the summer Amsterdam Olympic Games and in 1932 11-year-old Cecilia Colledge participated in the winter Olympics as a figure skater.

Brown’s interest in skateboarding started before she could even walk. Her dad Stuart told the Guardian that she started at a young age. “I remember her, as a baby, on her tummy all the time on a skateboard,” he said. “It sounds like a cliche but it was her favourite toy. She liked riding it around the kitchen.”

Brown qualified for the Olympics in Long Beach in California in 2019, but thanks to an injury it wasn’t plain-sailing. She fell off her board a week before the event, breaking her arm. However, she managed to wow the judges, coming first despite her arm being in a cast.

That wasn’t the only obstacle she’s had to overcome on her route to the Olympics. In May 2020 Brown fell 15ft off her board, head first, breaking bones and fracturing her skull. She shared footage of her fall on her Instagram and wrote in the caption, “Never Broken. I know a lot of people are worried about me but don’t worry, I’m okay. I’m excited to come back even stronger and even tougher. My heart wants to go so hard right now. I’m just waiting for my body to catch up. Thank you everyone for sending your love, messages and supporting me. I’m sorry to make you worry. I’m gonna be just fine.”

She’s made a full recovery and will skate on the Olympic course in Tokyo on Aug. 4.