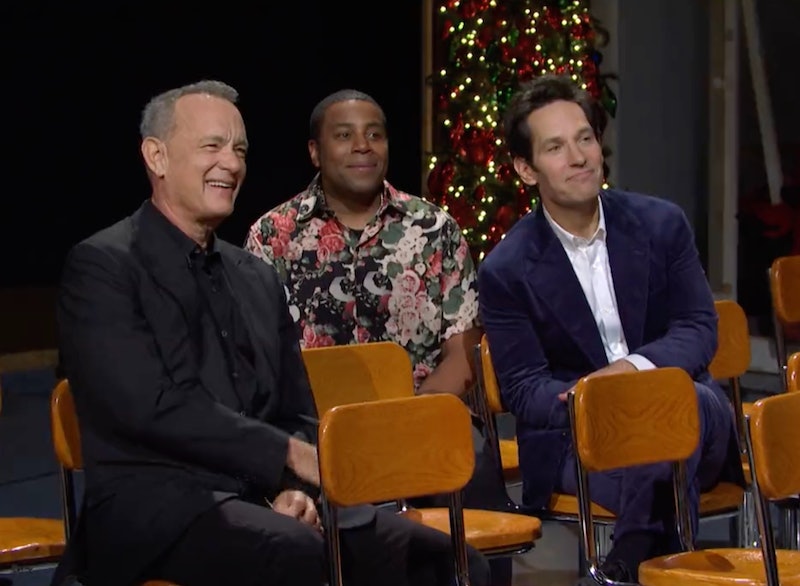 Amid an omicron variant surge, Studio 8H ended up being way emptier than expected during the Dec. 18 Saturday Night Live episode. Originally meant to feature Charli XCX performing and Paul Rudd hosting for the fifth time, the last episode of 2021 filmed without a studio audience, no musical guest, and with a very limited cast and crew — which included just two musicians standing in for the whole band. “I’m devastated and heartbroken,” Charli XCX tweeted hours before she was meant to take the stage. “All of our crews and teams have worked so hard all week alongside the SNL team to bring the most amazing musical performance to life.” But she assured everyone that she’s “safe and healthy,” and reminded everyone to “get vaccinated if you haven’t already.”

The only two cast members to stay behind to present the show with Rudd were Kenan Thompson and Michael Che, and they were joined by two surprise celebrity guests: Tina Fey and Tom Hanks, who, like Rudd, have hosted SNL over five times.

“COVID came early this year,” Hanks explained when he walked out on stage, greeted by empty chairs. “We sent home our cast and most of our crew. But I came here from California, and if you think I was going to fly 3,000 miles and not be on TV, well then you’ve got another thing coming.” When Rudd took the stage to join the “five-timers club,” he pretended to wave to a nonexistent audience, before openly admitting that he’s “pretty disappointed” at the turn of events.

Considering how the whole episode had to be overhauled just hours before it aired, all of the comedians carried the show as admirably as they could. The episode ended up being mostly a throwback episode, with fan-favorite sketches being brought out of the vault. This included Justin Timberlake and Andy Samberg’s 2006 musical sketch “D*** in a Box,” Martin Short and Paul McCartney’s 2012 “Holiday Pageant,” and Eddie Murphy’s amusingly frantic “North Pole News Report” from 2019, among many others.

The episode did feature some new pre-recorded skits, which included the Kate McKinnon and Aidy Bryant skit “Grandchildren.” In it, Paul Rudd’s character attempts to direct two moms for a HomeGoods commercial. But when prompted to say what HomeGoods item they’d want for Christmas, the women are unable to blurt out anything other than “grandchildren” — undoubtedly lampooning a holiday-with-parents conversation that many of us have endured.

There was also “An Evening With Pete,” a black-and-white skit featuring Pete Davidson that was shot in the style of Raging Bull. In it, an aged Davidson in the year 2054 reflects on his waning fame. He sadly delivers Weekend Update with a robotic Colin Jost, awkwardly spoofs Eminem’s “My Name Is,” and sings with what’s supposed to be an urn full of Machine Gun Kelly’s ashes. But by the end of the skit, everything is in color, and Davidson sings goodbye to the camera, leading to some wondering (yet again) if Davidson is stepping away from SNL.

“Weekend Update” was similarly retooled, with Fey and Che sitting in chairs and testing jokes on their audience, which comprised of just Thompson, Hanks, and Rudd smiling encouragingly back at them. Che noted that Jost wasn’t there, to which Fey responded, “It’s not what you think. He’s having work done,” she said, pointing to her face.

All in all, it was an extremely OK episode given the circumstances. But some viewers felt like SNL continuing to air the episode was an unnecessary and grim reminder of how hard everything has been lately. “This episode is pretty depressing. I understand why it happened, but the response could’ve been a lot better,” one viewer tweeted. Another noted, “‘I’m extremely disappointed’ sums up the last two years quite well.”

Still, other viewers found ways to bring comedy to an otherwise depressing situation. Some shouted out the lone saxophone player on the show.

Others made jokes about the lack of an audience.

At the end, Rudd closed out the show with style. “Well, ladies and gentlemen, that’s our show,” he said as Fey, Thompson, Che, and Hanks joined him on stage with masks on. “What a crazy week and an even crazier day. ... I want to thank the cast, the writers, and the crew, and of course, Charli XCX for working so hard this week under such stressful circumstances.” He added that he knows this wasn’t the show people expected. “But that’s the beauty of this place. Like life, it’s unpredictable,” he said. “As my good friend Tom Hanks once said in a movie, life’s like a big weird chocolate bar.”