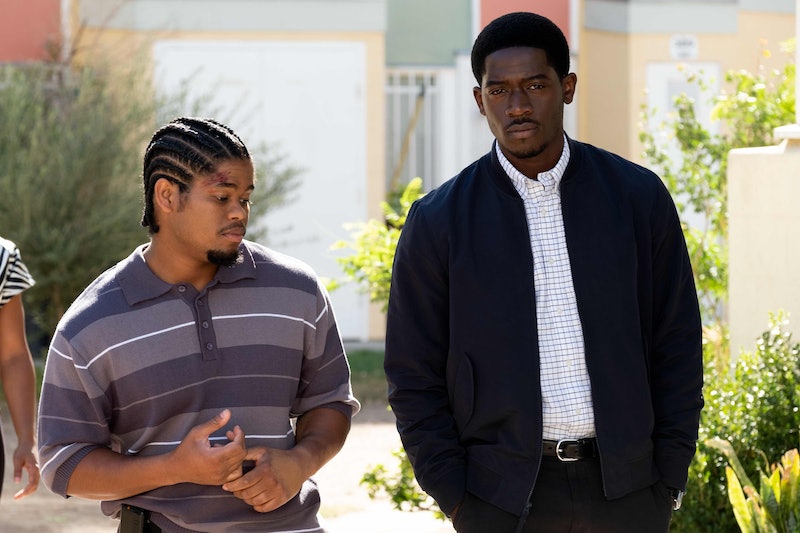 FX’s Snowfall explores the rise of the crack epidemic in 1980s Los Angeles and its effect on young drug dealer Franklin Saint (Damson Idris), who graduated from selling marijuana to joining a cocaine ring in 2017’s Season 1. The hit crime drama is now in Season 5, currently taking place in 1986, and Franklin’s drug business has earned him a whopping $100 million fortune — and many enemies. The March 9 episode of Snowfall will see the South Central projects raided by the Los Angeles Police Department’s C.R.A.S.H. (Community Resources Against Street Hoodlums) unit. Created in 1979 to combat gang and drug-related crimes, the controversial task force actually existed in real life and was the subject of a major corruption scandal.

C.R.A.S.H was launched in response to the late ’70s rise of street gang violence in the South Central Los Angeles area. According to a 2001 Frontline report, the unit assigned LAPD officers to specific local gangs and encouraged them to get to know the ins and outs of each member’s lives in order to stay on top of their actions. “It’s my job to know who’s in that gang, what their nicknames are, where their girlfriend’s pad is, what kind of cars they ride around in, what their tattoos are, where mom lives,” said former officer Brian Liddy. “We get to know as much [as possible] about that gang. That includes knowing the history of the gang — how it started, where it originated, how it came to be, what the gang is all about.”

Cops on the task force notably drove unmarked cars and were trusted to create their own daily schedules based on gang activity, which led to controversy over C.R.A.S.H. officers’ lack of supervision. While some considered the unit’s actions successful due to decreased crime rates, others alleged the group operated like a gang itself, as its officers would unethically befriend the gang members and later set them up for arrests.

“They would drive up into a neighborhood and snatch one of the guys that know how to fight real well. And they'll take them to another neighborhood just to see them fight,” former Temple Street gangster Ruben Rojas told Frontline. “Their job was to keep us off the street... But they just forgot that, you know? You just don't put cops in neighborhoods like that, because there is a lot of temptation, and the temptation will get you.”

Following a gang-related drive-by shooting in South Central in 1987, then-Chief of Police Daryl F. Gates began a C.R.A.S.H. initiative titled Operation Hammer, which aimed to further control the area by instructing officers to arrest suspected gang members. Operation Hammer led to mass arrests of mainly Black and Hispanic individuals, garnering accusations of racism against the LAPD. Amid the initiative’s peak in April 1988, a whopping 1,453 citizens of South Central LA were arrested in a single weekend — but as of a few days later, only 103 arrests actually resulted in criminal charges, including 58 alleged narcotic-related felonies and 35 misdemeanors ranging from weapon possession to mere loitering.

According to the Los Angeles Times, a police raid on two LA apartment buildings in August 1988 saw officers use excessive force on residents, destroy their belongings, and even spray paint graffiti reading, “LAPD Rules.” The violent incident left many individuals injured and humiliated, and officers only found a few ounces of marijuana and less than an ounce of cocaine. “We weren’t just searching for drugs. We were delivering a message that there was a price to pay for selling drugs and being a gang member,” officer Todd Parrick admitted in a retrospective interview conducted in 2001.

Given that Season 5 of Snowfall takes place in 1986, the crime drama could delve further into the impact of Operation Hammer. But future seasons of the FX drama have even more material to work with, as the late ’80s initiative only served as a precursor for the events that’d one day lead to the disbandment of the C.R.A.S.H. unit.

In 1989, ex-Marine Rafael “Ray” Perez was hired by the LAPD and worked undercover on its narcotics branch before joining C.R.A.S.H.’s Rampart Division in 1995, where he claims to have discovered — and engaged in — extreme police misconduct. Allegedly urged by his partner, Nino Durden, Perez started “stealing drug money” and later began “stealing and dealing pounds of cocaine” in 1998, per Frontline.

Perez was arrested, but while preparing to serve time in prison, he made a deal with prosecutors and informed them about many instances of misconduct within C.R.A.S.H. during interviews. He took responsibility for his actions but also blamed the unit’s culture for fostering such behavior. “We vaguely sensed we were doing the wrong things for the right reasons. Time and again, I stepped over that line. Once crossed, I hurdled over it again and again, landing with both feet sometimes on innocent persons,” Perez said during his 2000 sentencing. “My job became an intoxicant that I lusted after.”

Several of Perez’s claims were verified by investigators, uncovering proof of misconduct by 70 other Rampart officers and leading to more than 100 convictions being overturned. However, his credibility soon came into question due to five failed polygraph exams and prisoners’ claims the officer expressed desire in “retaliating against the LAPD and burning cops he didn’t like.” “You can’t trust Rafael Perez,” Deputy District Attorney Richard Rosenthal said in 2001. “He’s a perjurer. He is a dope dealer. He’s a thief, among any other numerous adjectives you could come up with that would negatively describe his personality.”

Perez was sentenced to five years in prison in February 2000 for stealing cocaine from an LAPD evidence locker and released on parole in July 2001 due to a plea deal. After Durden cut a deal with federal prosecutors, Perez was charged later the same year with shooting and framing 18th Street gangster Javier Ovando during his time in the C.R.A.S.H. unit. Perez then served two more years in prison and was released in June 2004. The controversial and disgraced officer has served as inspiration for characters in films including Training Day and City of Lies. In 2007, rapper Biggie Smalls’ family served Perez with a since-dismissed lawsuit for allegedly playing a role in his mysterious 1997 murder — but that’s a whole other story.

As a result of the initiative’s many controversies, the LAPD announced C.R.A.S.H. would be disbanded in March 2000 amid Perez’s first prison sentence. According to CNN, the police department planned to replace C.R.A.S.H. with a new unit within 30 days and promised it’d feature “stringent management oversight including monthly audits and on-site inspections.” C.R.A.S.H. was then replaced with the LAPD’s Gang and Narcotics Division, which exists through today and, per its official website, promises “more effective investigations, a quantifiable increase in arrests and a reduction in the crime rate.”

More like this
The 'Black Bird' Stars Are Both Heading Back To Apple TV+
By Brad Witter
Anthony Templet Wants To “Live Normally” After Killing His Father
By Brad Witter
This New TV Show Revisits The Most Controversial True Story From Hurricane Katrina
By Brad Witter
Dr. Anna Pou Is Still Practicing Medicine After Facing Murder Charges
By Brad Witter
Get Even More From Bustle — Sign Up For The Newsletter