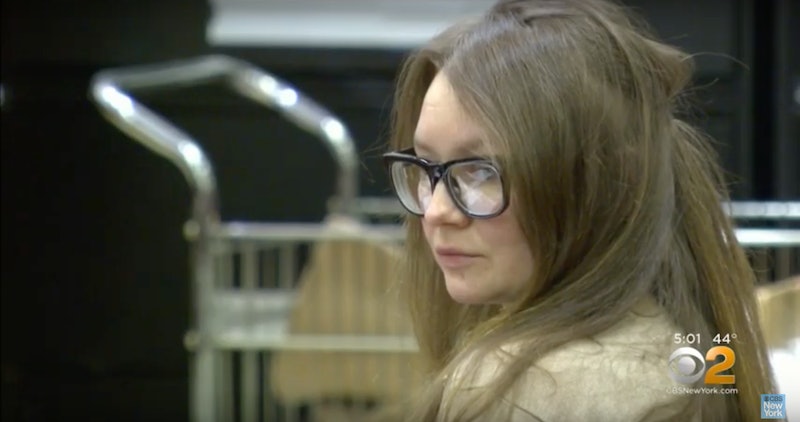 In 2019, infamous "SoHo Scammer" Anna "Delvey" Sorokin was sentenced to four years in prison. The subject of the fourth episode of HBO’s docuseries Generation Hustle, the 30-year-old Russian-born con artist was convicted of eight counts of fraud in April 2019. By that time, Sorokin had racked up massive bills by integrating herself into New York City's social scene, where she posed as a well-off German heiress named Anna Delvey.

“The thing is, I’m not sorry,” she claimed in 2019 after she was sentenced, per The New York Times. “I’d be lying to you and to everyone else and to myself if I said I was sorry for anything.” She added that she only regrets “the way I went about certain things.”

Now, Anna Sorokin is currently being held by Immigrations and Customs Enforcement (ICE). Though she was released early from prison on parole for good behavior in February 2021, ICE took her into its own custody on March 25 while the Department of Homeland Security determines whether to deport her back to Germany. (Per the Daily Mail, sources said Sorokin was scheduled to be deported to Germany on March 26, and it’s unclear why that didn’t happen.) Per Insider, ICE attorney Susan Egan argued that Sorokin has to remain in custody because she has not learned her lesson. This was largely due to a March 10 BBC News report where Sorokin said that crime pays, “in a way.” (She also appeared to brag about being a “sociopath” on her newly created Twitter and Instagram accounts.) Sorokin’s attorney said the article misrepresented her, and that she was trying to say she never aspired to be publicly famous.

This isn’t the first time Sorokin claims that her quote was taken out of context. In February, she clarified to Insider that her 2019 New York Times quote was also misrepresented. “I have to deal with the consequences of my actions, yeah. But to just sit around and just think about everything I've done — it's not going to have changed it. I don't know. It would be a huge waste of my time,” she said. “I did what I did. And I was, I don't know, 23, 24, 25. I'm just trying to fix things and move on.”

As Vanity Fair and The Cut reported, leading up to her 2019 arrest, Sorokin claimed to have an enormously wealthy father and a trust fund worth tens of millions; in actuality, she's the daughter of a Russian truck driver who came to the United States in 2016, according to the Daily Beast. Sorokin was accused of scamming businesses and friends out of $275,000 over the course of a 10-month period in New York, during which time she stayed in luxury hotels, went on expensive shopping sprees, and dined at upscale restaurants despite not being able to foot the bills.

Rachel Williams, who wrote the aforementioned Vanity Fair story, says that Sorokin invited her on a supposedly free trip to Morocco in 2018, only to stick her with the $62,000 bill. Authorities arrested Sorokin several months later and charged her with grand larceny, theft of services, and several other charges. Sorokin was offered a plea deal in December 2018 that would have allowed her to be released from prison in early 2019, but she rejected it and the case went to trial.

“This is the most traumatic thing I have ever been through,” Williams said in court during Sorokin's trial, according to Rolling Stone. “I wish I had never met Anna. If I could have gone back in time to not be where I am today, I would. I wouldn’t wish this on anybody.”

Sorokin's story made international news, and she’s now the subject of not only Episode 4 of HBO’s Generation Hustle but Netflix’s upcoming Inventing Anna series. In addition, Williams wrote a 2019 book about her experiences with Sorokin, titled My Friend Anna.

Although Sorokin received her share of criticism for the scheming, some argued that her conviction was evidence of women being punished more harshly than men for white-collar crimes. For instance, Sorokin's sentence is longer than that of Kareem Serageldin, the only Wall Street banker who went to jail in conjunction with the 2008 financial collapse. Writing in the Times, Ginia Bellafante noted that, prior to charging Sorokin, Manhattan District Attorney Cyrus Vance Jr. had opted not to press charges against Harvey Weinstein or Dominique Strauss-Kahn, two powerful men who had been accused of sexual assault. (Both Weinstein and Strauss-Kahn denied the allegations.)

Per Insider, Sorokin was working on a book about her experiences in prison and a project called “Anna Delvey TV” before she was taken into ICE custody. It’s unclear if and when Sorokin will be deported back to Germany, but she told Insider in February that she still goes by the name Anna Delvey. “Why shouldn't I?” she told Insider. “I'm a movement by myself.”

This article was originally published on May 9, 2019