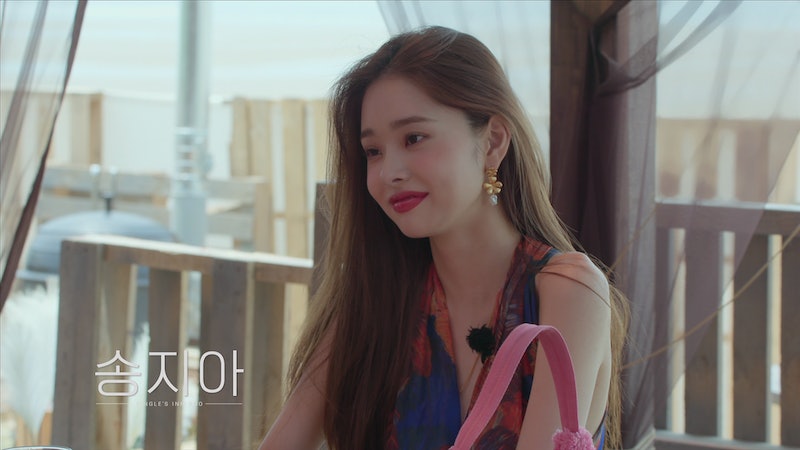 Netflix’s Single’s Inferno offers a fresh new take on the reality dating series format, and since its December 2021 release, viewers worldwide have watched over 17 million hours of the show. The first South Korean reality series to enter the platform’s global Top 10 chart, Single’s Inferno follows a group of twelve singles — six men and six women — looking for love while trapped on a deserted island with limited resources. In order to escape the island for a night away in paradise (aka a luxury hotel), the individuals must couple up, but they can’t share their ages and occupations before doing so. The show’s secrecy aspect keeps the contestants from making early judgments about each other, which comes in handy, as a few are already celebrities in their own rights. One of the famous lovelorn singles is Song Ji-a, and here’s everything you need to know about the Single’s Inferno star, including her job, age, Instagram, and more.

Ji-a was born and raised in Busan, South Korea, and lived there for 18 years before moving to Seoul for college, though she continues to speak in her native dialect today, per The Smart Local. She attended Hanyang University as a Korean traditional dance major starting in 2016 and graduated in 2020, just a few months after launching her successful YouTube channel in August 2019. Now 25 years old, Ji-a holds more than 1.6 million subscribers on the platform, where she posts beauty, fashion, and cooking videos that regularly amass over a million views each. Her career as a full-time influencer allowed her to foray into television work even before Single’s Inferno, as Ji-a’s appeared on Korean variety shows including Follow Me, Video Star, and Friends (not to be confused the iconic American sitcom).

As you may expect considering her large YouTube subscriber count, Ji-a has a major fanbase on her Instagram account — more than 2.7 million followers. She’s clearly comfortable in front of a camera lens, as her grid boasts many well-lit selfies, OOTD posts, and photos of her dog, Moongchi, who also has their own Instagram page with over 34,000 followers. Ji-a also seems to have a penchant for high fashion, as she regularly shares snaps from shopping trips to Yves Saint Laurent, Alexander McQueen, and Louis Vuitton. Additionally, she crafts sponsored posts for beauty brands like Lancôme and Dr. G.

In a recent YouTube video titled “My Bucket List For 2022 & My Future Videos,” Ji-a revealed she hopes to get a driver’s license this year and promised viewers a car reveal video in February 2022 if she passes the test. Noting that she’d love to visit Hawaii and drive around the islands, according to The Smart Local, the influencer said she’s looking to travel more as COVID-related restrictions decrease. Other New Year’s goals mentioned in the video include learning to speak both English and Chinese, so Ji-a will clearly be doing a bit of studying this year.

More like this
Jin-young Reflected On His Relationship With Seul-ki After 'Single’s Inferno'
By Brad Witter
Matteo Berrettini & Ajla Tomljanovic Split Shortly After Filming Break Point
By Brad Witter
Nick Kyrgios Wants To Marry His Girlfriend & Start A Family “Soon”
By Brad Witter
Love Is Blind’s Natalie Claims Shayne Signed Up For 'Perfect Match' While They Were “Still Together”
By Brad Witter
Get Even More From Bustle — Sign Up For The Newsletter
From hair trends to relationship advice, our daily newsletter has everything you need to sound like a person who’s on TikTok, even if you aren’t.