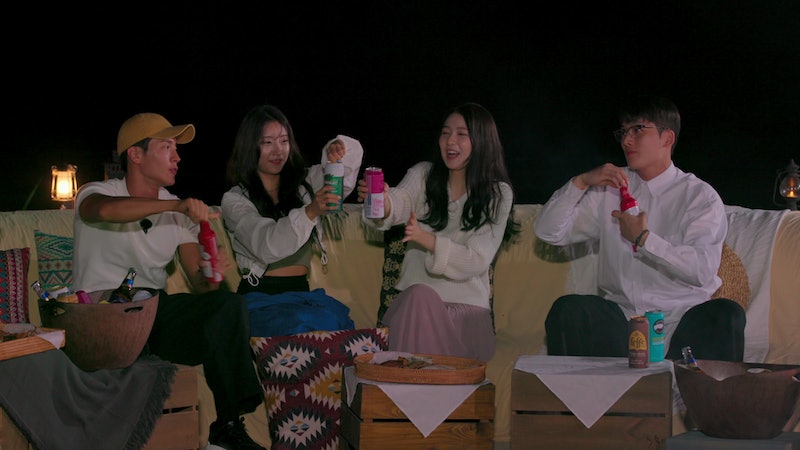 Netflix’s Single’s Inferno may be the perfect next marathon-watch for fans of reality series like Love Island or Terrace House, or anyone who enjoys seeing strangers looking for love while trapped in a deserted location. Since its premiere on Dec. 18, viewers around the world have reportedly spent over 17 million hours watching the South Korean dating show, which reached the top 10 of Netflix’s global chart for non-English language series. Over Season 1’s eight episodes, Single’s Inferno follows 12 singles stranded on an island in Saseungbong, Ongjin with limited resources, and they must find a romantic partner in order to earn a date night in paradise, aka a luxury hotel away from the island.

But there’s a catch: The men and women aren’t allowed to discuss their ages or occupations while on the island, and they can only share such details once granted an evening in paradise. Instead, the lovelorn individuals must focus on building pure attraction to one another or risk never leaving the island (until production concludes, of course). The Season 1 finale aired Jan. 8 on Netflix, so here’s everything you need to know about the cast members of Single’s Inferno, including their jobs, Instagrams, and more.

With three men competing for her hand, Song Ji-a is the most sought-after woman in the series. After studying traditional Korean dancing at Hanyang University, the 25-year-old is now a successful beauty vlogger on YouTube with more than 1.71 million subscribers on the platform. She also currently holds over 2.9 million followers on Instagram, where she shares her glamorous fashion, sponsored posts, and photos of her dog.

One of Song’s suitors is Choi Si-hun, who’s been said to look like K-drama actor Lee Jong-Suk by other individuals on the island. The 30-year-old cast member works as the chief executive of fashion headwear brand HOTEN, and his Instagram page features many, many selfies as well as photos of Choi modeling the brand’s products and other fashionable clothes. His account currently holds over 789,000 followers.

Kang So-yeon had to hide more than one job from her fellow islanders, as the 34-year-old contestant is the co-owner and CEO of a gym called HitFit Boxing, the CEO of sports apparel brand GoodRound, and a former professional boxer. She also works as a model and is quite active on her YouTube channel, where she mainly showcases her athleticism to more than 114,000 subscribers. Her many talents and professions are also showcased on her Instagram account, where she has over 868,000 followers.

While he seemingly doesn’t have a personal Instagram account, On Jin-taek can still be seen on the platform through his British-style tailored suit brand Ascottage’s account, where he often models its clothes for its 58,000-plus followers. The 30-year-old appears to serve as the brand’s CEO, style adviser, marketer, and manager of its Seoul location.

Despite fans on Reddit claiming she deleted her Instagram account following Episode 6, Shin Ji-yeon seems to have since created a new account after her old one was hacked — and she’s already racked up over half a million followers. While the reason she was hacked is unclear, the 25-year-old contestant stirred up controversy on social media after being praised for her “pure” and “white” looks on the show, which sparked conversation about Korea’s beauty standards. Aside from the controversy, she’s currently studying neuroscience at the University of Toronto, inspired by her grandfather’s Alzheimer’s diagnosis.

After scoring second place at the 2019 Mister Model Worldwide competition in New Delhi, India, Kim Hyeon-joong works as a model and personal trainer. The 28-year-old has over 413,000 followers on Instagram, where he shows off his musculature and posts selfies in high-fashion attire.

Yet another fitness-focused contestant, An Yea-won works as a personal trainer, model, and beauty influencer with over 346,000 followers on Instagram. There, she posts her favorite fashion looks, professional photoshoots, and shots from glamorous vacations. Like many of her Single’s Inferno castmates, the 27-year-old is also a budding YouTuber with nearly 10,000 subscribers.

At this point, it probably doesn’t come as a surprise to learn contestant Kim Jun-sik dabbles in fitness modeling. But the 28-year-old Seoul native also works as the CEO of a startup called KAMEE, which produces health-focused honey and nut products made with ginseng. On Instagram, Kim promotes his company, shows off his physique at the gym, and shares modeling shots with his 230,000 followers.

One of the series’ newer contestants, having only entered in Episode 5, Yahoo! recently reported Kim Su-min is 24 years old. According to Reality Titbit, she works as an actress and has appeared in commercials for KFC and Angel-in-us coffee. Her Instagram page has over 181,000 followers, and she mainly posts selfies, food photos, and glimpses into her acting career.

Moon Se-hoon also entered Single’s Inferno late in the season, but we’ve since learned he’s 27 years old. Despite having more than 632,000 followers on Instagram, his page is fairly new with only 16 posts. But the photos on his account let us know he’s an animal lover who is close to his family and enjoys posting selfies. According to the series, he owns and operates a catering business for a living.

Seong Min-ji’s Instagram is quite established, with over 300 posts and 250,000 followers, so we can piece together a few details about the 24-year-old’s life. She works in the entertainment industry as a model for brands including True Curling, owns quite a bit of high-fashion clothing, and has a penchant for fine dining. She also appeared alongside Kim Su-min in a commercial for KFC.

Some viewers may recognize Cha Hyun-seong as a dancer for K-pop singers including Sunmi of the Wonder Girls. The 30-year-old also works as a model and has an Instagram following of over 927,000 users, with whom he shares dance rehearsal footage, photos of his physique, and luxurious vacation shots.