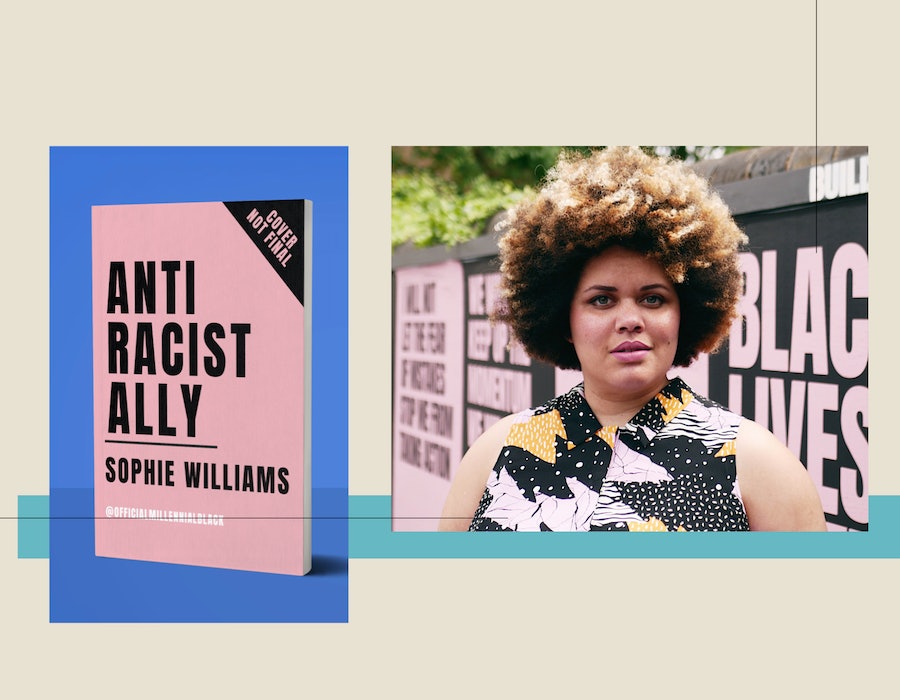 Author and activist Sophie Williams has just announced the arrival of a new book, Anti-Racist Ally, An Introduction to Action & Activism. Described as a "punchy, pocket-sized guide," Anti-Racist Ally will unpick complex topics surrounding racism and white supremacy and offer advice to those looking to deepen their anti-racism action.

Williams has been one of the UK's leading voices in the conversation around anti-racism and effective allyship for a number of years but in May 2020, an Instagram post brought new levels of attention to her work. The post went viral within hours and was shared by superstar accounts, including Justin Bieber's. Writing last month for Bustle UK about the experience, Williams explained why she chose to build on the momentum her viral post had created: "I decided that, if this was the moment ... I had to do everything I could to seize the opportunity and make real change."

And that's exactly what she's done. Anti-Racist Ally – which is scheduled to be released in October this year – will be an extension of the work Williams has been doing both on and offline to get to "the heart of anti-racist principles and show us all how to truly be better allies," as her website explains.

Writing on Instagram about the new book, Williams said:

"I've spoken a lot about breaking your echo chambers, and that's something I wanted to challenge myself to keep doing, in as many ways as I can. This book, Anti-Racist Ally; An Introduction to Action & Activism, is a pocket-sized introduction to allyship – going through what allyship is, and how to do it in your home, community, work and economic life. It's for anyone who is starting out on their allyship journey, and those who are engaged and want to find the best ways to make impactful long-term change."

But Anti-Racist Ally isn't the only book Williams has in the works. First announced in February, Millennial Black (which will be published April 15 2021) sees the author deep dive into Black womxn's experiences in the workplace, offering a roadmap for those navigating what can often be hostile environments.

In her Instagram post today (July 16), Williams wrote, "I'm going to keep doing everything I can to make sure this conversation stays top of mind for people and to provide tools to help others on their journeys."