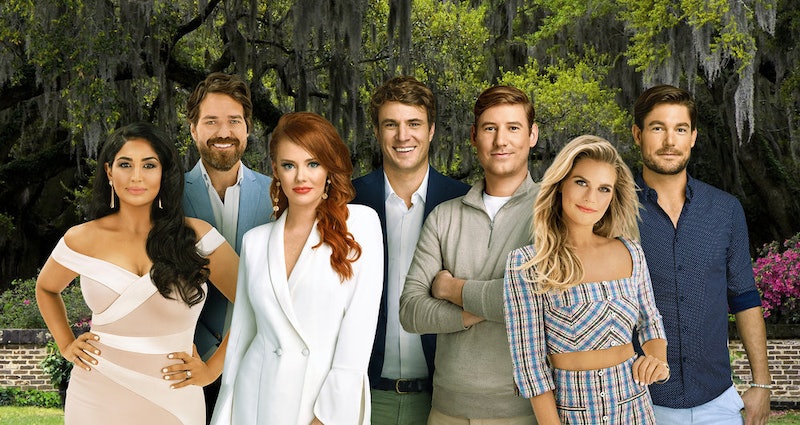 In a year without much new television, Southern Charm Season 7 is here to fill any Bravo reality TV holes in your heart. It's been more than a year since we've caught up with the Charleston crew, and a lot has changed for the series. Season 7 began filming in February, before production shut down due to the global coronavirus crisis. Eventually the series resumed filming, but with more video chats and conversations outside or through patio doors to ensure everyone's health. There probably won't be a big Patricia Altschul party to cap off this season, but rest assured that there will still be plenty of socially distanced drama.

Here's everything you need to know about the upcoming season.

When Is The Southern Charm Season 7 Premiere?

The series returns to Bravo on Oct. 29. New episodes air weekly on Thursdays at 9 p.m. ET.

Which Cast Members Are Not Coming Back?

Season 7 won't feature Cameran Eubanks, Chelsea Meissner, Naomie Olindo, or Eliza Limehouse. Thomas Ravenel is also still out after pleading guilty to assault in 2019. His ex-girlfriend Ashley Jacobs will not return, either.

To fill the gaps left by behind by stars like Cameran and Chelsea, two new cast members have been brought on board for Season 7.

Leva Bonaparte is a prominent business woman in Charleston, alongside her husband, Lamar Bonaparte. They operate in the hospitality and nightlife sectors of the city, which means they should already be pretty familiar with people like Shep and Craig who love a good bar and/or nightclub.

Also joining the show is John Pringle, Shep's friend from college. As a musician, he's spent most of his time in New York and Los Angeles, but now he's ready to return to his South Carolina roots and rejoin his family's business in Charleston.

Bravo released a sneak peek at what's to come this season, and it's already a doozy. Austen and Madison seem close to breaking up again, Shep says someone has tested positive (presumably for COVID-19), Kathryn is feeling some type of way about Thomas' new baby with another woman, Danni and Kathryn get in another fight, and newbie cast member Leva calls Kathryn out for her past behavior — like using a monkey emoji in a conversation with a Black woman. (Kathryn has since apologized.)

The Bravo site also teases a few other things we can expect to see this season. Shep's got a new girlfriend, but quarantine could put their relationship to the test. Craig's business is booming, but his personal life still needs some work. Austen's beer business is threatened by the COVID shutdowns. Patricia tries to set Madison up with some other men while Madison figures out how she feels about Austen — and Shep's friend John seems keen to throw his hat in the Madison ring. That will only complicate things between him and Austen, and it will all bring plenty of drama.