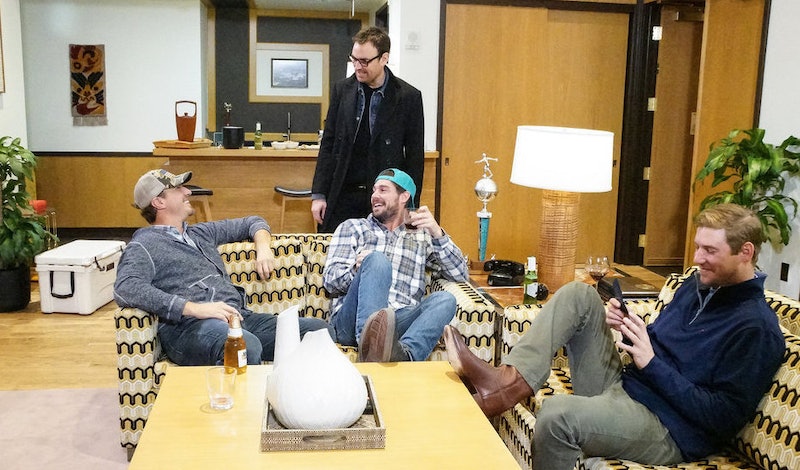 Unfortunately, Southern Charm is not filmed all year long. Yes, the cast does reconvene to film reunion episodes, but there are still plenty of updates that do not make it onto the show. As these Southern Charm cast updates show, the drama doesn't pause when the cameras stop rolling.

For example, Kathryn Dennis has been in an out of court with her ex, and former Southern Charm star, Thomas Ravenel thanks to their ongoing custody battle. And Shep Rose has been tried in the court of public opinion as a result of his social media activities. Then are the relationships. Fans want to know if Kathryn and her country singer boyfriend Hunter Price are still going strong. Or, of course, what's going on with Austen and Madison. There's just a lot to unpack when it comes to their personal lives.

There are other updates too. A lot of the cast members use the time in between seasons to work on and promote their additional projects. Craig Conover has put a dent in his self-professed goal of becoming the "male Martha Stewart." Naomie Olindo's clothing line L'ABEYE is a major success.

Here's everything else you need to know about the cast since Season 6 filming has wrapped.

After some tough love and teasing, Craig is actually thriving as a business man. His company Sewing Down South sells pillows (obviously) and apparel and accessories online. In July, Sewing Down South launched in stores and sold out in an hour. Currently, Craig is in the middle of his Pillow Party tour, taking his products to stores and meeting fans along the East Coast.

And, Craig isn't just thriving professionally. During an August appearance on the Domenick Nati Show, Craig admitted that is seeing someone, but didn't provide any additional details.

Shep Rose has had a Bravo-filled summer. In May, Shep and Austen went to San Francisco with Carl Radke from Summer House. In June, Below Deck star Captain Lee Rosbach spent time with Shep in Charleston. Shep also flew to Kentucky for Jax Taylor and Brittany Cartwright's wedding, and even sat at the same table as Lisa Vanderpump, Ken Todd, and Puffy the dog. Shep, Craig, and Austen also partied with Ramona Singer in the Hamptons in August, the very same weekend that they hung out with Below Deck Mediterranean star Anastasia Surmava.

2019 hasn't been all fun for Shep though. Someone hacked his phone and asked Shep's Instagram followers to send money. After he got his phone back, Shep offended a lot of people when he posted a video mocking a woman collecting cans on the street on Aug. 5. After defending himself in some tweets, he issued an apology and then deactivated his Twitter account.

Let's start with the good stuff. Kathryn is still dating Hunter and according to court documents obtained by The Blast, Kathryn obtained joint custody of her two kids.

The legal drama between Kathryn and Thomas has been nothing short of intense. And very public. In addition to that Kathryn's mother Allison Dennis passed away at age fifty-nine after her battle with cancer earlier this month, which also has to be tough on the reality star.

After two seasons of hype, Austen's beer Trop Hop finally exists. It is currently available to purchase at different locations in Downtown Charleston. In regard to his relationships, Austen and Shep are actually friends, despite their major fight during the Season 6 finale.

As for Austen and Madison, they are not currently dating, but Madison did tell people that she "always has hope" that the two of them will ultimately end up together.

Since the show wrapped, Cameran Eubanks collaborated with Diff Eyewear for her own collection of sunglasses.

Cameran shut down mommy shamers on Instagram. Again. She also added a new member to her family. No, not a kid — Cameran has shared photos and videos of her neighbor's dog Elvis on Instagram for years, but now he is a member of the Wimberly family since his original owners moved to North Caroline.

Truthfully, Chelsea Meissner's life is a bit of a mystery, both on the show and off. Even though Chelsea does manage the rare feat of having a private life as a reality star, she does seem to be having a pretty fun summer. She rode horses in Virginia. Chelsea also surfed in Costa Rica.

Despite the criticism Naomie and Metul's relationship has received from fans of the show, the two of them are still going strong. They recently vacationed in Miami and Saint Barth together. Naomie is also on good terms and actually friends with her ex Craig.

No wonder these people got cast on a reality TV show. They all seem to have so much going on in their lives all year round. Is it time for Season 7 yet?