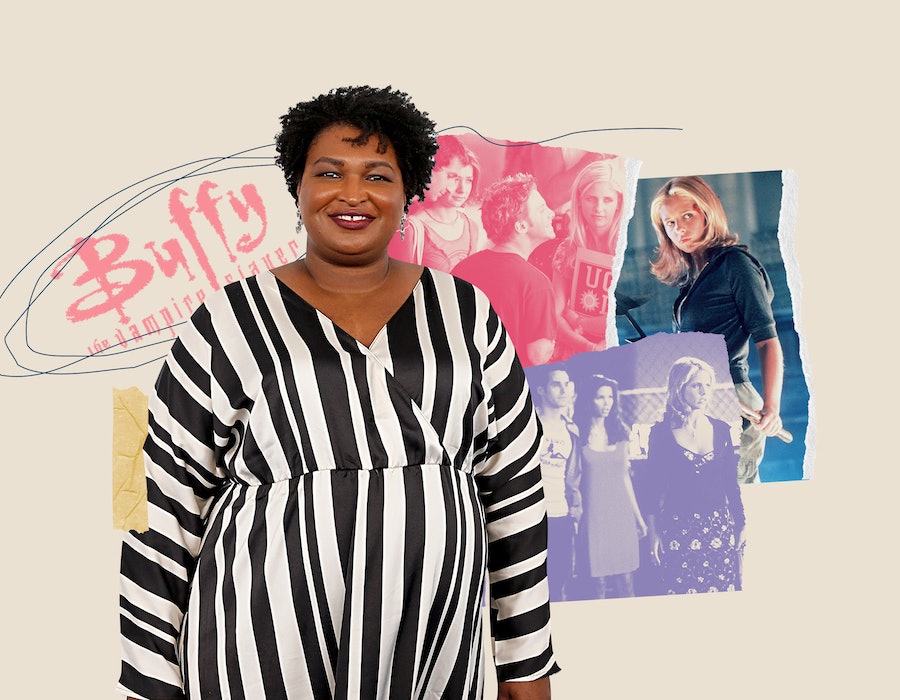 Twenty-five years after Buffy the Vampire Slayer premiered, the show continues to echo through pop culture. In this excerpt from Evan Ross Katz’s new book, Into Every Generation a Slayer Is Born: How Buffy Staked Our Hearts, the author speaks with activist, politician, and author Stacey Abrams, a longtime Buffy fan, about the series’ enduring appeal.

Leader Abrams, what do you think it is about Buffy the Vampire Slayer that makes us not only love it some twenty-five years later but want to discuss and dissect it still?

Buffy centers on a young woman who is incredibly powerful in a supernatural sense, but we also have the opportunity to watch her grapple with the contours of power. What does it mean when you have the ability to do something no one else can and watch how that isolates you from others, but how it also draws people to you. One of the most fantastical relationships on the show is her relationship with Joyce, her mother, and watching her navigate the fact that one of the closest relationships she has is one where she cannot tell a mother the whole of who she is. And yet she has to continue to be embraced by and renewed by her mom. And so I think the complexity of that navigation of power, the intersections of who she is and who she wants to be, the friendships she builds, the friendships she loses, all of those pieces come together to be just this remarkable meditation on power and powerlessness in the same person.

Let me ask about your origin story of how you first discovered the show. I believe you were in law school at the time…

I was. I lived in Atlanta for my internship, and I was staying with friends. They were out at an event, and I didn’t go out. So I turned on the TV and there was Buffy and I got hooked and became a faithful watcher from the very first episode.

The show, especially when it first aired, tended to be looked down upon by a lot of folks, especially critics. Maybe it was the name, maybe it was the premise, the network, a combination. Did you ever receive any flak from friends, family, or other law students for not just liking, but it sounds like loving this show?

No, because my friends understand how much I love television and I never permitted denigration of good TV to enter my space. People that know me know that I love TV, and I don’t understand the point of being ashamed of good stories.

Do you have a favorite Big Bad? I tend to waffle between the Mayor and Glory.

The Mayor for me. The dichotomy between his old-fashioned persona, especially with the moment where he is, like, insisting that Faith drink her milk before she goes out to fight, and his courtliness, but also just the absolute carnage that he’s willing to wreak in order to hold on to power. I found it amusing and again and [chuckles] not that distant from some experiences that I’ve had. I’ve never worked with a mayor like that, but it was a Big Bad that wasn’t all bad. And I think that that’s what was so terrifyingly effective about him. He wasn’t just this evil marauder. He was someone who could be kind and thoughtful and assumed he was doing what was right, even if it meant killing everyone to do it, until of course he wanted to ascend to the absolute power, and we all know what happened there.

Kendra the Vampire Slayer comes into the picture midway through Season 2. She is the first multi-episode Black character to appear on the show. I’ve spoken to Bianca Lawson, who played Kendra, for this book, as well as a number of Black female fans of the show who cited Kendra as a triumph for powerful Black female representation and a failure in how the show both depicted and treated her. How did you see Kendra?

At the time Kendra first appeared, I was just happy to see her exist. The reality is that as someone who has loved television since the first time that I got to watch it, you become accustomed to not seeing a direct representation of yourself. And it meant a great deal to see a Black Slayer. It was of course disappointing that her tenure was so short-lived, but at least the nod was there. And I see things from an arc of not only this being nearly twenty-five years ago but as a writer who faced challenges because my characters were Black, the industry resistance to that kind of multicultural approach, it was always going to be a mark against it. But I think it was an important moment in the show. And I still celebrate the work that she did.

Oh my God! I apologize. Correct me, please.

I said Angel was her first love and the right person for her to love when she was coming into her power. She was with the right person. And I don’t believe in this notion that you are allowed to have only one true love. I think he was the absolute right person for Buffy as she was becoming the Slayer and, with the time they had together, was absolutely the right person. I think Spike was absolutely the right person when she became a powerful, independent woman on her own. And as somebody who actually watched every episode of Angel, I think the split was opportune and I think that the way they developed his character was also important, because he had to become someone else once he reconciled with his curse. And so I think that they actually did the right thing for Buffy, but I resist the notion that one was better.

I’m curious for your opinion on Buffy’s most controversial season, Season 6, which dealt with much more adult themes like addiction and sexual assault. Curious if you had any reaction to the tonal transition of the show that followed Buffy’s resurrection?

As a writer, I can appreciate how hard it is to take a story to that peak where she finally does die in a way that feels permanent and irrevocable, and when she comes back, darkness necessarily followed. And I think it was an important season. It was a hard season to watch; it can be an awkward and uncomfortable season to watch, and I think they did a fairly deft job of trying to navigate it. But when you literally lost everything and your return is not just a violation of the natural order but a destabilization of everything and everyone, that’s a perfect time to really start to think about what does it mean to be beyond the cocoon of college and ask what does it mean to really enter the world where there are no safety nets and where you’ve got to grapple with adulthood in all of this unapologetic goriness. And I think for a show that always tried to explore the dark themes using a deft hand with both humor and allegory, it was probably the best way to tell that story in that moment.

People don’t really talk about the series finale very often within the canon of great episodes that get dissected. What are your thoughts about how the show ended?

I think it was one of the best series finales that I’ve seen. Those are hard to do. It is hard to end a story in a way that feels resonant and that meets the nature of the show. And when you remember how the show began, there was an irreverence to that ending where, yes, they win one more time, but they know it’s just temporary. And the best part of it is how remarkably reminiscent it is of those early Scooby moments where they were all hanging out in the library with a bemused Giles, and they’re sort of ready for the next thing to happen but hoping it won’t happen for a minute because they need to go home and change. That kind of moment was a perfect moment. And I juxtapose it with how they ended Angel, which was one of the best last lines of a show: “I’ve always wanted to fight a dragon.” Angel needed to go out in the middle of the battle; Buffy needed to have completed the battle and just be really exhausted and annoyed knowing that something else was going to come but she wants to go to the mall first.

Are there any lessons that you take from the series that you bring with you to the work that you do today?

This goes back to your first question. The work that I am privileged to do, whether it’s in politics or in activism, it’s about empowerment in a very specific way, meaning my job is to create the space so that I can get out of the way and people can live their best lives. And ultimately that’s what Buffy was doing. She was doing it for herself. She had to get out of her own way so that she could be the best version of herself, but she never forgot that the work that she did was not for gratitude. In fact, most people would never know about it and wouldn’t care if they knew, but that doesn’t absolve you of the responsibility. And I think that’s the most important piece for me that, regardless of the outcome, the responsibility to act is always present.

Excerpted from Into Every Generation a Slayer Is Born: How Buffy Staked Our Hearts by Evan Ross Katz. Copyright © 2022. Available from Hachette Books, an imprint of Hachette Book Group, Inc.

'Into Every Generation a Slayer Is Born: How Buffy Staked Our Hearts' by Evan Ross Katz
Amazon
More like this
Watch The Emotional Trailer For Dolly Alderton’s 'Everything I Know About Love'
By Bustle UK
'Bridgerton' Star Nicola Coughlan Confirms Season 3 Will Focus On Colin & Penelope
By Grace Wehniainen and Alyssa Lapid
Penn Badgley & Leighton Meester Met On A Horror Movie Set Before 'Gossip Girl'
By Jake Viswanath
Selena Gomez’s ‘SNL’ Hosting Debut Had Twitter Gushing Over ‘Barney’ & Wigs
By Stephanie Topacio Long
Get Even More From Bustle — Sign Up For The Newsletter