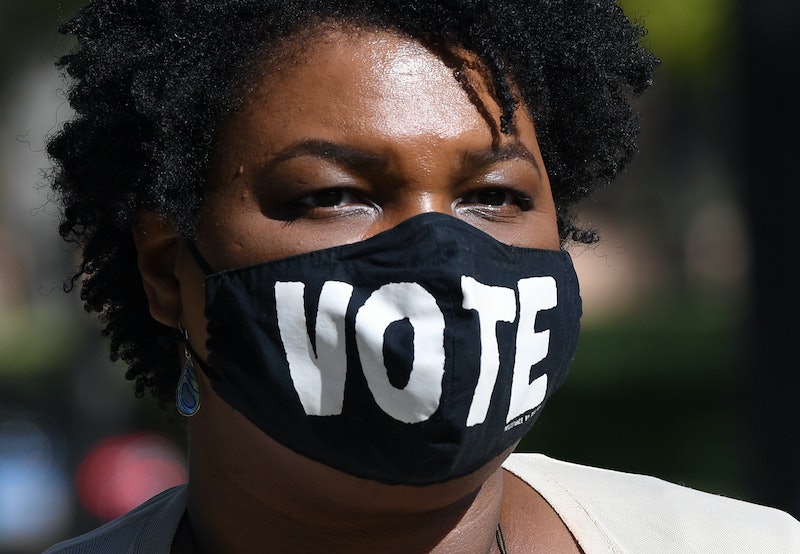 Since her 2018 gubernatorial campaign, Georgia politician Stacey Abrams has been on America's radar as a leader in progressive politics. The founder of Fair Fight 2020, Abrams has campaigned for Joe Biden and encouraged voter registration ahead of the Georgia runoffs in 2021. Now, Stacey Abrams' new book, While Justice Sleeps, is on the horizon, and we've got everything you need to know about the bestselling author's new thriller.

While Justice Sleeps centers on Avery Keene, a law clerk who finds her life turned upside down when her boss, Supreme Court Justice Howard Wynn, goes into a coma after giving her power of attorney. While serving as Wynn's legal guardian, Keene uncovers his personal research into an upcoming SCOTUS case involving medical companies in the U.S. and India. As she digs deeper into his work, Keene learns that he may have been on the verge of uncovering a massive conspiracy that extends to D.C.'s most prominent politicians — and his life may now hang in the balance.

Stacey Abrams' new book is out on May 11 and is available for pre-order today from your favorite bookseller. Here's everything you need to know about When Justice Sleeps and Abrams' celebrated writing career:

Abrams planned to be a bestselling author from the time she was 18 years old, and she finished writing "her first romance novel... during her third year at Yale," according to The Washington Post. Harlequin published Rules of Engagement in 2001, two years after Abrams received her Juris Doctor, under the pseudonym Selena Montgomery.

She Has Published Two Works Of Nonfiction

Abrams published her first nonfiction title, Lead from the Outside: How to Build Your Future and Make Real Change, during her 2018 campaign to become the United States' first Black woman governor. She followed it up with her 2020 book, Our Time Is Now: Power, Purpose, and the Fight for a Fair America, which focused on the impact of voter suppression in the U.S.

The Georgia lawyer and politician previously published eight romantic thriller novels between 2001 and 2009. They are:

Abrams published the novels above under her pseudonym, Selena Montgomery. After penning two bestsellers under her legal name, Abrams is ready to make her official fiction debut with While Justice Sleeps.

More like this
10 Must-Read New Books Out This Week
By K.W. Colyard
The Biggest Differences Between 'Bullet Train' & The Book It’s Based On
By Arya Roshanian
'The Sandman’s Ending Is A Departure From Neil Gaiman’s Comic Book Series
By Kadin Burnett
50 Books About (& Inspired By) Greek Mythology
By Morgan Leigh Davies
Get Even More From Bustle — Sign Up For The Newsletter