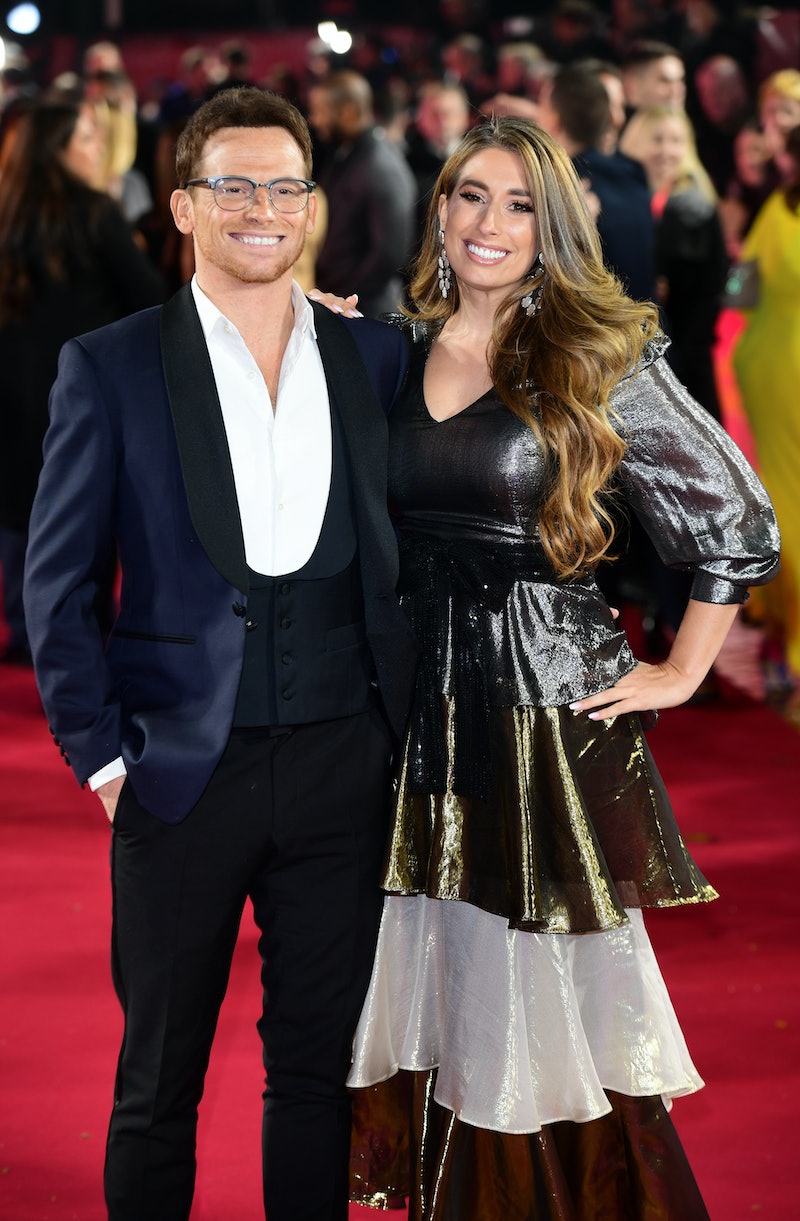 With their candid social media posts and hilarious on-screen chemistry, Stacey Solomon and Joe Swash have become one of the most-loved celebrity couples in British showbiz. After a six year relationship that has delighted fans, the pair made things official this weekend and put a ring on it in a Jewish ceremony at their home. Mazel Tov to the Solomon-Swashes!

While solomon has yetto post any pictures of herself and Swash at their wedding, she did share a behind-the-scenes look at the decorations. The video showed tables and chairs decorated with green foliage, white flowers and candles. Solomon captioned the post: “The calm before our forever.”

In the weeks leading up to the big day, Solomon kept followers up to date with preparations. After sharing snaps of her wedding dress fittings and her special wedding door decorations, she posted on Friday, July 22 to let fans know that she had dyed her hair back to blonde before the nuptials. She then added to her Instagram Story to say that she would be stepping away from social media for the big day so that she could take it all in.

It’s been reported by MailOnline that James ‘Arg’ Argent from Towie performed at the reception. Arg is a longtime wedding singer and performs with The Arg Band. There were other celebs in attendance, with Solomon’s Loose Women costar Linda Robson on the guest list.

So, now that they’re officially wed, let’s take a look back and at Solomon and Swash’s relationship timeline and see how it all began.

The couple originally met on the set of I’m A Celebrity... Get Me Out Of Here in 2010, when Solomon was crowned queen of the jungle. Meanwhile Swash, who had won the competition in 2008, was presenting the reality series’ ITV2 spin-off show, I'm a Celebrity...Get Me Out of Here! Now!. Solomon was in a relationship at the time, and so the pair became good friends. Swash later admitted he'd fancied Solomon back then, but it wasn't the right time.

Solomon and Swash got closer while presenting alongside each other in the 'Extra Camp', for I'm a Celebrity...Get Me Out of Here! Now! At the time, they hadn’t confirmed or denied any rumours of a relationship, rather fuelled interest with a picture that Swash shared on the beach, sunbathing "With the beautiful Stacey Solomon".

Rumours of the pair’s relationship stepped up a notch when they were seen out together in Essex in early 2016. Later that month, the couple confirmed their relationship, with Solomon telling the Mirror: “It’s going really well... We’re having fun, spending time together and getting to know each other.”

Solomon and Swash made no secret of their relationship once it had been confirmed, and made their first public appearance at a gala screening of Game of Thrones in March 2016. Solomon posted a picture to her Instagram of the pair on the red carpet, writing “#happy.”

The couple seemed to be serious about their relationship, even from the early days. In August 2016, Solomon revealed on Loose Women that she and Swash had already discussed having children together. Joe added: “I think definitely babies, that's a good idea.”

Appearing on an episode of Celebrity Juice together in October 2016, host Keith Lemon made Swash 'fake propose’ to Solomon. She later took to Instagram to share a picture of them both, thanking Lemon for giving her “a day of non stop phone calls from family and friends and press”, all mistakenly congratulating Solomon on her faux engagement.

In November 2016, it was announced that Solomon would be joining Swash in the line up to present the I'm A Celeb spin-off show, along with Vicky Pattison and Chris Ramsey.

In July 2017, Solomon let on that she was seriously considering marriage with Swash. In an interview with Closer, she said: “He is such a brilliant dad, which sells it to me the most – he has a great moral compass, and a really good heart.”

“We are really serious about each other, so we want to do things slowly. I can see myself walking down the aisle with Joe – he really is 'The One',” she added.

A month later, Solomon stirred up rumours of an engagement while trying on dresses at Suzanne Neville. Solomon was searching for something to wear to an event, but ended up trying on a few wedding dresses, posting a video to Instagram, with a caption saying she got “carried away”.

The couple spent their first Christmas together, along with Solomon’s two sons from previous relationships, Zachary and Leighton. Solomon shared a sweet picture of the couple with the two boys on Instagram to wish her followers a Merry Christmas.

The couple marked the next big milestone in their relationship by moving in together. Solomon shared a picture of herself and Swash with her two sons, writing: “Finally all in and ready to start afresh together.”

Early in 2019, Solomon joked that she didn’t need a fancy ring for Swash to pop the question; the singer said she would say yes to a proposal from him, even if it was with a ring from Poundland.

The couple took to instagram to share that they were expecting their first child together in February 2019. Swash posted a series of pictures of Solomon asleep, with the caption: “Have been driving myself mad thinking that she's bored senseless of me and can't stand to be awake for longer than 10 minutes of my company... So you can imagine my delight to find out that she still loves me and my company very much she's just been growing a baby.” Solomon shared a picture of her ultrasound scan, with the caption: “Every time I go to write anything I sob so... what he said @realjoeswashy.”

The actor and TV personality announced the arrival of their baby son, Rex, a little earlier than expected, in May 2019. Writing on both his and Solomon’s Instagram accounts, he said the couple were “overwhelmed, overjoyed and apprehensive of what’s to come.”

The couple sparked rumours that they had tied the knot in secret, as they shared pictures from a family holiday on the beach in the Maldives.

After years of hints, Swash finally popped the question on Christmas Eve 2020. Taking Solomon on a walk that they often go on with the children, things looked a little different this time. Swash had organised for the trees to be decked out in white flowers, before getting down on one knee to ask Solomon to marry him. She of course said yes.

It was a seriously busy start to the year for the couple, who revealed in March 2021 that they had moved to a new home (which they sweetly named Pickle Cottage). On Instagram, Solomon gushed that “never in a million years did we ever think this would be. We feel so lucky and are so grateful to have found this hidden treasure closer to our family and further out.”

In a surprise announcement, Solomon and Swash shared the joyous news that they were expecting a baby with a beautiful family photo complete with sonogram.

After pushing back their wedding due to the pregnancy news in 2021, the pair finally wed at home. The wedding had originally been due to take place in July 2021, but it sounds like it was well worth the wait.

This article was originally published on Dec. 31, 2020