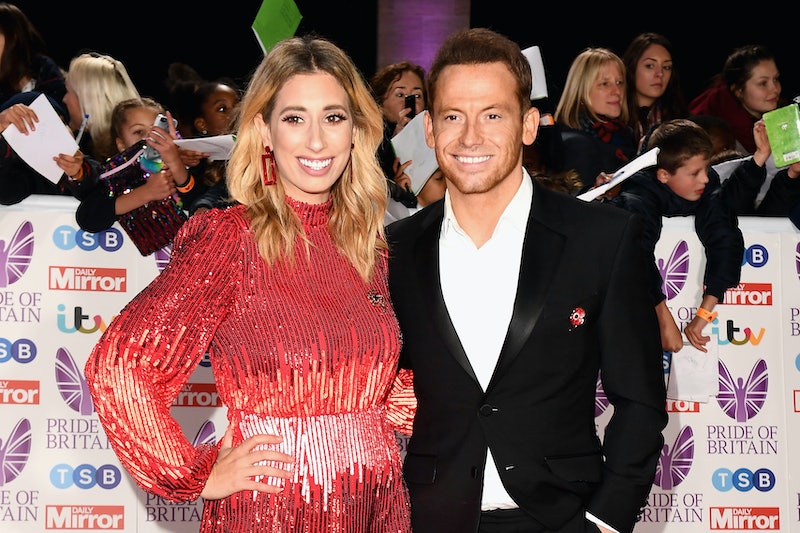 TV's cutest couple have just made the most adorable announcement. To be honest, I hardly even knew that Stacey Solomon and Joe Swash were a thing until very recently. So imagine my surprise when Solomon also confirmed that she was pregnant with Swash's baby. It's like, the best out of the blue news I've seen in a while. If its parents are anything to go by, this is bound to be one very smiley baby, and I can't wait for the incredibly adorable selfies to come. Now with a bub on the way, it's left me wondering, how did Stacey Solomon and Joe Swash meet? It's likely that it happened in front of your very eyes.

The jungle was responsible for this pair's love story. Having won the I'm a Celeb crown in 2009, Swash got a gig hosting its spin off show I'm a Celebrity, Get Me Out of Here! NOW! the following year, which just so happened to coincide with Solomon's go in the jungle. Heart reports that the pair met on set in 2010, so they've known one another for almost a decade, but while they struck up a great friendship straightaway, they didn't actually start dating until 2016.

Solomon confirmed that the couple were a thing in January of that year, when she told The Express: “It’s going really well. We’re having fun, spending time together and getting to know each other.”

They got together after Stacey split from Jackass prankster Steve O in 2015, as the Daily Mail reported, which I imagine Swash was pretty chuffed about. As a source close to Swash told The Express while she was dating Steve O, “Joe really fancies Stacey. He was gutted to hear she is dating someone but thinks he may still have a chance.” Well, he certainly swooped in and got the girl.

The topic of babies first came up fairly early in their relationship as OK reports. In August 2016, Solomon and Swash joined the Loose Women panel to talk kids. After the Loose Women ladies played the couple a clip of Solomon gushing about how much she wanted kids, Swash joked: "It makes me sweat when she talks about babies!" Before adding: "But no no, I think definitely babies – that's a good idea." So, this has been quite a while in the pipeline.

Swash wrote a seriously emotional Instagram post confirming the couple's pregnancy on Friday morning, writing: "I can’t begin to describe how happy we are to be able to share this wonderful news," It's a pretty long post, but to sum up, Swash says, "It’s all very overwhelming and emotional and we couldn’t be happier right now." Love is real, you guys.

Solomon shared the sentiment, but was pretty much speechless when it came to her Instagram post. "Every time I go to write anything I sob so... what he said @realjoeswashy 💜" she wrote under her ultrasound scan. I think what currently looks like a little bean might be the most loved little bean there is.