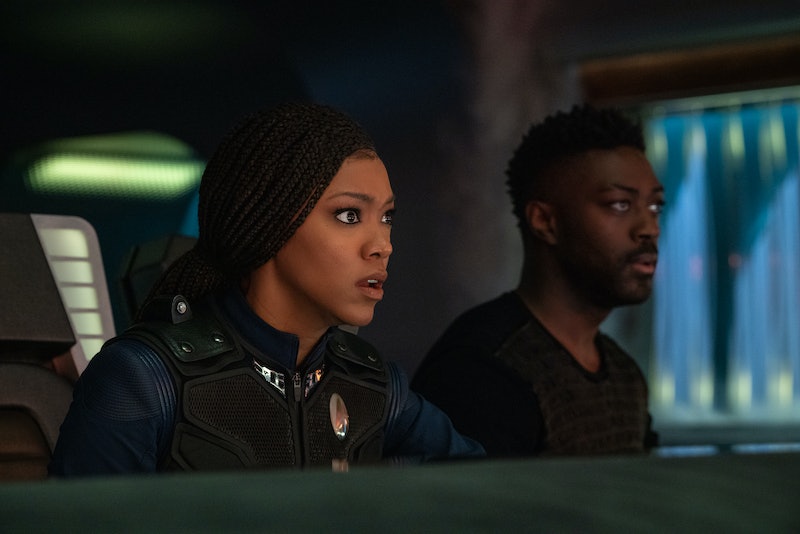 Spoilers ahead for the Star Trek: Discovery Season 3 finale. Star Trek: Discovery may have started as a prequel to The Original Series, but by the end of Season 2, Commander Michael Burnham (Sonequa Martin-Green) and the crew had been shot 930 years into the future. Season 3 saw Trek go more advanced than ever before, not only by introducing new tech but by also featuring the franchise's first trans and non-binary characters. So how did the season end, and how will the story continue in Season 4? Let's dive in.

In an action-heavy Season 3 finale, Commander Burnham and a small batch of the Disco crew fought to regain control of their ship from Osyraa, the Orion Minister of the Emerald Chain. After the Federation and Admiral Vance rejected her lame plan for a peace treaty, Osyraa went full blast into an attempted takeover. The ensuing battle was complex but engaging, with dips into emotionally heavy character scenes as well as some seriously impressive effects — especially considering that all post-production VFX work on Season 3 was done remotely.

After Osyraa's fall, the crew returned to the Verubin Nebula where Saru (Doug Jones), Dr. Culber (Wilson Cruz), and Adira (Blu del Barrio) were miraculously still alive and had convinced Kelpian orphan Su'Kal to face his inner demons. As a result, they discovered the true cause of The Burn: the incredibly high radiation Su'Kal was exposed to while in utero gave him a metaphysical connection to the huge amount of dilithium on the planet, so much so that when his mother died when he was 4 years old, Su'Kal's reaction sent a supersonic shockwave throughout the galaxy, destroying all of the dilithium and the ships with it.

After defeating Osyraa and uncovering the source of The Burn, Vance gave Burnham some news: she's been promoted to captain, and Discovery is hers. All season long, Saru had been struggling to find a calling card similar to Picard's "engage" or Pike's "hit it" when ordering the ship to take off. And when Burnham finally took her seat, she found her own: "Let's fly."

With Burnham now in the captain's chair, we're looking at a thrilling fourth season. Here's what we know so far.

Yes! The series was renewed in October, just as Season 3 premiered. There were rumors that a fifth season was also planned to be filmed back-to-back with Season 4, but the coronavirus pandemic may have put a halt to that. For now, we can only fantasize about what Burnham and her ship are going to be doing in the 32nd Century. Filming for Season 4 began on Nov 2 in Toronto, which means that we'll probably see Discovery Season 4 before we get to see Picard Season 2 or the Captain Pike-led series Strange New Worlds, which haven't started filming yet.

Who's In The Star Trek: Discovery Season 4 Cast?

When Discovery premiered in 2017, Sonequa Martin-Green became the first Black woman to lead a Trek series, saying at the time that she considered herself "undeserving of the endowment." Now that she's in the big chair, Burnham is also Trek's first Black female captain. After surviving her 930-year time jump and spending the year with Book (David Ajala) on the outskirts of civilization, Burham started Season 3 not knowing if she even wanted to be in Starfleet anymore. But her reluctance and eventual devotion to the Federation led her right into the chair where she always belonged, and she'll be front and center in Season 4.

Jones' Captain Saru will return for Season 4 as well, but he closed out Season 3 on Kaminar, helping Su'kal adjust to real life. We can probably expect cast members like Tilly (Mary Wiseman), Stamets (Anthony Rapp), Dr. Culber (Cruz), and newcomer Book to return as well, especially since Book expressed interest in studying up on Federation protocols towards the end of Season 3. Tig Notaro is also coming back as the sarcastic Jett Reno, as is David Cronenberg as the mysterious Federation official, Kovich, a character he tells Variety he still hasn't quite figured out.

Blu del Barrio, who is non-binary, is returning as Adira, along with their boyfriend Grey, who's played by Star Trek's first trans actor, Ian Alexander. Alexander teased Grey's Season 4 return in a December interview with Inverse, saying that he had "a lot more hands-on involvement, like my suggestions about the future for Grey." It will be interesting to see what the show tries to do with Grey since he's sort of a non-corporeal being that only Adira can see.

Finally, as we know, the fabulous Michelle Yeoh won't be returning to the Discovery. She's off on her own adventures, having traveled through an intense time portal a few episodes ago. But we can certainly expect to see Philippa Georgiou again in the upcoming Section 31 series.

What Will Happen In Discovery Season 4?

There haven't been many details yet, but production is underway, and showrunner Alex Kurtzman did confirm that all future seasons of Discovery will take place in the 32nd Century. That means there's no going back in time for the Disco crew, but it's actually pretty exciting that Discovery has brought the Star Trek franchise the furthest into the future than any of the other series, and it leaves unlimited options for where the story could go from here. It's definitely going be invigorating to watch Captain Burnham, in her sleek new gray and red uniform, take charge of the Discovery and bring the Federation back together again. Let's fly.

More like this
Here's When 'The Crown' Season 5 Will Premiere — And What To Expect
By Bustle Editors
The ‘You’ Season 4 First Look Shows Joe’s New Identity And Potential Victims
By Bustle Editors
The ‘Emily In Paris’ Season 3 Release Date Is Here, Plus The First Footage
By Bustle Staff
New ‘Lupin’ Part 3 Teaser Hints That Assane Will “Go Out In Style”
By Brad Witter
Get Even More From Bustle — Sign Up For The Newsletter