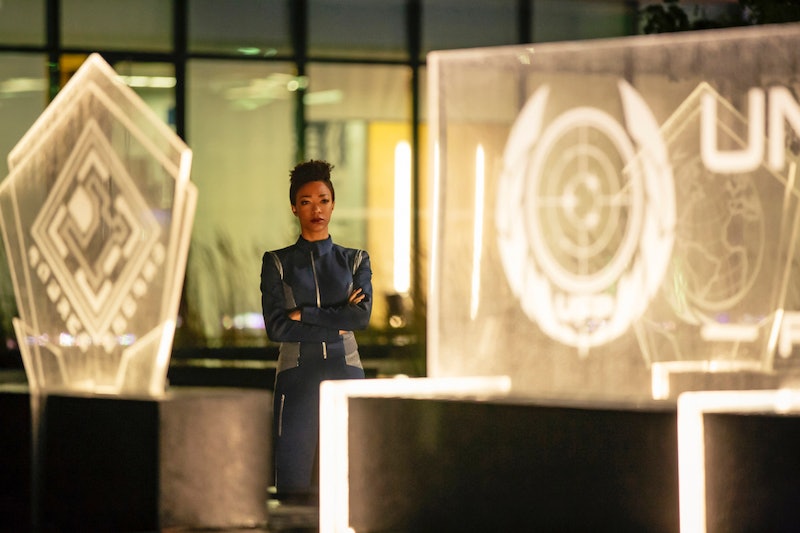 In the beginning, Star Trek: Discovery was seen as a somewhat risky venture. Not only had a Trek show not been on television in over a decade, but this one was going to be on a streaming service, CBS All Access, instead of regular television, and it was going to star (gasp!) a woman of color as its lead character. But if there's one way to describe Star Trek: Discovery after Sunday's exciting Season 1 finale, it's as a success. The first season of the new series brought us epic adventure, a longer trip into the Mirror Universe than any other iteration of Trek, and some of the best female characters in any television show, period.

Discovery also proved itself to be an incredibly feminist series all along, with a long con that outed Captain Gabriel Lorca as a Trumpian type from the Mirror Universe. The final few episodes saw a group of women previously unlikely to even speak to each other team up to bring him down and end a war — with the help of diplomacy rather than outright battle. Plus, there was a surprise cliffhanger visit from our old favorite: the U.S.S. Enterprise. So what's next for the women of Star Trek: Discovery? Bustle hopped on the phone with actors Sonequa Martin-Green, Michelle Yeoh, Mary Chieffo, Mary Wiseman, and Jayne Brook to discuss Discovery's feminism, and what we can look forward to next season.

The Season 1 finale found some of our favorite female characters in interesting new positions. Michael Burnham (Martin-Green) is back in Starfleet, but still learning to live with the aftermath of a violent assault, the loss of a man she loved, the semi-return of her beloved mentor Georgiou, and is still processing the guilt of her mutiny. For Season 2, Martin-Green hopes that we'll get to see Burnham take another step toward redemption because, as she says, "There was a certain amount of cloudiness" to Burnham's return. There's still a lot of guilt, which is a big burden. "The biggest revelation for me as Burnham in Season 1 was that my logic and my emotion were basically clashing in the worst way because of the Vulcan state of mind. Now it’s gonna be about embracing my humanity," she says.

"It’s almost like role reversal," Yeoh says. "When Captain Philippa Georgiou and Michael Burnham first came on, [Burnham] was kind of so uptight, and it was Georgiou who helped to find her sense of humor, her humanity, and helped her to believe that it was good and important to feel. So maybe now Burnham has the opportunity to help Georgiou realize that she no longer has to look over her shoulder. The closest people around her are not there to kill her, that people do work together, trust each other, have families, and share love."

Sylvia Tilly (Mary Wiseman) has definitely become a fan favorite, especially since Wiseman got to drop the first F-bomb in Star Trek history. "It was very fun for me. I love cursing," Wiseman says, laughing. "It just felt like a really organic moment to the character and the circumstance." And now that Tilly has lived a bit as her murderous alter-ego, Captain Killy, in the Mirror Universe, she's gotten a bit of an ego boost. "She’s proven to herself that she can have the bearing and comportment of a captain, but now she knows it's possible," Wiseman says. "The rest of it is just a journey towards that, so suddenly she has way more confidence."

Admiral Katrina Cornwell, whom actor Jayne Brook told Bustle was initially only supposed to appear in three episodes, found herself making a pretty un-Starfleet-like decision. "It was clear on Cornwell’s face that she was heartbroken by going to this dark place," Brook says. "What the writers room is so good at is trying to bring into this Star Trek not this dualistic world of these people are good and these people are bad. They’re trying to show that all of us carry darkness within us."

The biggest change of all may have come for the Klingon Empire, which, as a patriarchal society, now faces a woman in charge. L'Rell (Mary Chieffo) basically took over the entire Klingon planet of Qo'noS through her possession of the detonator to the Federation's covertly planted bombs. The move saw L'Rell go from a sideline supporter to a major player, ready to whip the broken empire into shape.

"She’s the last Klingon standing and she has to own herself. She’s a really good leader and she does have something in her that is fierce and powerful," Chieffo says. The final few episodes saw both L'Rell and Burnham lose their romantic partner, but thankfully without the show spiraling into a cat fight or a sappy story of heartbreak. "What I’m so proud of in the finale is that it’s so much about Burnham and L’Rell looking past their sadness and their anger and becoming leaders."

Women living up to their potential, becoming leaders, taking charge, yet still floundering, and learning about their own emotions, wants, and desires is all part of the feminist nature of Discovery in general. By featuring female characters that are flawed yet powerful, determined yet trepidatious, Discovery has created some of the best women on TV ever. Just consider for a moment that, of the series' few sexual encounters, one features a woman in her 50s (Cornwell) and the other an alien (L'Rell).

"Certainly having that sex scene is very jarring and unexpected for a lot of people," says Chieffo of her character's graphic moment. But "L'Rell is definitely not used to seeing images of women who are in places of power." To get into that headspace, Chieffo spoke with the showrunners a lot about how the character's "whole use of her sensuality in her mind as an alien [comes from a Klingon] culture that has told her that is something that she should use."

For Brook, "It’s about not seeing women as only in relation to men, the sexy girlfriend, the good wife, obedient daughter. It’s strong women, well-rounded [women]. So I think it’s important to have these stories out there, [people are] just seeing women who do all that they can do." Whether that's as an Admiral, a Klingon, or a lowly cadet, each woman has something to contribute.

"It’s something we fell very passionately about and believe very deeply in," Martin-Green says. "It’s this inclusion, and in these more well-rounded, strong female characters. These women are heroes, but then they’re also finding the intricacies of their heroism. And it’s different for every woman. You have these completely different women who are all very strong in their own ways but are also vulnerable in their own ways. I think that’s really important to see with female characters is that there’s not some sort of attempt to behave like a man."

And each of these cast members really couldn't be happier to be a part of such a game-changing show. "It’s been really really awesome," Wiseman says. "On set, it’s so great just because I have people who understand my view that I can talk to or ask questions... just because of the presence of women in the writers room or the producers."

"It’s pretty much been the best experience of my life," Chieffo adds. "I genuinely dream that I could be a part of something that did have this many strong women and have a message that I believe in. It’s such a feminist piece and the women are so nuanced and every one of them is flawed and makes mistakes but they’re allowed room for redemption, and they’re allowed room for compassion."

That feminist view within the story lines of the show stems from having so many female voices on set, from the writers' room to the director's chair to the crew, makeup, costumes, and within practically every facet of the series. The Discovery writers' room features both men and women of different creeds, sexual orientations, and ethnicities, and their diversity reflects the inclusivity seen on the show. But "it's not that they sat down and said, 'We have a critical agenda and we’re gonna write around it,'" Brook says. "They just have these full well-rounded different female characters who are very strong, and they’re all different from each other. What warms my heart is that it’s what we see with men in movies and the stories in our culture."

"I appreciate that we have these female voices everywhere," Martin-Green says. "Because it has to go to every department, because we are shaping the story together. You have to have just as many female voices as male voices if you want to shape something that can truly uplift everyone."

And for the rest of the cast, Martin-Green herself is the shining beacon of the show. "Sonequa is the lead, but she’s also a huge leader, not just for the cast, but for everyone," Wiseman says. "She made it really clear this is a family. We’re gonna support each other, talk to each other. She’s just the exact person you would want to be leading the way on your television show. She really set a tone that’s very warm and familial and to have a woman doing that makes a difference. It affects the energy in the work and makes it feel awesome and really safe, warm and healthy to be creative."

"My mom used to always say 'fish stink from the head down,'" Brook adds. "So when you have number one on a call sheet be Sonequa, who is just the most graceful, welcoming, wonderful person, it just kind of trickles down."

Star Trek has had a black lead in Deep Space Nine, and a female captain in Voyager, but Discovery marks the first time that a Trek series is headed by a woman of color. And as the face of the show, Martin-Green understands the significance and importance of her role.

"You can’t help but feel a little undeserving of the endowment," Martin-Green says of joining the historical ranks of Trek leads. "I certainly believe that art is service, and it’s been tremendous to be able to be a part of the legacy. It’s what you dream about as an actor is to be a part of something that has this kind of impact."

That impact is definitely Discovery's determination to highlight women, feature more diversity, and reflect the real world. Yeoh believes that art and entertainment like Discovery will have a greater effect on the world than we can currently comprehend.

Martin-Green calls it "actorvism," a kind of art activism, which the entire cast and crew of Discovery supports. "They all understand what we’re doing here and how important it is, especially for young girls, and they all understand within the story and as a whole, that this is all really about service."

Some might say that that's too much of an agenda for a TV series to have. Just give them their space battles, aliens, and adventure. But if those viewers don't think Star Trek has been progressive all along, or featured commentary on political situations of the era, they haven't been paying attention. Star Trek has always been about shining a light on our possibilities as humans, to show how society can better itself, to reflect the diversity of our species, and strive for equality. In that way, Discovery, though a big, risky leap, is a major success, and we can't wait to see what's next.

More like this
UK Viewers Will Have To Wait To Watch The Handmaid’s Tale S5
By Maxine Harrison
Mike Flanagan Teases 'The Midnight Club' In This Exclusive, Creepy Clip
By Grace Wehniainen
'Grey's Anatomy's New Intern Got Advice From Dr. Bailey Herself
By Grace Wehniainen
'Reservation Dogs' Season 3 May Finally Mend Bear & Willie Jack’s Relationship
By Gretchen Smail
Get Even More From Bustle — Sign Up For The Newsletter