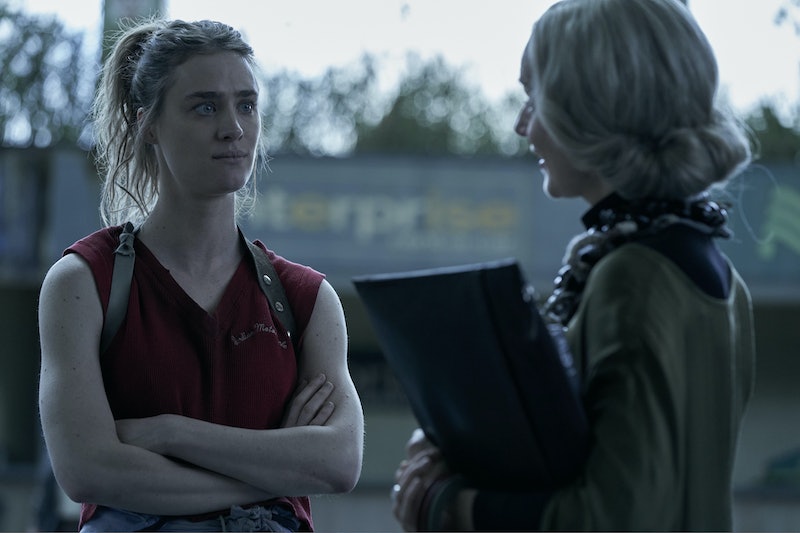 After an emotional reunion, Kirsten (Mackenzie Davis) and Jeevan (Himesh Patel) have reached the end of their journey on Station Eleven. The HBO Max series, which is adapted from Emily St. John Mandel’s 2014 novel of the same name, aired its Season 1 finale on Jan. 14. And though the network hasn’t made any official announcements, it’s unlikely the show will return for a second season.

From the start, Station Eleven was billed as a miniseries. While it’s possible it could take the route of White Lotus and Big Little Lies — two other HBO shows initially intended as one-season projects that have continued anyway — the story covers most of the events from the book. There were, of course, some changes. Jeevan (Himesh Patel), for example, has a much larger role than he did in the original story. In the book, he helps Kirsten (played by Matilda Lawler and Mackenzie Davis in the show) locate an adult on the night of the play and never sees her again. Tyler (aka the Prophet) also meets a much different fate. In the book, he’s unceremoniously killed by his followers, but the HBO series takes a more nuanced approach: He and Kirsten form an unlikely alliance and bond over their shared love for the Station Eleven comic, ultimately painting him less as an explicit villain and more as a tortured antagonist.

In a recent interview with Bustle, Mandel said she was relatively hands off with the series. But she’d been friends with showrunner Patrick Somerville (The Leftovers) prior to working together, and when he proposed departures from the source material — largely over text — she was happy to sign off. “He came to me pretty early on and said, ‘I want to change the setting of the show from Toronto to Chicago.’ I was fine with it,’” Mandel said. “I don't remember if he cleared the Kirsten and Jeevan plot line with me, but for the record, I love it.”

Somerville helming the Station Eleven adaptation freed Mandel up to focus on writing her next novel, Sea of Tranquility, a story of time travel that spans from British Columbia in 1912 to an outpost on the moon in 2041 and follows the interconnected lives of multiple characters. “There's something about being stuck in your apartment and locked down that makes you want to go to the moon, or maybe that’s just me,” Mandel told Bustle of writing the book during the 2020 lockdown.

Sea of Tranquility is set for release in April 2022. Mandel hasn’t expressed interest in revisiting the world of Station Eleven in another book, but it’s possible one of her other novels could get the adaptation treatment. Beyond that, whether or not Station Eleven continues will depend on if Sommerville and team feel there’s more story to mine.

More like this
'GoT' Star Emilia Clarke Says She "Just Can't" Watch 'House Of The Dragon'
By Brad Witter
'Succession' Season 4 Will Be An "Absolute Banger" According To Cousin Greg
By Bustle Staff
Bill & Frank’s 'The Last Of Us' Episode Has Twitter Emotionally Wrecked
By Alyssa Lapid
The 'Gossip Girl' Reboot Creator Is “Looking For A New Home” To Air A Potential Season 3
By Brad Witter
Get Even More From Bustle — Sign Up For The Newsletter
From hair trends to relationship advice, our daily newsletter has everything you need to sound like a person who’s on TikTok, even if you aren’t.