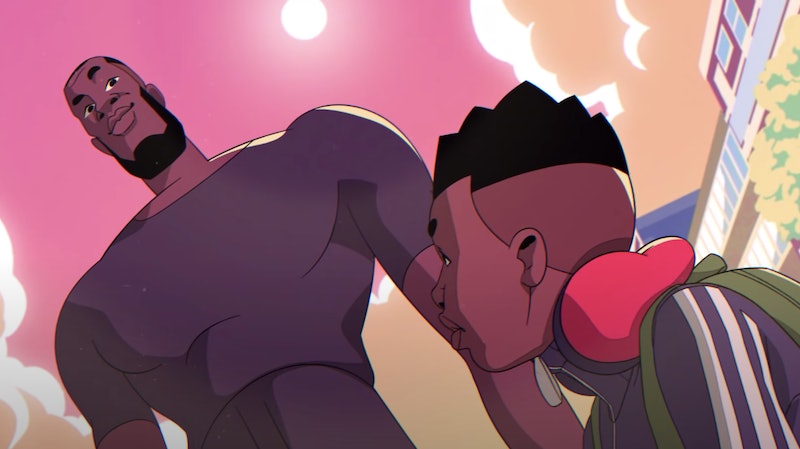 UK rapper and singer Stormzy unveiled his music video for the 2019 release Superheroes today (Sept. 9). The song's poignant message was brought to life by animation studio 2veinte with a classic comic-book-style story about Superhero Stormzy and a young Black boy he takes on a journey with him.

"Young Black king, don't die on me," sings Stormzy in the opening lyric of Superheroes. "You're my brother, you're my keeper. I need you to keep an eye on me." In the video, we see a boy run into the street after a football when a car comes down the road. Suddenly, Superhero Stormzy appears out of nowhere, pulling him to the pavement and from there, the adventure begins.

Stormzy and his companion soar through scenes where Black people are celebrated and uplifted. With shout-outs to Mallory Blackman, Little Simz, Marcus Rashford, and Dave, the video is all about showcasing Black brilliance and highlighting the importance of the recent Black Lives Matter protests and initiatives such as #Merky Books. The video ends with a dedication to the late Chadwick Boseman, the actor best-known for his role as Black Panther in the first major Black superhero movie of the same name.

The video, which was directed by Taz Tron Delix, premiered in schools across the UK, including Pobalscoil Neasáin in Dublin and Manchester Academy. Students at the schools were delighted, and Twitter was full of praise also.

"Stormzy’s #Superheroes is the vibes we needed to get us through last quarter of the 2020 The visuals are lit. The message on point. We live for this," wrote news presenter Victoria Uwonkunda.

Elsewhere, one Twitter user called the video a "dope visual" and another said it was "so beautiful."

Producer Jay Weathers, who was part of the team that produced the video, wrote on his Instagram, "This one means a lot to me, had goosebumps when making this! Proud is an understatement."