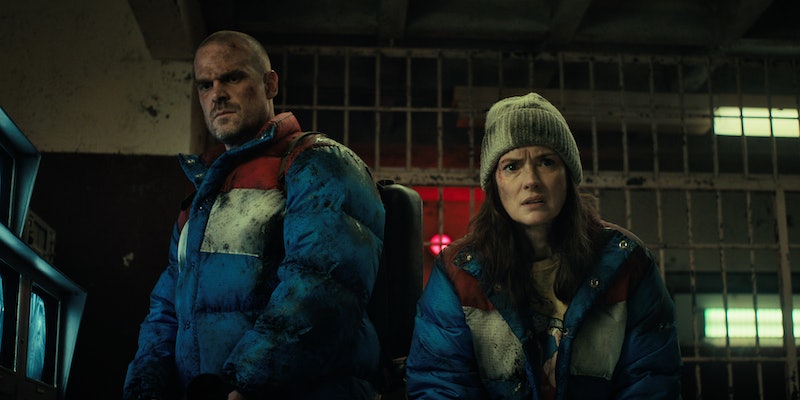 Cast your eyes back to 2016 and the very first season of Stranger Things. Back then, the ‘80s-era sci-fi horror was a fledgling new addition to Netflix and the story’s mysterious tangle of secret government experiments and the hidden realm of the Upside-Down was yet to unravel. The show has gone on to become one of the most-watched series in the world, and has a ferocious cult following — but thanks to a TikTok conspiracy theory involving some of Stranger Things’ earliest plot-points, show creators the Duffer Brothers have been forced to set the record straight.

What Are Stranger Things Fans Claiming?

A week ago, a TikTok video by @erinvibess began doing the rounds, claiming that The Duffer Brothers have been re-editing and changing old seasons of Stranger Things on the sly. “They took out the scene where Jonathan stalks Nancy and takes photos of her,” the text reads. “Are they doing it to make their relationship more appealing?”

In the early scene, we see Hawkins outsider Jonathan Byers searching for his missing brother Will, and taking photographs of potential evidence. When he stumbles across Steve Harrington’s house party he starts taking candid snaps of the group laughing by the pool instead, and in a later scene, when his crush Nancy Wheeler is getting undressed, the shot cuts briefly to Jonathan with his camera pointed right at the window. While it’s true that this particular scene doesn’t catch him in the act of photographing Nancy — we see him lower the camera to point it her best friend Barb instead — the next episode reveals that he was secretly taking photos of Nancy at the same time.

Still, some fans of the show swear that a previous version of the scene was more pointed, and the rumour spread from here anyway. Some claimed that shots showing Jonathan directly in the act of taking creepy photos had been cut out. “Is it me? Or have they edited the episode "The Weirdo on Maple Street” wrote another fan on Twitter. “The episode shows Jonathan taking pictures of Nancy when she's in Steve's room and originally it shows him taking this picture but it seems cut out? Am I going crazy?”

What Do The Duffer Brothers Have To Say About It?

Admittedly The Duffer Brothers inadvertently stoked the flames early on when fans stumbled across an interview with Variety from June. In it, the show’s creators confirmed that they intended to go back and fix a continuity error in Season 2 which accidentally glosses over Will’s birthday. “We’re thinking his new birthday… is going to be May 22nd, because “May” can fit in Winona’s mouth [in the Season 2 scene where Joyce says the date of Will’s birthday],” said Ross Duffer. “So that would be us George Lucas-ing the situation.” Some fans interpreted this as further evidence for the editing theory. At time of writing, the continuity error still exists in Season 2 episode 8.

In a separate interview, meanwhile, Matt Duffer told Digital Spy that “we have George Lucas'd things also that people don't know about."