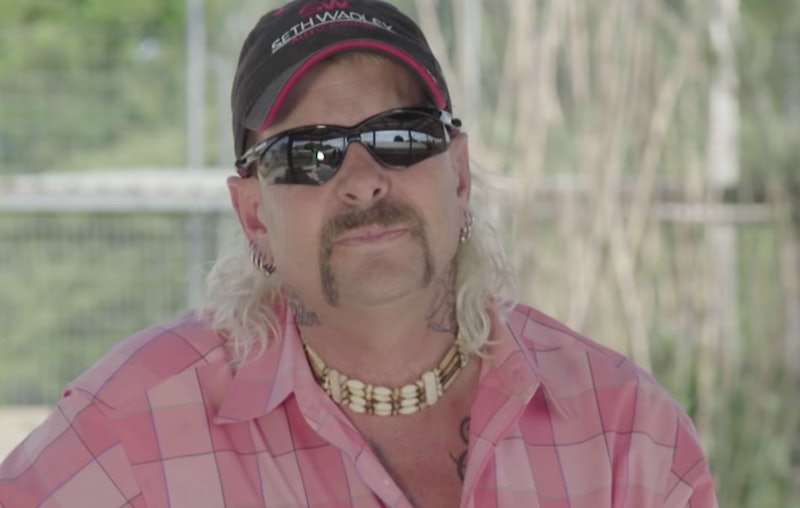 Tiger King may seem like it was released eons ago, but the Joe Exotic intrigue is far from over. A new documentary called Surviving Joe Exotic is coming to Animal Planet. But, unlike Netflix's hit docuseries, this particular doc is going to tell the other side of the story by introducing the animals of Tiger King. The special also features an interview with Exotic prior to his arrest. (Exotic is currently serving 22 years in prison for allegedly attempting to hire two hitmen to kill Carole Baskin.)

Surviving Joe Exotic will showcase the animals who lived at Exotic's former G.W. Zoo and those who were lucky enough to find homes following their time at the zoo, according to The Hollywood Reporter. And the new documentary boasts one of Exotic's final interviews before he was arrested, taken from never-before-seen footage that was filmed in 2018 for Animal Planet's Wolves and Warriors. Viewers won't only see Exotic speak, but they'll also see interviews with some of his former employees at the zoo, including Tiger King fan favorite Saff Saffrey.

As for the animals, the doc will feature visually impaired tigers Kryxis and Kadira, who survived Exotic's zoo. In fact, after being rescued, they both had surgery at the Exotic Feline Rescue Center in Indiana that ultimately restored their vision.

As showcased in the sneak peek above, Exotic is still loving the camera just as much he did in Tiger King. At one point he tells the filmmakers while laughing, "I don't want to look old." A warning to animal lovers: similar to the Netflix docuseries, there is upsetting animal footage shown, including animals being tranquilized in order to be sold. Even though he says, "This is definitely not one of those things that you do to make money," Exotic later declares, "I'm gonna sell them and it's my money." Where Tiger King barely mentioned Exotic's alleged business breeding and selling tigers, Surviving Joe Exotic clearly aims to bring that into the spotlight.

The special airs on Animal Planet on July 25.

More like this
Twitter Can’t Make Up Its Mind About Ekin-Su’s 'Dancing On Ice' Skate-Off
By Sophie McEvoy
Andy Cohen Apologized To Larsa Pippen After A 'RHOM' Season 5 Reunion Dust-Up
By Brad Witter
We Finally Have Some Answers To How Heather Gay Got A Black Eye On 'RHOSLC'
By Samantha Rollins
Hannah Ann Got Engaged 3 Years After 'The Bachelor' & The Proposal Was Dreamy
By Grace Wehniainen
Get Even More From Bustle — Sign Up For The Newsletter
From hair trends to relationship advice, our daily newsletter has everything you need to sound like a person who’s on TikTok, even if you aren’t.