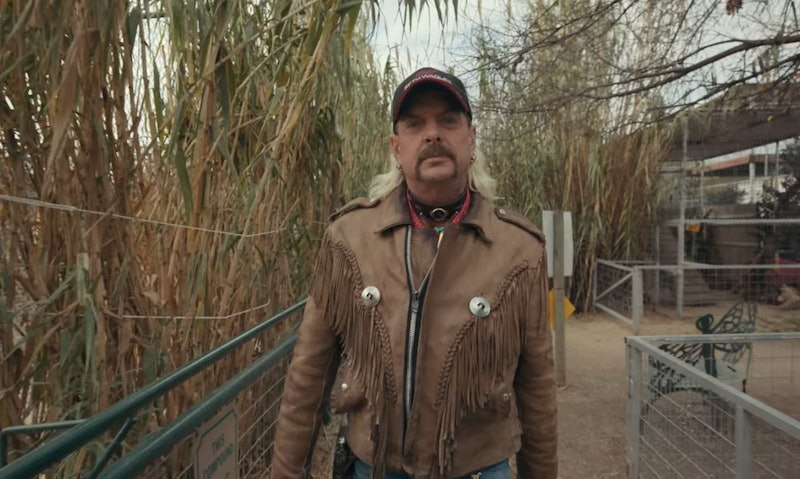 The Netflix true crime docuseries Tiger King: Murder, Mayhem and Madness paints the path that ultimately led to zoo keeper and big cat breeder Joe Exotic's conviction for allegedly attempting to hire two hitmen and endangering wildlife. According to the U.S. Department of Justice, on January 22, the 57-year-old, also known as Joseph Maldonado-Passage, was sentenced to 22 years in federal prison. Because the sentencing occurred so recently, federal records on the Bureau of Prisons website don't indicate his permanent residency, however, that's likely to change once processing is complete.

According to a detailed account published in Texas Monthly, Maldonado-Passage was arrested in September 2018 with evidence that indicated he gave a former zoo employee $3,000 to travel to Florida and kill his biggest rival, animal sanctuary founder and activist Carole Baskin, whom he had long publicly hated for her accusations of animal abuse against him. When that attempt didn't play out, he was then recorded promising an undercover FBI agent $10,000 to do the same.

On the day of his sentencing, according to The Oklahoman, he pleaded to the judge for freedom, claiming he had two "incurable" diseases and needed to return home to care for his ill father. "I know that I've done wrong," he said. "I know that. I will never be here again." He also repeatedly blamed the new zoo owner, Jeff Lowe, for setting him up, and the government witnesses for lying about what he said.

“Wildlife crime is often connected with other criminal activity such as fraud, narcotics, money-laundering and smuggling. Mr. Maldonado-Passage added murder-for-hire,” Edward Grace, assistant director of the U.S. Fish and Wildlife Service’s Office of Law Enforcement, said in a statement, according to The Washington Post. “The Service along with our partners will continue to bring to justice [to] those involved in wildlife trafficking and other assorted crimes.”

A specific date for Maldonado-Passage's release has yet to be officially set, but Baskin's family is comforted by the 22-year sentence. “We feel justice was served," her husband Howard said in an email to The Post. "And we were particularly pleased with the emphasis the judge put on the wildlife charges and on using this sentence as a deterrent to others.”