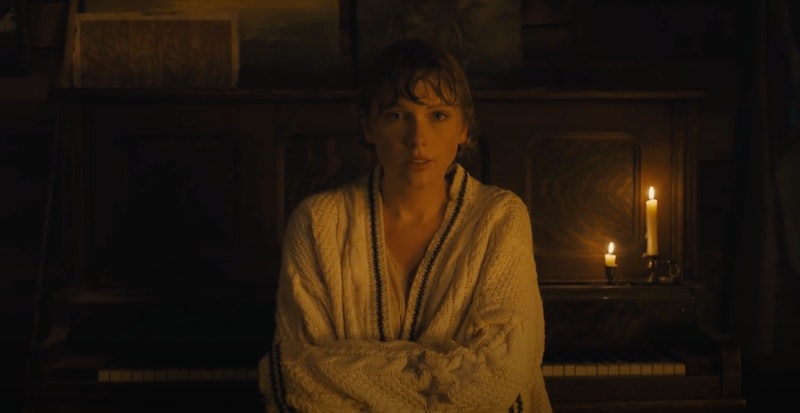 The scarf from "All Too Well" has a spiritual successor. Taylor Swift's new single "Cardigan," from her new album Folklore, tells the tale of two young lovers who think they know everything about the world, not realizing the struggles that lie ahead of them. But the gorgeous visual tells a different story. Taylor Swift's "Cardigan" music video suggests that the first single from Folklore is actually more than just a beautiful love story, but an allegory for her own career and growth.

Swift directed and wrote the concept for the "Cardigan" video herself, which was filmed with strict COVID-19 guidelines. The video sees Swift in her natural habitat at the piano, before her seat transports her into a mystical woodsy wonderland, where the piano becomes a majestic waterfall. But as she attempts to go home, she becomes stranded in rough waters, holding onto her piano for dear life. And when she finally finds her way back, she puts on her old cardigan (which, yes, is for sale on Swift's website) for warmth and comfort. It's a striking and beautiful visual, but not one which lends itself to the typical nostalgic love story, which has fans investigating the video's true meaning. Would you expect Swifties to do anything less?

Many fans think that the video symbolizes Swift's own journey through her ever-evolving career thus far. The vintage bedroom would mark where she first started, as a girl with her trusty piano who just wanted to write music. The forest paradise represents her first years of fame, as she built a dedicated fanbase and garnered accolades faster than nearly anyone. Her being trapped in the river is a metaphor for the tumultuous period of her life, likely the year of 2016, which she has previously described as the "apocalypse." Finally, after she swims through the storm, she finally comes back home, an allegory for finding her old self again and making peace with what she just experienced.

Of course, this wouldn't be a Swift music video without some Easter eggs, of which there are only a couple this time around. If you look closely in the first scene, a portrait of Swift's grandfather Archie D. Swift, Jr. can be spotted on the wall, strengthening the notion that the bedroom setting represents the singer's roots. He's also mentioned in Swift's letter explaining the inspiration behind Folklore, which could be a hint that "Cardigan" tells his story. Additionally, some fans have compared the video's final moment to the "Delicate" music video, as they both end with Swift staring deeply into the camera while soaking wet, which fans interpret as a moment of joy and relief after the storm.

As speculated by fans and confirmed by Variety, "Cardigan" is the first song of what Swift calls the "Teenage Love Triangle," three Folklore songs that tell a fictional high school love story, each from a different person's perspective. "August" and "Betty" complete the trilogy, a possible hint that Swift also plans to release music videos for those tracks. And if there's anything that fans want more of during the Folklore era, it's more gorgeous visuals.