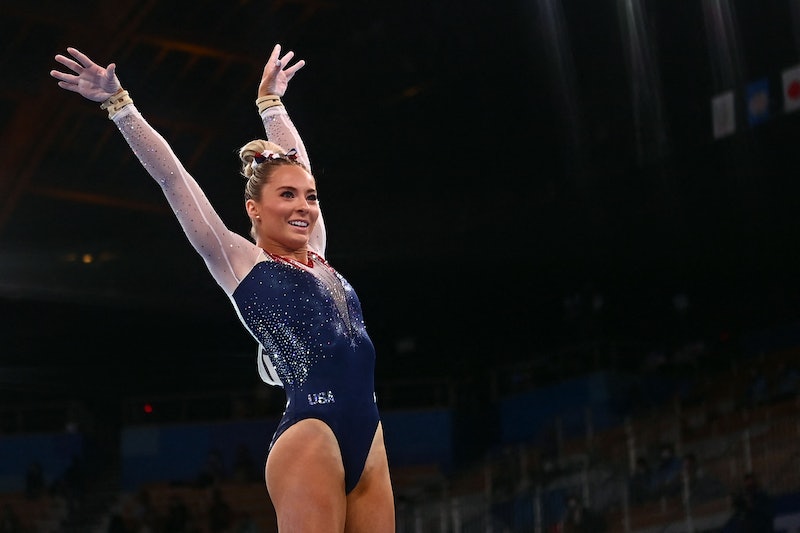 An Olympic silver medal isn’t the only souvenir MyKayla Skinner got to bring home from the Tokyo Games. As a member of Team USA, the gymnast was outfitted with a huge collection of beautiful leotards for the meet, and she showcased them all in a video for YouTube uploaded on Aug. 20. Fans had asked her to give them a look and she delivered, walking them through all 20 (yes, 20) competition leos and training tanks.

The entire collection, which was made by GK Elite, is dazzling. While the eight competition leotards were worn in front of the cameras, the also impressive training tanks (sleeveless leotards worn in practice) didn’t all get a proper showing. Skinner noted in her video that she and her teammates hadn’t posted photos of each on social media, so she held up all 12 while her husband, Jonas Harmer, filmed. She also made sure to highlight some of her favorite details (like miniature star rhinestones) and stories.

When it came to showing the competition leos, Skinner explained why she wore the ones she did — and pointed out the ones she wished she could have donned. It turned out she and fellow individual specialist Jade Carey couldn’t match the members of the four-person team or even wear the same color as them during qualifying. It did, however, all work out in the end.

The “lucky leo” got a big shoutout in Skinner’s video. She showed off the red, white, and blue design that was worn by three different Team USA gymnasts while they medaled in Tokyo. First Sunisa Lee wore the leotard as she won the all-around competition, and then Skinner collected her silver in it in the vault final. Later, Carey wore it for her gold medal-winning floor exercise. Fittingly, the neckline is meant to look like a medal around the neck, Skinner explained.

The leos were just some of the gear the American gymnasts were provided. In another video, Skinner showed off more swag, which ranged from a plush-looking USA bathrobe to multiple pears of sneakers. By the time she had left the Olympics, her luggage count had more than doubled. Unpacking looked like an ordeal, especially as she and Harmer were preparing to move to Utah to continue with school. Prior to the games, the 24-year-old had already started making plans to retire and focus on interests outside of gymnastics.

Though the Tokyo Olympics likely marked Skinner’s last elite competition, her leotard collection will continue to grow. She’s on board for Simone Biles’ upcoming Gold Over America Tour, which is scheduled to take place from late September to early November. They’ll be joined by three other Team USA gymnasts — Carey, Grace McCallum, and Jordan Chiles — and have been teasing an experience with “big pop concert energy.